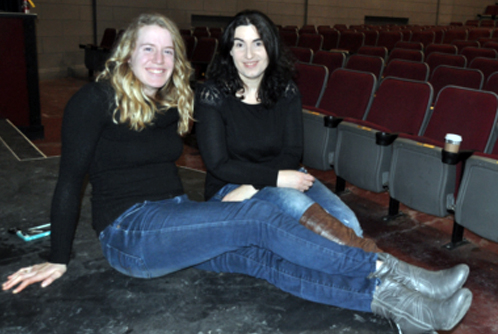 The start of something -PECI grads Samantha Branderhorst, left, and Georgia Papanicolaou are hoping they’ll be able to carve out an audience for their brand of theatre. They’ve started a new company, Shatterbox Theatre, which will premiere its first show at the Regent Theatre next month. (Adam Bramburger/Gazette staff)

A desire to create different, thought-provoking work has led two county women to start their own theatre company.

Georgia Papanicolaou and Samantha Branderhorst met while filling in as technical operators at show in Belleville. The more they talked, they discovered they shared a vision. Eventually, it would lead to Shatterbox Theatre.

“On our way home, we were talking about theatre and what we’ve seen. There was just this spark and we couldn’t stop talking, Papanicolaou recalled.

A veteran of the county’s community theatre scene, Papanicoloau has been actively pushing boundaries for some time in the plays she chooses. She won an Eastern Ontario Drama League festival award for directing The Drawer Boy in 2015 and she also has stage credits in edgy shows like God of Carnage and The Rocky Horror Show. She admits she likes to push the box more than some community theatre groups would deem comfortable.

“I was a little tired of doing things the old-fashioned way and, as an artist, I wanted to break the rules sometimes,” she said. “I like to create worlds with people and teams where you kind of break down those walls.”

Branderhorst — whom many might remember by her maiden name Kuipers —was no stranger to theatre as a PECI and she continued her passion for the stage at Queen’s University. There, she found she could push the boundaries.

“We were doing a lot of experimental theatre at the time. When your audience is young adults looking to see something different, it was really nice because we could change some of the topics I was used to seeing here. It’s a lot calmer and tamer shows (here), that’s the demographic,” she said.

In Kingston, theatre companies were able to explore more taboo subjects in different ways. There, Branderhorst also fell in love with lighting because it used with intensity.

“Coming back here, I didn’t want to go back to creating digestible theatre. I wanted to create something that would leave a rock in people’s shows and take them to ‘I don’t know whether I like that or hate it, but I have to sit with it.’”

As they discussed their vision, Papanicolaou and Branderhorst decided they could work together toward their dream of running a theatre company. Papanicoloau would take on the role of artistic director and Branderhorst technical director.

With their concept of providing thought-provoking pieces, they also decided they wanted to bring in younger people who might not have been involved in theatrical production in the past.

In auditions for their first production, Nick Payne’s Constellations, the company attracted and sought out people who weren’t regulars on local stages. On of the leads, for example, is a nursing student at Loyalist College. “It’s people who were not necessarily hunted down,” Branderhorst said. “We were trying to cast through community pages and things like that.”

Papanicolaou said sometimes people are unaware there are opportunities for young people. She said she knew a few people in their 20s or 30s who came to the county, but didn’t know what to do with themselves. A theatre group can provide a supporting avenue for them, she said.

“You can come as you are and play as you are with us,” she said. Shatterbox plans to mix that influx of youth with a historic setting as they’ve booked the historic Regent Theatre for that first production March 23-25.

“It’s not getting used enough and this allows us to bring in younger people,” Papanicolaou said. “Sam can mentor younger people to use the lighting board, or we can get them to stage manage on this big stage and build sets here. There’s something about the energy of that building.”

There’s something inherently intimidating and risky for a new company to start out with a house of about 400 people, but the Shatterbox team doesn’t necessarily see that as a bad thing.

“Just by starting a theatre group,we’re taking a risk,” Papanicolaou said. “Are people going to come see the show? They don’t know who we are. We’re a lot of young, fresh faces they don’t have experience seeing.”

Already, though, there have been ticket sales and there is a legacy sponsor for Constellations, and that has made a difference.

“I think people are craving for something different. They want something they can talk about,” Papanicolaou said. “I want to sell out — that would be great — but the fact we already have some ticket sales and have a few bodies in the audience makes me feel comfortable.”

She added pricing a show for $20 a ticket at the Regent should be a good selling point.

While Constellations might not be a known show to many people, it appears to be the perfect fit for what Shatterbox is trying to create.

When Payne wrote it, he didn’t offer a lot of directions for how to stage the show in terms of stage directions, props, or event set design.

“It’s a blank canvas,” Papanicolaou said. “Our team can sit down and create from scratch.”

Set designer Jessica Irma Perrone can make her own decisions about how the universe is going to look. Musical director and composer Tony Forbes is writing his own compositions. Actors Riley Blakely and Fiona Dodsworth can offer their own spins on character.

The two-ender, which features the relationship between an astrophysicist and a beekeeper, promises to challenge perspectives. One character has a very nuanced, complex view of the world, while the other’s is fairly simple. They have to find ways to live with one another.

“It’s a relationship between two people. You can see all the ways it’s going to work or not going to work,” Papanicolaou said. “We’ve all experienced the good, the bad, and the ugly of relationships and we wish there was another world out there where we could live the ideal version of us. This play challenges that. Your life will play out in every way possible, it’s the decisions you make that determine how it will turn out.”

Branderhorst added there’s a lot of relatability in both characters. ‘When we read it, everybody was like ‘This is me.” They say ‘I am that awkward,’ or ‘I do those things.’ It doesn’t matter where you are in life or what your demographic is.”

She said it’s also interesting to see a piece that combines art and science in a society where they appear polarized at times.

Asked what would be the definition of success for the company, Papanicolaou said ticket sales is one obvious measure but to her the concept has already proven successful. “We’ve got 12 people on board who hadn’t been involved in any other theatre group. That’s success.”

Branderhorst said they’ve already got people talking and thinking. “People are reaching out to us already and saying ‘When’s your next show.’” The idea of living out a dream, while moving forward with their careers — Branderhorst on a dairy farm and Papanicolaou running a small business — is also valuable.

“When I was younger, people said ‘Get out of here. Move away. You’ll never have a future here or do what you want to do here,’” Papanicolaou said. “Well, you know what? Yes, I can. It’s more balanced and I actually prefer it over being a professional because I can dabble in all aspects of it. It’s not-for-profit, I’m giving back to my community and doign what I love. We’re teaching people and getting young people out to a historical building. This is success.”

With regard to a future beyond March, Shatterbox plans to do at least one show a year in venues across the county and it has plans to showcase some original work and get secondary school students involved and engaged in theatre, both as participants and audience members.