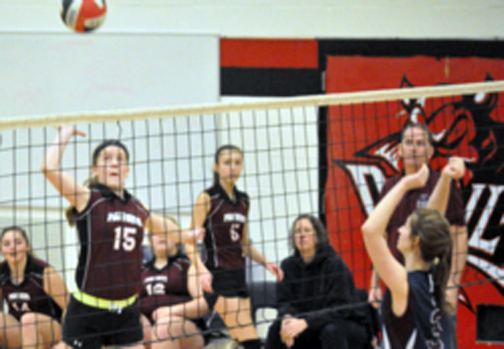 After falling in straight sets to the Quinte Christian Eagles, 25-18 and 25-9, it looked like the Panthers would be in tough again as the St. Theresa Titans took the first set 25-17.

The Panthers regrouped in the second set as Gracie Burris and Trinity Roche each offered well-timed runs for points from the service line as they clawed back in for a 25-23 win to force a decisive 15-point winner-take-all third set.

Trailing 8-5 at the break, the Panthers found their composure, pulling together some nice volleys and strong play around the net to get ahead 13-12. A couple narrow misses out of bounds swung the momentum however and the Titans grabbed the three points they needed to claim a medal.

“It was really close. We absolutely could have done it,” Roche said.

The captain indicated the Panthers had a good talk after the first set against the Titans and they stepped on the court more prepared to play the second and third sets.

“We made sure we were in the right mindset and we knew this meant a lot to us. We started making better decisions and came back from a low score to win the second set.”

Roche said she felt the Panthers played really well at the Bay of Quinte championships, both in preliminary play where they finished atop their pool and in the final against some perennial favourites. She also liked the way the team developed throughout the year.

“We started off a bit rocky, not knowing each other or anything. We actually developed a really strong bond. We hang out with each other at school and I think that bond helped us in our games.”

Roche noted some Grade 9 players earned starting time this year and the future of the junior program appears bright.

Coach Dave Inch was also pleased with what he saw, calling the 2017-2018 season “one of the best we’ve had in years.”

Inch said the entire team contributed to on-court success in some fashion in a year that saw the Panthers take fourth place in the regular season and again in the playoffs.

“The real cool thing is we’ve got 14 girls on the team (contributing). Sometimes you get one player who really shines and you pick an MVP, that sort of thing. As a coach, it’s going to be extremely difficult because everybody pitched in this year,” he said.

Inch said at least eight or nine of his players did really well serving this year, while the others added in different ways. Setting and middle hitting were strengths all season long. The coach also praised Roche for strong defence and offence throughout the year.

One unsung contributor Inch also recognized was Erica Morrow who switched from the setter position at the start of the year to a new role for her, that of a libero or back-row defensive specialist.

“We had never done it before at the junior level, but she shone. She was all over it,” Inch said of the transition.

By virtue of their strong season, the Panthers earned the right to host the AAA COSSA championship in their own gym today. While the competition will likely be stiff with some of the larger schools from the Kawartha region sending teams, the Panthers are eager to show they’re up to the task.

“We get to have our own Panthers there watching us and cheering us on,” said Roche. “It’s going to be a great feeling.”

Peterborough’s St. Peter Saints will be the Panthers’ first opposition at 1 p.m.