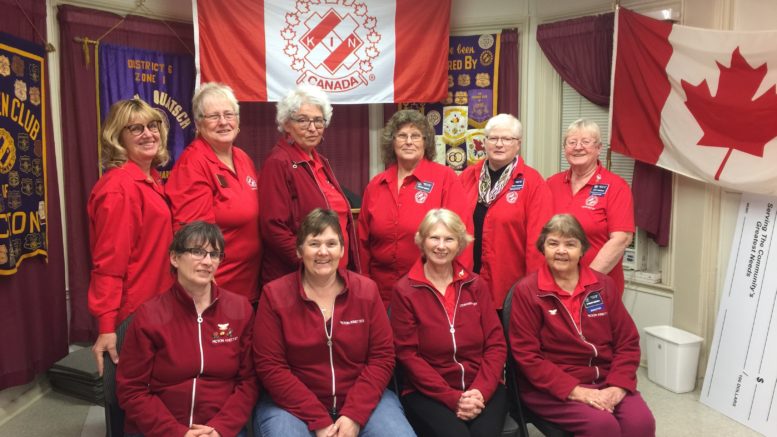 A HALF CENTURY OF HELPING- The Kinette Club of Picton is celebrating their 50th anniversary of formation in March. The current club boasts 13 members and they include (Back from Left) Sandra Hoekstra, Judy McNamee, Diane Torney, Dorothy Benbow, Katherine McGinnis, Jean Thompson, (Front, from left) Gayle Osborne, Kerry Reynolds, Susan Eaastbury and Barbra Kennedy. Missing are Bette MacDonald and Aynsley Osborne.

On March 6, 1968 a collection of 20 local women decided they wanted to do more for their community.

For years the women had been helping their husbands (members of the Picton Kinsmen Club) serve the community but they wanted to do their own service work.

So what better way than to start their own club?

It wasn’t long before the Kinette Club of Picton were known in the community as a group of hard working and compassionate women who were always having fun.

Today the Kinettes are a strong club of 13 very dedicated and hardworking ladies who still know how to have fun no matter what they are doing.

Over the past half century, the local Kinette club has raised over $200,000 for the community and offered over 100,000 volunteer hours.

The club has several continuous programs including HUGS (Help U Get Stronger) Bears which are teddy bears offered to children and adults that need a hug.

Through the Vitamin Program, the Kinettes help expectant mothers that are having a hard time by supplying them with their prenatal vitamins.

The club’s most active program is the Sick and Visiting Program where they help local families and individuals by taking some of the everyday hardships away during tough times.

Travel and food expenses when people are attending appointments or treatments and just spending some time with people, keeping someone company is all part of the Sick and Visiting Program.

The Kinette Club of Picton organizes several fundraisers throughout the year with two of the most popular events being the annual Loonie Action and the Picton Fair where the club is in charge of the parking and back gate at the annual late summer event.

The funds raised from these and other events go back into the community in many different ways including support for the Picton Splash Pad project, the mammogram machine at Prince Edward County Memorial Hospital, Reaching for Rainbows and the ROC.

The Kinnettes also undertake their own projects such as supporting and buying gifts for the Angel Tree Campaign, creating Christmas Baskets and offering bursaries for local Grade Eight students who volunteer in the community.

You may see Kinnetes out in the community just giving of their time. You might meet them at the MS Big Bike Ride, serving you on McDonald McHappy Day or ringing the Salvation Army bell at Christmas.

“We love being Kinettes,” said Kinnette Susan Eastbury. “The secret to our club lasting 50 years is we love our community, what we do and above all we have fun doing it.”

In celebration of the Kinette’s 50th anniversary, the club is holding a Dinner-Dance on March the 10th at the Picton Yacht Club.