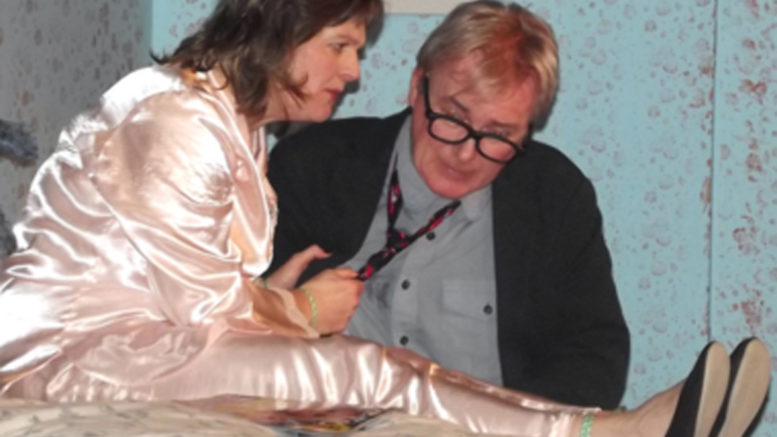 Strategic move - The bossy Monica Lloyd (Susie Mitchell) takes the upper hand as she tries to persuade her current heartthrob Peter Kramer (Philip Knox) to get rid of a nosy visitor during the comedy “Sinners” performed by the Prince Edward Community Theatre. Its run continues this weekend. (Terry McNamee/For The Gazette)

A church manse is not the place you’d expect to find a lot of extra-marital hanky-panky, but in the Prince Edward Community Theatre production of Sinners there is a lot more than even the sinners themselves expect!

The show, written by Norm Foster and directed by PECT founder Lynn Fennell, features a cast of five, and they do a wonderful job of carrying the audience along with them in this funny, twisted tale of murder and infidelity and even a touch of larceny where you would least expect it.

The story revolves around the very demanding and Monica Lloyd (played by Susie Mitchell), the wife of Reverend Lloyd (Brian Gillespie). Monica takes advantage of her husband’s absences to have a fling or two — or is it three?

Monica has a solution for every problem, whether it is a local nosy parker or her own innocent husband coming to the house at an inopportune time: get rid of him or her by any means necessary.

Her current fling, timid furniture store owner Peter Kramer (Philip Knox), has a tough job staying anywhere close to the straight and narrow with bossy Monica on his case, and as things go from bad to worse, poor Peter has some decisions to make. But try as he may, very little goes the way he wants it to, with hilarious consequences, especially when nosy neighbour Diane Gillis (Lita Field) mistakes him for the reverend and spills her deepest, darkest fears to him, helped along by generous helpings of wine (“It’s really good!”).

Knowing that the real reverend is lying dead on the bedroom floor while the widow sits reading The Joy of Sex on the bed beside the body as Diane is drowning her sorrows certainly doesn’t help Peter’s frazzled nerves.

Once the local police chief gets involved, things take a turn for the worse. Chief Roy Cavanaugh (also played by Gillespie) really doesn’t want to investigate anyone’s death. All he wants is to become mayor and spend his time doing easy things like ribbon-cuttings and grand openings.

His wife Carolyn (Bea Howse), who is quite determined that Roy will become mayor, reveals a strong streak of kleptomania as well as a level of bossiness to match Monica’s. Once again, Peter is caught in the middle of everything and finds it next to impossible to get away from these determined women of the parish.

Sinners is the PECT’s second production of its 10th season, and continues on Feb. 23, 24 a at 7:30 p.m., with a matinee at 2 p.m. on Sunday, Feb. 25. All performances are at the Mt. Tabor Playhouse. For ticket information, go to pecommtheatre.ca/current-season or e-mail saveallbonie@gmail.com.

The group’s next event is Doin’ It Solo — An Evening of Monologues by 11 local actors at 7 p.m. at the Acoustic Grill. The spring production will be The Attic, the Pearls and Three Fine Girls at Mt. Tabor in May.