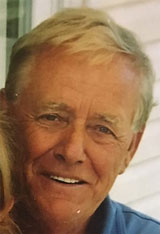 Gil (Gijsbert) Van Solen
On February 17, 2018, Gil (Gijsbert) Van Soelen passed away with his family by his side, from complications following bypass surgery. Gil will be forever remembered by his wife of 56 years, Jane (DeBoer), three children Bill (Annette), John (Lynn), Trish (John) Veltman; his two brothers Wynand (Sheila), Ike (Irene) and sister-in-law Margriet (Bill). He is loved by 8 grandchildren, one great- grandchild and many nieces and nephews. Predeceased by his parents Bill and Nel and brothers Wynand and Bill. Gil was born in Den Haag, The Netherlands on July 10, 1938 and moved to Canada in 1951. Gil was a successful entrepreneur, owning a Painting Contracting company in Milton, a Colour Your World store in Brampton and a Waterbed Store in The Netherlands. Gil’s love of travelling and people took him around the world. He enjoyed his “retirement” years as an active Rotarian in Palm Beach Shores, Florida and Wellington, Ontario. Gil’s strong faith in God is a great comfort. Gil asked us not to mourn, but to Celebrate his Life in a private family service. In lieu flowers, donations in memory to Heart and Stroke Foundation are appreciated. Arrangements entrusted to AINSWORTH FUNERAL HOME, 288 NOXON AVENUE, WELLINGTON. Online donations and condolences at www.ainsworthfuneralhome.com