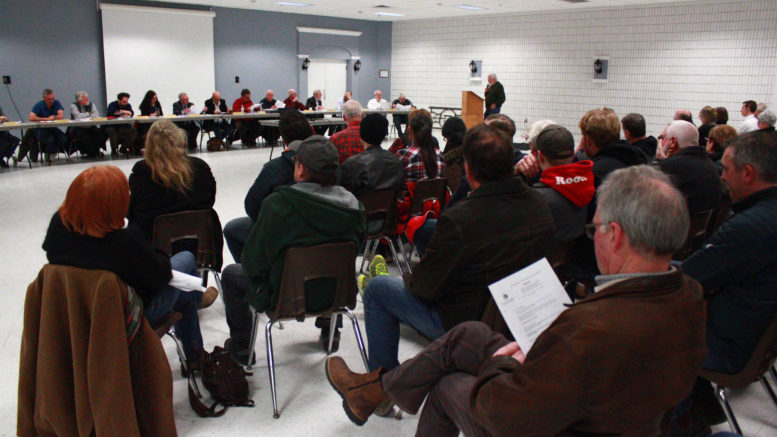 Council will have plenty of information to digest prior to making a decision on the farm tax ratio.

Councillors hosted a special committee-of-the-whole meeting at the Prince Edward Community Centre last Thursday where close to 100 members of the public listened to their peers voice a number of opinions both in favour and against a proposal to adjust the farm tax ratio.

The Prince Edward Federation of Agriculture has requested council to reduce the ratio from 25 per cent of the residential rate to 20 per cent for 2018 in an effort to reduce the cost associated with rising property values. Local farmers have also asked council to recommend that the reduction remain in effect until 2020, after which it would return to 25 per cent.

The issue will appear before council on March 13 for a decision.

The debate was brought to Shire Hall back in 2016 when local farmers said Municipal Property Assessment Corporation (MAPC) valuations of farmland were expected to rise an average of more than 100 per cent over four years in Prince Edward County.

Councillors heard both support and opposition for the proposal during the meeting.

Prince Edward Federation of Agriculture president John Thompson argued that while some would consider the reduction to the ratio as a tax shift onto residential property owners, the real tax shift was onto farmers. 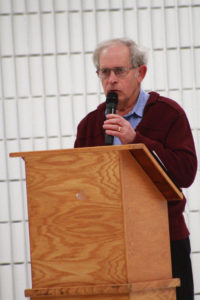 “The effect of reducing the rate to 20 per cent has been spun into a narrative of shifting taxes onto residential,” he said.

He said that’s because the 2018 tax increase was announced using the 25 per cent assumption.

He said each resident would still receive an $8.49 benefit this year due to the higher farmland assessments compared to 2016. Over four years, those residents would receive a benefit of $58.80.

“We think that reducing the ratio in this way would be a fair and defendable policy decision,” he said.

Thompson said the negative impacts of farm families and reduced contribution to the local economy would be more manageable with a lower tax increase of around 70 per cent rather than the over 110 per cent it would be without a reduction to the ratio. He said local farmers have already made concessions since their first request.

“This is a huge compromise from ratios of 20, 17, 14 and 13 (per cent) which would be needed to keep the farm tax load at the previous proportion of the County tax load and farmers taxes going up, just at the same rate as everyone else,” he said.

Bob Burkinshaw said he and his family moved to the county from British Columbia two and half years ago an are establishing a farm on Morrison Point. He said he had long-term concerns, particularly for the next generation of family farms.

“I believe that most fair-minded people in the county would accept such a reduction, if councillors exercised strong leadership and explained that there still would be a very significant increase to farm property taxes by 2020 and that all property tax classes would benefit from that increased contribution from farmers,” he said.

He said he’s tested that belief himself by presenting the issue to neighbours. He said most people he spoke with who opposed the reduction changed their minds after hearing the bigger picture.

“Instead of this issue creating large-scale division in the county, it seems to me that if councillors

and staff rose to the challenge and clearly presented the larger picture to the public, that this could

be an issue which would bring people together rather than increase division,” he said.

However, there were those who opposed the measure.

County resident Gary Mooney said he appreciates the contribution farmers make to the community and to the economy, but wouldn’t support the reduction.

“The situation is similar to that of the housing market in the GTA,” he said. “Young people are having great difficulty in finding houses that they can afford, while older homeowners are very happy with their increased market values and aren’t complaining about having to pay higher property taxes.”

He said the big challenge facing most farm families is financing their first purchase of farmland. He argued if those families can afford that purchase, property taxes would be a minor addition. 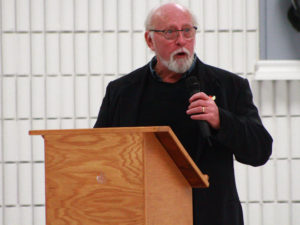 Dennis Fox spoke in opposition to a reduction in the farm tax ratio. (Chad Ibbotson/Gazette staff)

“Doing so would constitute fiscal irresponsibility by council,” he said.

“I’ve heard a lot of numbers, mostly percentages, tonight,” he said. “I am absolutely 100 per cent confused about what these numbers mean anymore.”

Fox, a residential taxpayer, said he had nothing against farmers, but couldn’t support a reduction to the ratio.

“I respect you and I respect the work you do, but please don’t come to me and ask me to pay more out of my pocket so that you don’t have to,” he said. “That’s not fair.”

Council will hear comments on the issue again at Shire Hall on March 13 at 7 p.m.