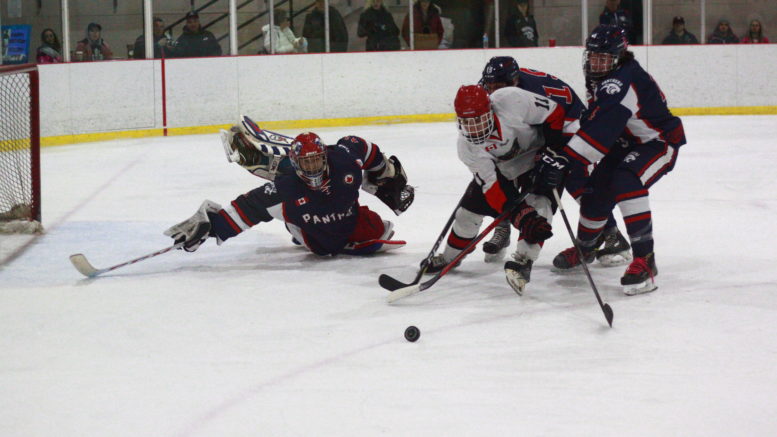 It was a tough end to a solid season for the Picton Pirates.

The club fell in four straight games in their PJHL Tod Division semifinal match-up with the Port Hope Panthers.

The Pirates weren’t able to gain any traction in the series after falling 7–4 in Game 1. They came within striking distance in Game 2 but fell 3–1 to the Panthers last Thursday. They then fell in back-to-back games over the weekend, 5–2 in Port Hope on Saturday night and 3–2 in an overtime heartbreaker on Sunday evening.

General manager Chris Masterson said the team felt confident heading into the series but, eventually, injuries caught up to them.

“We felt like we had a really good group of guys, we thought we had a legitimate shot to win — in fact, we were confident we were going to win that series heading in,” said Masterson. “In that sense, we’re disappointed, on the other hand, we really like how our guys battled to the end.”

The Pirates suffered a huge blow in the second period of Game 1 when Jordon Cannons went down due to injury. The team also lost scorer Nate Boomhower to a broken hand. Boomhower returned to play Game 2 but wasn’t able to play in any other games in the series.

“You’re losing 20–25 per cent of your goal scoring right there and that was pretty tough to recover from,” Masterson said of losing Cannons and Boomhower.

Masterson said the team was relatively injury-free throughout the regular season, but the bumps and bruises seemed to add up as the playoffs approached and the timing of injuries to key players seemed to conspire against the Pirates.

“It was an eerie feeling, it was very much like last season where everything was going well and we got down to the final month of the season and all of sudden we got injuries and suspensions,” he said.

Management plans to analyze the season and discuss any ways to address the injury issue for next season.

“We’re going to sit down and look at what we could change, if anything, to address that issue for next year because two years in a row, it’s disappointing,” said Masterson.

On the positive side, Masterson said, club brass were proud of the way the team came together and suffered through adversity. Many players battled injuries throughout the series.

“They showed a lot of heart,” he said.

The Pirates came to the rink focused on Thursday. Both teams had their chances in the opening frame, but the game remained scoreless. The Pirates were handed a golden opportunity late in the period when Cameron McGill was sent to the box for tripping. With the seconds ticking down on the man advantage, the Pirates were finally able to connect with Will Harrison finding the back of the net on a play from Noah Brant.

With less than three minutes on the clock, the Pirates looked to take the lead into the second. However, with just six seconds on the clock Brad Bollert evened things up.

Both teams continued to play a tight-checking style in the second, but again it was a power play opportunity that broke the deadlock. Boomhower was called for holding seven minutes into the period and Greg Powles took advantage, putting the Panthers on top 2–1.

Through two periods the Panthers held a slight 29–28 advantage in shots.

The game shifted to a defensive battle in the third, both teams keeping shots to the outside. With seven minutes remaining in the period, Port Hope’s Mike Chambers was called for high sticking. The Pirates had several opportunities off the rush on the power play and came close a few times, but were stymied by goaltender Sheldon Calbury.

As the last minute ticked away, the Pirates pulled their goaltender for an extra attacker, but it was Panther Evan Foley putting the puck in the empty cage to seal a Game 2 victory for Port Hope.

Masterson said it was tough to see the game slip away.

It was another tough game for the Pirates in Port Hope on Saturday.

After battling through a scoreless first period, the Pirates snapped the deadlock with Brant scoring on a play from Justin Arnold 4:49 into the period.

The goal stood as the difference until the 12:39 mark when Kallen McFarland evened the score with an unassisted marker. Under three minutes later, McGill gave Port Hope the lead. 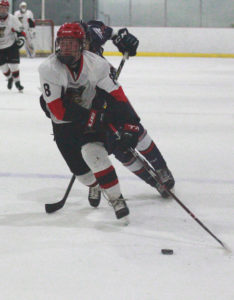 Just as it seemed momentum might swing the Panthers’ way, the Pirates were handed a gift as Chambers took a costly penalty for unsportsmanlike conduct.

On the ensuing power play, Matthew Scott found the twine on a play for Nick Hoey and Kurtis Wood and the Pirates went into the final frame on even ground.

But the Panthers found another gear as the Pirates seemed to sag in the third.

“We literally had five forwards available to us in the third period that could actually go out and skate,” said Masterson. “We had so many injuries, more than half our team was taped up pretty heavily.”

The Pirates were served a bench minor for too many men 5:27 into the period and Foley scored a power-play goal to make it 3–2.

McFarland scored his second of the game at 13:56 to deepen the Picton deficit to two. Bollert added another with 36 seconds on the clock to put the game out of reach.

It was do or die for Picton on Sunday.

Despite a 15–5 shot advantage for the Panthers, the teams went into the first intermission tied 0–0.

It was the Pirates potting the game’s first goal with Tye Eaton scoring on a play from Gerald Bilker and Hoey. Brant was called for hooking with five minutes to go in the frame and Nathan Snoek capitalized with a power play goal at 15:42.

The Pirates refused to back down and just 15 seconds later Chase Burden finished off a play from Brayden Bertrand and Jaydon Wood to make it 2–1 heading into the third.

Port Hope continued to hold the edge in shots and chances in the third and midway through the frame it was McFarland scoring to even things up at 2–2. Goaltender Wes Werner stood tall the rest of the way as the Pirates were again outshot 15–5 in the third.

Picton needed to find some magic in the overtime to force a Game 5, but the Panthers again controlled the play in the extra frame. It was Dayton Kent scoring on the power play at 9:24 of the overtime period to end Picton’s season.

Masterson said the Pirates weren’t happy with the penalty call in overtime, but said exhaustion played a factor in the game. He said the team was short-staffed most of Game 1 and all of Games 2, 3, and 4.

“We were really playing with three lines or less at times,” he said. “We knew we were really holding on in the third and overtime — guys were exhausted.

Against a team like Port Hope, you cannot play with less than a full lineup and we’d been doing that all series and it caught up to us.”

Masterson congratulated the Panthers on earning another trip to the Tod Division final and a chance for a fourth consecutive trip to the Schmalz Cup playoffs. He also thanked all the fans and sponsors who made it a great year of Picton Pirates hockey.

“We think we provided a pretty exciting brand of hockey on the ice and a great group of kids who were good off the ice as well,” he said. “Hopefully the fans weren’t disappointed.”