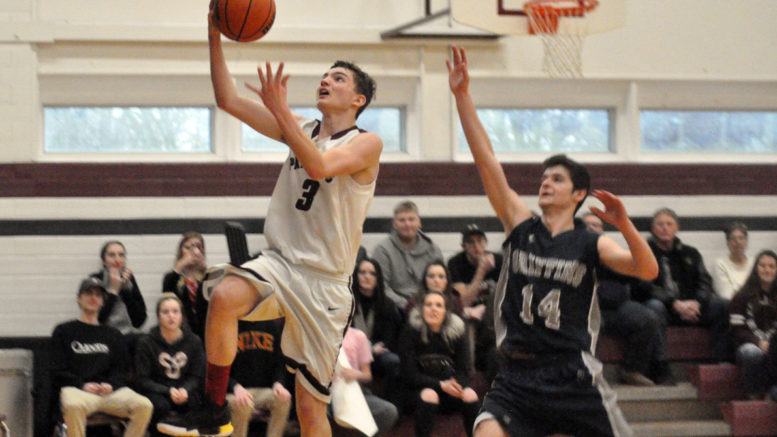 There would be no storybook upset at home for the PECI Senior Basketball Panthers Friday as Kawartha’s top-seeded Thomas A. Stewart Griffins out executed the locals in a 54-42 COSSA semifinal win.

The well-balanced, athletic Griffins squad didn’t show any aversion to the packed, cozy confines of the PECI gym, hitting early to t Pushing the pace – The PECI Senior Basketball Panthers relied on point guard Devon Wilton to distribute the ball as a Grade 11 this year. They expect big things from him in the future. (Adam Bramburger/Gazette staff)

ake a nine-point lead after the first stanza. To their credit, the Panthers were able to match them in pace and play to close the lead to six points by half, but something was a bit off.

“Today just wasn’t our day. We had so many open looks and couldn’t get them to fall,” said guard John McHugh.

The numbers back up that contention. The Panthers shot just 22 per cent from the field and they were unable to much traction under the basket, making it necessary to try to beat the Griffins with outside shots.

Coach Rob Garden said Thomas A. Stewart wasn’t the biggest team the Panthers had seen this year, but they had height and they played with a physical edge. That caused problems.

McHugh was the exception to that rule. He hit five three-pointers in a game-high 22-point showing. It was a fitting performance to cap off a five-year career in which the stellar shooter just kept improving.

“We couldn’t ask anything more of John. He’s been a leader. He’s been an engine for sure and he again scored the bulk of our points,” Garden said. “He’d be the first one to tell you he wanted better and if he got to try this game again, even more shots would fall. We’re really proud of the progression he’s made in five years and he’s going to have a chance, hopefully to play at a college somewhere.”

The young supporting cast didn’t give him much backing, however. Alex Arsenault contributed a gritty 11-point performance, but none of the other Panthers got more than three. Garden says that must change if PECI wants to advance to provincials in the years ahead. The effort, after all, wasn’t lacking.

“It was probably our most consistent effort all year in terms of our energy. Some games our shots fall, but today we missed a lot. In these types of games, you’ve got to hit your shots and you’ve got to execute,” he said. “Whether it was nerves or what was at stake we tightened up and missed.”

Despite the loss, there is optimism the Panthers will be back in COSSA competition in future years. They’re poised to graduate the likes of McHugh, high-energy and work-ethic guard Jordan Stacey, all-around competitor Wyatt Gilbert, and big man Braedan Kelly, who made some huge blocks Thursday but there are is a strong nucleus of younger players on the roster and coming up from the junior ranks. Point guard Devon Wilton regularly ran the offence this year, Arsenault was an impact starter, and Brodie Byford was a volume scorer down low. Jack MacCool was also one of the first players off the bench throughout the year.

“We have eight Grade 11s coming back. That’s the same cohort from last year that was very successful,” Garden said. “I think with another year of rep under their belts — five will play with the Under-17 Belleville Spirits — they will have opportunities for development there. We have to look ahead and look at the positives.”

McHugh also sees bright things ahead for his peers.

“I’m really impressed with how everyone has improved. I’m sure the program will keep going. I wish them all the best.”