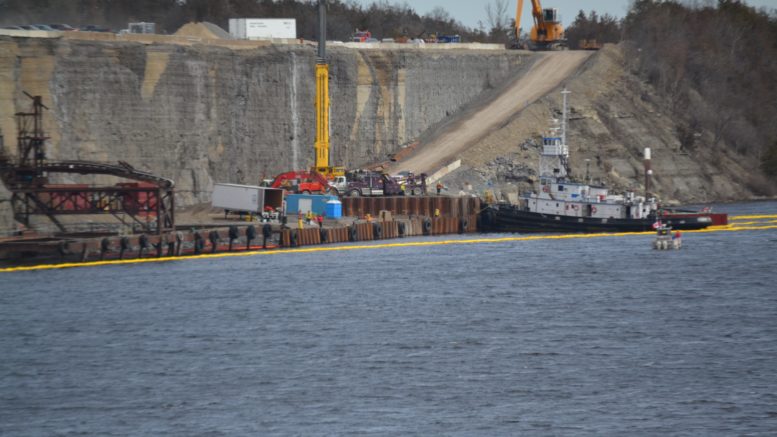 A discovery at Picton Terminals last fall by a Fisheries Act inspector with the enforcement branch of Environment and Climate Change Canada (ECCC) could be leading the ministry to issue directions to the local port operation.

A notice of intent signed by ECCC Fisheries Act inspector and enforcement officer Ian Rumbolt, dated Dec. 18, 2017 and originally issued to Picton Terminals, was given to the Gazette this week and it confirms ECCC received a tip to the Spills Action Centre on Nov. 3 regarding uncovered salt piles and seepage water, possibly containing salt, was entering Picton Bay.

In November, the Gazette was first to confirm the federal regulatory body was investigating to see if the Fisheries Act, namely subsection 38 under the category on fisheries protection and pollution prevention,  was violated by stormwater pollution flowing from a Picton Terminals.

Around 120,000 metric tonnes of sodium chloride are offloaded annually by tanker and stockpiled for winter weather driving applications by eastern regional municipalities and road maintenance companies at the port operation, a practice that predates Picton Terminals ownership by decades however amounts in previous decades might have been somewhat less.

According to the document issued to Picton Terminals, ECCC enforcement officers accessed an adjacent property Nov. 5 and were able to verify that seepage water was entering the property and eventually into Picton Bay.

The Canadian Water Quality Guidelines for the Protection of Aquatic Life indicates the samples go above and beyond the accepted tolerable levels and, in a finding be the ECCC Toxicology Laboratory in 2015, the level of chlorides at the above concentrations would be acutely lethal to deleterious fish and aquatic vertebrates.

The direction offered by the enforcement branch called for Picton Terminals to take all reasonable measures consistent with public safety and with the conservation and protection of fish and fish habitat to prevent seepage occurrences or to counteract, mitigate or remedy any adverse effects that result from the seepage.

Picton Terminals was also directed to develop a plan to properly manage the salt piles and runoff associated with the site and the plan must also identify all seepage from the site as well as providing mitigation measures to deal with these seepages and to prevent further occurrences.

A report on the completion of the above measures were to be submitted to an ECCC inspector or fisheries officer by Jan. 15, 2018.

Picton Terminals have been cited by Ontario’s Ministry of the Environment and Climate Change (MOECC) with provincial officer’s orders to mitigate stormwater runoff and the orders include timelines for tarping off arriving road salt shipments, monitoring wells that are measured quarterly, settling ponds and other strategies.

The port operation is in the process of developing covered storage for the salt piles that would eliminate the need for settling ponds and berms although this developed solution that would need MOECC approval could take a number of years to install.

Picton Terminals owner and operator Ben Doornekamp told the Gazette that “Everything was on schedule” but wouldn’t discuss the issue further until work is completed with ECCC.