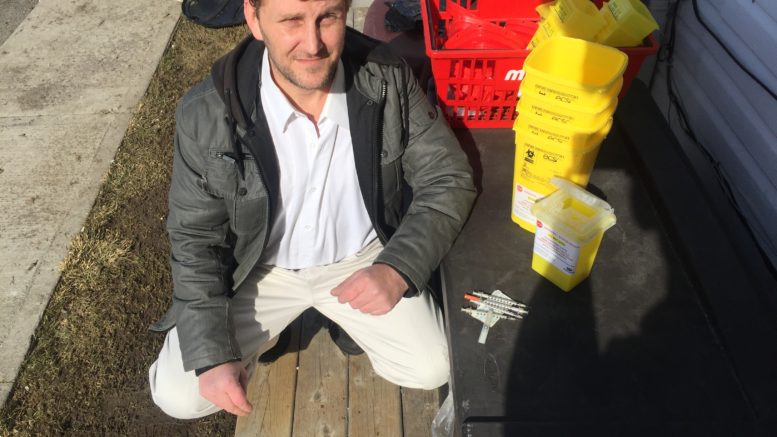 STUCK IN THE SNOW- Picton's Donnie Duffy is warning residents to be wary of discarded dirty needles that have been left on area roadsides and in parks. (Jason Parks/Gazette Staff)

Last fall, the Picton Gazette profiled Duffy’s efforts to keep the community clean by collecting garbage on the road side as a sort of ongoing one-man trash-bash.

But Duffy doesn’t only collect garbage.

And while the receding snow had solved the mystery of the missing flip flop or lost golf club, it’s also left roadsides littered with discarded needles.

“They are really starting to show up,” Duffy told the Gazette on Tuesday. “Most of them are found on Church street hill down to Richmond street and then all the way to Delhi Park.”

Not only collecting discarded needles in the public, Duffy also collects them at homes in the area and has been able connect drug users with supports that can help them beat addiction.

“Change Health has been really good and I’ve been able to connect people with the right supports so that’s helping the community in a different way other than needle collection,” Duffy added.

It’s been 15 years since Duffy’s daughter was stuck with a dirty needle while she was playing at a local park and the Picton resident’s passion for removing these potential health hazards from the street has never wavered.

“It’s awesome Donnie is doing this on his own but it’s not the solution we need for Prince Edward County,” Epstein said. “We need something sustainable and and official strategy to deal with addiction.

As poverty increases for people in the County, addictions become more of a pit fall for people.

Epstein is favour safe receptacles that would be managed by the Public Health in accessible places, a solution that Duffy has been advocating for for some time.

Epstein said he would continue to look into such a solution.

“Most of the users I know don’t want to just chuck them on the ground but if they see police, I think they get spooked by that,” Duffy said. “If we can get these boxes, that will take a lot of them off the street and the ones that are at homes, that number will drop the and keep it out of their garbage and that way the waste service people won’t be at such a risk.”