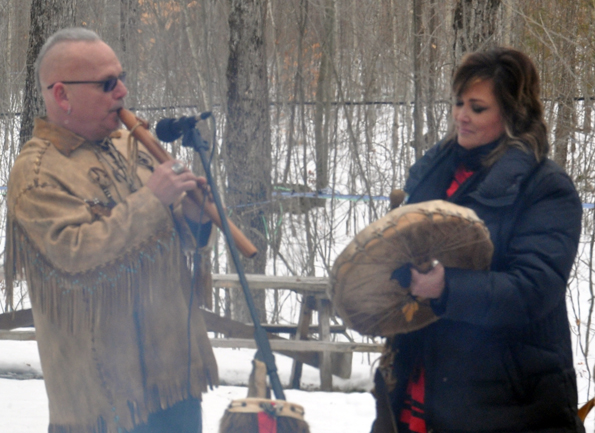 Hosting the ceremonial first tree tapping in the Quinte region has become an honour for the area’s maple producers over the years, but this year’s event seemed more poignant and steeped in tradition.

At Trillium Ridge Sugar Works, about 25 minutes north of Deseronto, local members of the Ontario Maple Syrup Producers Association (OMSPA) trudged across the snow Friday morning and huddled around a bonfire under the expansive canopy of maple trees. Respectfully, they stood and listened as Tyendinaga Mohawk Territory artists Kim and David Maracle led prayers and performed traditional songs to mark the start of the sweet season. Mohawks of the Bay of Quinte Chief R. Donald Maracle explained each spring, there’s a series of rites performed in his culture around the start of maple season. It starts, he said, with a prayer for those who have lost loved ones to lift their sorrow and give them the strength and energy they need to agricultural work. Then, they ask for blessings.

“The next ceremony is the stirring of the ashes to reawaken nature so it would have the spirits of our ancestors and the blessing of the Creator that all of the elements of nature do what they were instructed to do when the Creator made them,” he said. “Of course, what follows is the maple sugar… Each time they do this, our people have a ceremony to ensure that nature continues to do what the Creator intended.”

Maracle asked that this year’s harvest be a good one and urged those gathered to remember the will of the Creator is what gave them its bounty and that is worthy of thanksgiving.

OMSPA local president Chris Koopmans, a producer from Waupoos , said the organization was pleased to be able to share in the Mohawks’ traditional prayer ceremony.

“It was good to see,” he said. “They’re the ones who discovered maple syrup years ago. We’re carrying on that tradition year after year. It’s a sign spring is coming and things are starting to wake up.”

Many people in the region rely on the maple syrup industry as part of their economic livelihood. Koopmans said each year in Ontario, the industry generates $55 million and its spin-off benefits in tourism push the number even higher. With maple syrup recently being declared a superfood — a nutrient-rich food that promotes good health — demand has never been higher.

In the Quinte district, he said there are about 60 OMSPA commercial producers and many more smaller producers who are involved with tapping trees and boiling sap.

“There’s probably over 100 producers or more. In Prince Edward County and in this area, there are also a lot of backyard producers who tap five or six trees for their own consumption.”

This year might be a challenging one for some of the producers in the region, including the host of the first tapping ceremony Terry Gervais, because of uninvited guests.

“Our sap this year — we had an infestation of forest tent caterpillars. A lot of these trees around this area had no leaves last summer,” he said. “I’m expecting a very poor harvest of maple syrup this year. We will get the sap, but I think it’s only going to be about one to one-and-a-quarter per cent sugar content.”

Koopmans said the infestation is wide-spread across Ontario and it probably hasn’t occurred in 15 years or more. In his 25 years of production, he said he’s never seen it before.

“It’s about a two- or three-year cycle. They call it a happy fly. It lays eggs, then the larvae, then it’s gone,” he said. “It won’t kill the trees or anything, but it’s a cycle we have to endure. Terry said he’s had it really bad here. There’s a lot of defoliation on the leaves and there’s not the photosynthesis. When you don’t have photosynthesis, there’s not as much sweet sap.”

He added if the infestation didn’t really hurt last summer, it probably will be worse for producers this year.

That said, Koopmans indicated producers have a lot of syrup on hand to tough it out. Also, for some, early production has been promising.

“We’ve had a warm spell and it’s a bit of an early kick off this year,” he said. “I’ve actually made some syrup. A few producers in the area have made syrup already. It’s excellent quality — really light with excellent taste.”

Koopmans said producers are hoping they continue to see warm days, cold nights, and sun.
He encouraged consumers to buy local and visit sugar shacks to learn more about the process.

Hastings-Lennox and Addington MP Mike Bossio ably drilled the first tap as Prince Edward-Hastings MPP Todd Smith and Gervais offered support. Smith said he’s looking forward to an “exciting time and a tasty time” when the liquid gold starts to flow in the trees. He thanked producers for their economic contributions.

The ceremony concluded with the attraction most everyone was waiting for — samples of the sweet sugar water on fresh-cooked pancakes within the warmth of the sugar shack.