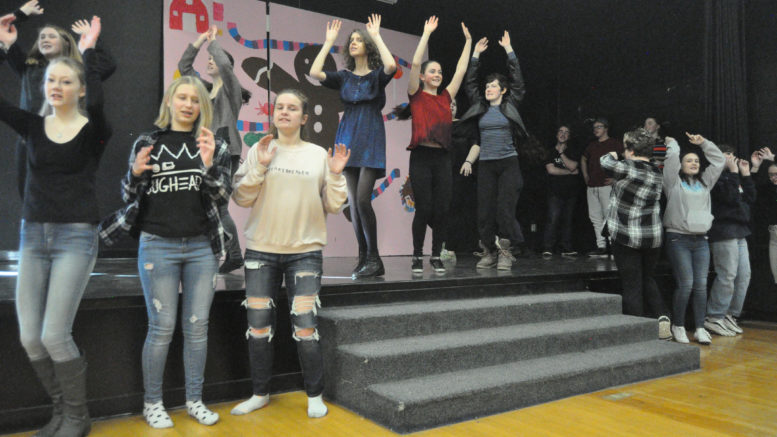 Musical memories - The cast of PECI's The Trouble With Gingerbread works through its choreography in rehearsal last week. (Adam Bramburger/Gazette staff)

Matthew Sheahan’s The Trouble With Gingerbread offers local references, funny jokes for the audiences of all ages delivered by a large, enthusiastic cast 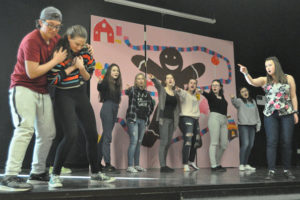 Casting a spell – With the help of the chorus, the Witch (Kelli-Anne Maycock) does her worst to her frightened victims. (Adam Bramburger/Staff)

The Brothers Grimm wrote a fairly wacky fairy tale in 1812 when they penned Hansel and Gretel, but PECI’s musical spin The Trouble With Gingerbread promises to even throw that on its ear with zaniness.

As narrated by a talking dog named Wellington, drama teacher and playwright Matthew Sheahan’s script has Hansel and Gretel wandering off to face the evil witch to ward off a curse the witch cast on their family farm because she was rebuffed by their father. It also meanders into tales of unrequited love and unbridled ambitions on the way to presumably a happy ending that restores prosperity. Sheahan said he wanted to do a children’s story this year because of changes taking place in the school.

“We’re amalgamating to a K-12 school next year, so we thought we would do something that could include them. We have some Grade 7-8s in the cast and we wanted to do something that would bring the schools together,” he said. “It’s really geared for all ages. There’s things in there for kids, things for teenagers, and there’s a lot of stuff in there for adults too. I’m a big believer, being a drama teacher and theatre enthusiast, when I take my kids to see theatre I want them to enjoy it as well.”

One device to bring all of those people in is to include as many local references as possible. There’s references to wineries, county locations, and issues. Lucy Mee, a Grade 12 student who plays Gretel,really liked the story.

“I thought it was so funny and just weird, but in a really good way,” she said. “I remember the first cold reading, there were moments when everyone would go ‘Oh my goodness, I can’t believe you came up with that.’ It’s really different.”

“It’s very different from the original story, which is something that I like,” she said. “I think it’s something a lot of people will enjoy, which is why it’s so exciting to be a part of. It’s something people wouldn’t have thought of, except for the person who wrote it. It’s a story everyone knows but there’s a new twist to it.”

Another way to draw people in is to introduce popular music that fits the narrative. The story is chalk full of 1980s classics that would have audience members tapping their toes and singing along as cast members belt out notes, accompanied by a pit band under the direction of science teacher Steven Mee.

The cast members say they’ve really had fun with the music.

“It’s a lot of songs I grew up with. My parents played them. I do actually really like the music in it,” Maycock said.

Julie Scott, who plays Hansel, is happy with the choice to return to a musical for the last play of her four-year PECI theatrical career after taking part in a Rudolph adaptation Sheahan wrote during her Grade 9 years.

“It’s very fun to have another outlet from everything being pent up through the show. Singing is something I do on the regular, so its nice having it added to the show. It’s just a double bonus.”

Although the addition of music has meant many more hours to a rehearsal schedule which started in October, both for choreography and for singing practice, it’s been welcomed.

Mee added it’s been fun to be walking down the hallway between classes and hearing other cast members humming the songs. She’s also liked the chance to be able to create choreography for some of the numbers.

One encouraging aspect of doing a musical in a high school setting is that many students can take part. Sheahan said there’s a large chorus comprised of mainly Grade 9s and Grade 10s that have a lot of parts throughout the show. It gives a chance for many to have fun entertaining.

“Even if you can’t sing, it’s really about owning the song. If the kids on stage are having fun, everyone is going to have fun.”

Mee really likes the opportunity of working with such a large group on this production as well.

“It’s so much fun. We have so many new Grade 9s who have never done a show before at the high school. It’s really fun to see them experience this for the first time. Having the big cast is nice, we all get along so well.”

Elise Ens, a senior drama student has had the difficult task holding that group together through its busy schedule as a stage manager. She said after doing a lot of behind-the-scenes work on shows in the community and at PECI, she felt it was a natural step for her between being a stage hand and a director. She said the group has been fantastic.

“It’s a lot of work and a big juggling act. We take about the same amount of time to get the show done (as other forms of drama) but there’s a lot more to do,” she said. “The cast is great. They all work really hard, show up consistently and want to be here.”

Asked about what they hope audiences will take from the show the cast spoke about entertainment and about moral messages.

“The message I’d like them to take is that things don’t always go the way you planned and that’s not a bad thing. As long as you stay positive, you can keep pushing and try to make a happier ending for yourself than maybe the road you’re set to go on,” Maycock said, adding the characters are strong.

Ens added the story will be lighthearted throughout, but dynamic as it includes back stories and intrigue.

“I hope they just enjoy getting to see two sides of this story. It’s never just black-and-white. There’s never just a villain and a hero.”

Scott and Mee indicated they both saw a message about being yourself, following your dreams, and not giving in to social message.

“It’s a very deep moral for a Hansel and Gretel retelling but I really like the message of it,” Mee said.

The Trouble with Gingerbread runs Friday at 7 p.m. and Saturday at 1 p.m. and 7 p.m. at PECI’s Gym A. Tickets are free. Prior to the public performances, matinee shows are also planned for elementary students throughout the county and PECI students.