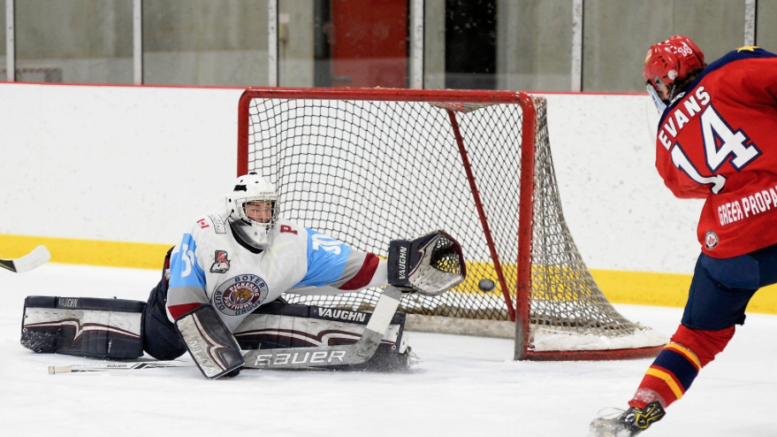 It’s so far, so good for the Wellington Dukes.

The local Jr. A outfit has taken a 2-0 lead in their Ontario Junior Hockey League Northeastern Conference Quarterfinal series against the Pickering Panthers with a pair of wins.

On Friday in Wellington, the Dukes opened the best-of-seven set with a 6-3 win in Game One that saw the clubs combine for six goals in a wild second period.

On Sunday, Wellington had leads of 1-0 and 2-1 only to see the hosts fight back each time.

After Pickering captain John Argier scored 1:24 into the final stanza to make it 2-2, Wellington’s Declan Carlile netted what would be the game winner at 4:06.

Mitch Martan scored into an empty net for a second consecutive game to ice the Wellington triumph and make the final 4-2.

Through the first two games, the storyline seems to be ‘Anything you can do, I can do better’ with Wellington playing the part of the superseding playmate that seems to find a way to get on top.

Friday night’s contest was the first chapter in this opening round series and, after 20 minutes of feeling each other out, the Dukes struck quickly in the second stanza.

Martan got it started with a nifty backhander over the shoulder of Pickering’s 16-year-old starting goaltender Ethan Langevin at 1:19.

Just 34 seconds later, it was Ben Evans slicing through the Panthers defence and out-waiting Langevin before snapping it into the Pickering net for a 2-0 lead.

But fortune would favour the Panthers at the midway point of the frame as poor play in the Wellington end by the Dukes allowed Tyler Giamov to find Massimo Pertricca in the high slot at 10:14.

Wellington’s first powerplay of the series quickly came undone just under two minutes later when Mason Snell’s pass attempt caused his stick to shatter and provided Pickering bruiser Adam Wheaton an break away which he slipped under Wellington starter Jonah Capriotti to make it a 2-2 game.

Wellington, their credit, didn’t implode and battled hard to restore a two goal margin and their third of for in the period came by way of some impressive forechecking.

Martan, not known for his physicality, was able to knock down Andrew Poulias at the blueline and sprung Colin Doyle on a partial break.

Doyle would draw a delayed penalty and, after a scramble at the Pickering net, Mason Snell was able to knife it home and give the Dukes a Game One lead they would not relinquish.

Later in the frame it was Teddy McGeen slipping a nice backhanded effort under Langevin of a slick pass by Evans to spring a breakaway.

In the third after Brock Traill banged home a powerplay goal to get the Panthers back to within a goal, Andrew Rinaldi busted his way to the net off the rush and stretched out Langevin, sliding it home a 11:40 mark.

With Langevin on the bench early for an extra attacker, Doyle fed Martan with about under four minutes to go for an empty-netter to make it 6-3 and earn the Wellington captain his third helper of the game. 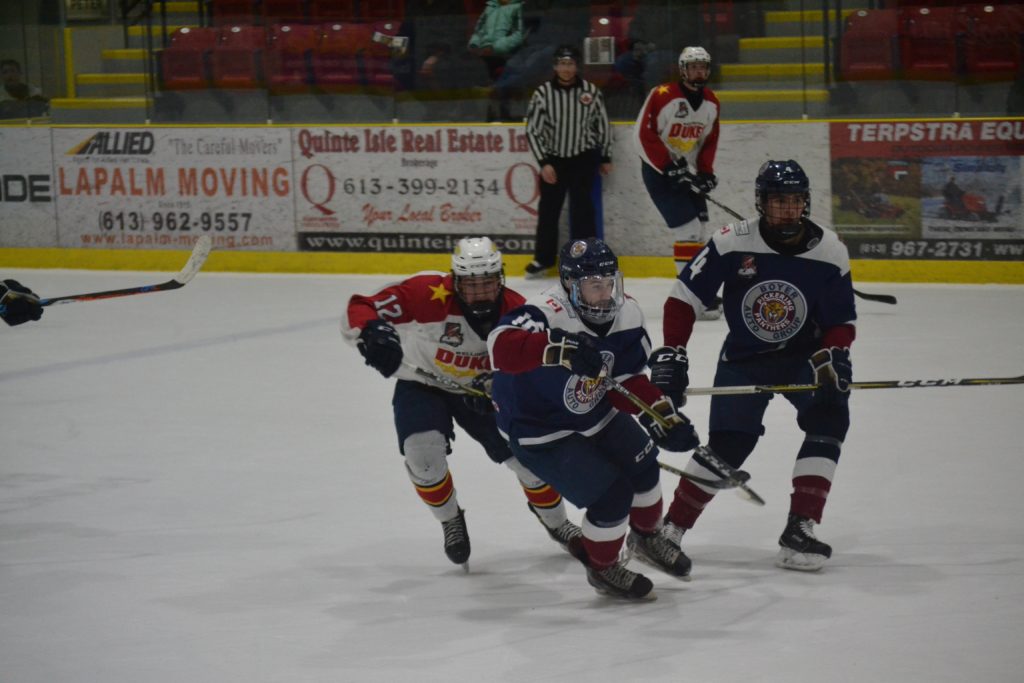 On Sunday, Pickering was able to tie Wellington three times but still was unable to gain their first lead in the series.

Dawson Ellis was able to spot Evans with time and space and the former Ottawa 67 snapped the puck past Langevin at 6:38 of the first to give the visitors a 1-0 lead.

In the second, Andrew Hughes got his first of the series to tie the contest but a Doyle powerplay goal with under three to play in the frame again ensured Wellington would had to the dressing room with a lead.

Argrier’s first of the series tied it but it was Doyle finding Carlile just over three minutes later to give Wellington the edge they would not let go of.

The goal by Carlile was reassuring for Wellington fans who watched the mobile defender land with a thud in the third period of Game One after getting belted on the boards by Panthers blueliner Mitchell Doyle.

Carlile attempted to return to the contest but couldn’t play a regular shift in the late going of Friday night’s affair.

Wellington will look to take a strangle hold on the series on Tuesday night when they host Game Three. Puck Drop is 7:30 p.m.