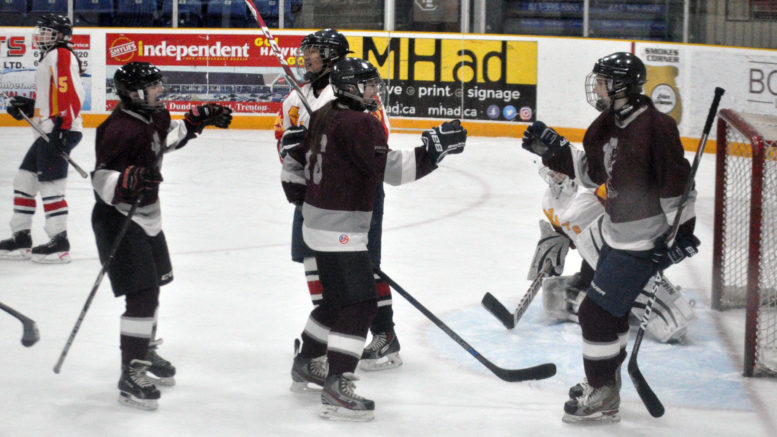 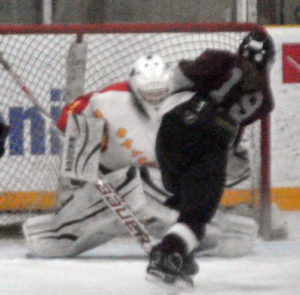 Tied 2-2 with the Bayside Red Devils in the waning minutes of the bronze-medal game, the Panthers got a clean break out of their own zone. Defender Maddy Young made a nice fake to shake off a forechecker behind her own net. She made a short pass to Brooke Jackson, who chipped by a defender on the wall, then hit a streaking Sydney Davies through centre for a breakaway.

Davies delivered a well-placed shot over the glove hand of the Bayside goaltender to give the Panthers a lead with just 1:14 remaining in the game.

The Devils had no intention of giving up, however. They buzzed around the offensive zone as time ticked away and the Panthers had trouble getting the puck outside the blue line. It came back to Bayside defender Payton Smith at the point. She let a hard slapshot off through heavy traffic that eluded goaltender Maddy Rowbotham and sent the contest to overtime.

Just 55 seconds into a back-and-forth extra frame, Bayside’s Kiyara Nelson found the net with her second goal and fourth point of the game to dash the Panthers’ hopes in a 4-3 decision.

Kendra Marion had a two-goal effort in a losing cause, while Young was in on all three Panther goals.

Earlier in the day, the Panthers lost their semifinal 6-0 to a strong Moira Trojans team that went on to win the school’s first — and thanks to consolidation, last — Bay of Quinte championship.

“Game 1 was pretty tough. They’re just a better team and they played better today,” said Panthers coach Laurie Spencer. “Game 2 was anybody’s game. We were flat in the first period, but we seemed to step it up in the second. We kept it clean, we stayed out of the box, and we had our chances.”

With only three remaining players from the Panthers’ 2015 run to the OFSAA consolation championship and only one new Grade 9 addition, this was expected to be a tough, building year for the program, but the girls came together on the ice and showed their desire to compete.

“We were determined. There was a lot of passion on this team and everyone wanted to go really hard all the time,” captain Jackson said. “We had some tough competition, but we fought hard against some tough players and won some games we weren’t expected to win, so that was nice.”

The Panthers also knew they had a strong last line of defence behind them as second-year net minder Maddy Rowbotham continued to shine in playoff competition.

“She’s kind of saved some games we should have been out of,” Jackson said. “She has really good reflexes, she’s kind of like Spiderman around that net.”

Spencer said the Panthers were able to persevere with a small bench as they only had two lines and little wiggle room for injuries or penalties.

“Everyone had to step to the plate,” the coach said.

They made team defence a hallmark and blue liners Chloe Marshall and Young were able to generate plays by moving the puck. Offensively, the Panthers had to rely on a limited number of scorers to get goals. They managed, and with a majority of players in Grades 10-11, there should be a good core returning to challenge next season.

“There’s a lot of younger girls and they’re going to have some time to develop more,” Jackson said. “We’ll see where they go in the next few years. Hopefully, they can snipe that medal we weren’t able to get.”

The Panthers still had one more hockey experience to go, however. With their top-four finish, they qualified for AAA COSSA competition in Peterborough Monday. They were to face the high-flying St. Peter Saints at 10 a.m.