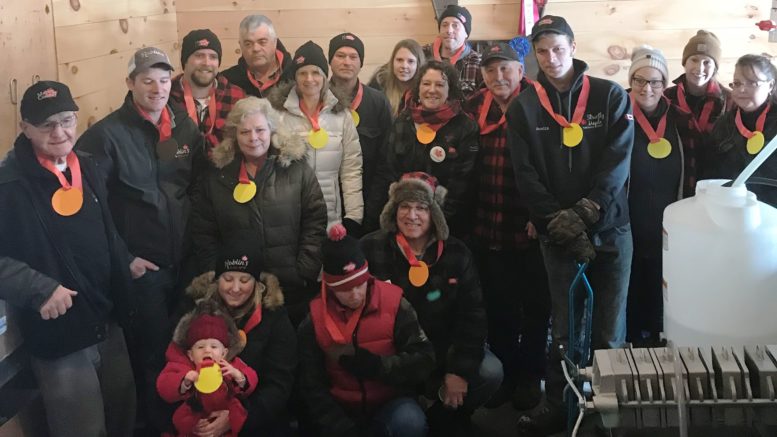 Producers from across the county gathered at Roblin Maple Syrup last week to announce the 17th annual Maple in the County. (Submitted photo)

Whether it’s golden, amber or dark, the treat will taste just as sweet this year as Maple in the County gets underway this month with a new grading system for maple syrup.

Visitors will be able to get a look at the new maple grading system adopted by producers during the March 24–25 event. While the product will look the same, producers will be assigning grades based on a new standardized grading system.

In the past, maple syrup has been graded in five shades, progressing from extra light to dark. Under the new system, the product will be classified as either golden, amber, dark or very dark. The grades are determined at bottling using a colour comparison chart.

A Maple in the County kick-off event was held at Roblin’s Maple Syrup on March 2. Maple in the County planning committee chair and Hubbs Sugarbush owner Ron Hubbs said with the winter Olympics having just passed, the organizers are likening the new grades to gold, silver, and bronze medals. There just one difference: The winner is in the eye of the beholder.

One grade isn’t necessarily better than any other, it’s more of a matter of personal taste. The darker the colour, the more maple flavour there will be.

“I would say to the consumers, don’t worry quite so much about the colour of the syrup, but focus more on the flavour,” said Hubbs. “You’re still going to get the same quality, but we’re just grading a little bit different.”

For the first time ever, the system will be in place across North America.

“Whether you go to Prince Edward Island or Nova Scotia or Vermont or New York State, Ontario or Quebec — we’re all using the same system this year,” Hubbs said.

Presented with support from Sobeys and the County’s community development department, Maple in the County will feature 12 sugarbushes in its 17th year. The county-wide event will feature pancake breakfasts, maple taffy on snow, s’mores, and plenty of kids activities like face painting, petting zoos, and wagon rides. The maple theme also extends to local restaurants, wineries and breweries, with many venues offering special menus and pairings to highlight the syrup.

The Prince Edward Community Centre will be hosting free public skating on March 24 and 25 from 1:30–3 p.m. A free family movie sponsored by Whattams Funeral Home will play at The Regent Theatre in Picton on March 25 at 2 p.m.

The two-day maple showcase annually attracts between 10,000 and 15,000 visitors and is considered an unofficial start to the county’s tourism season.

“This really is the kick-off to the season in the county,” said Rob Peck of Sugarbush Vineyards. “We always refer to this as the first harvest of the season and, as I understand it, this is the largest yearly event in the county.”

“Every operation offers a little bit of their own unique spin and charm to the Maple in the County weekend,” Peck said.

A full list of activities and events is available online at www.mapleinthecounty.ca and a map of participating locations is available throughout the county and in local newspapers.