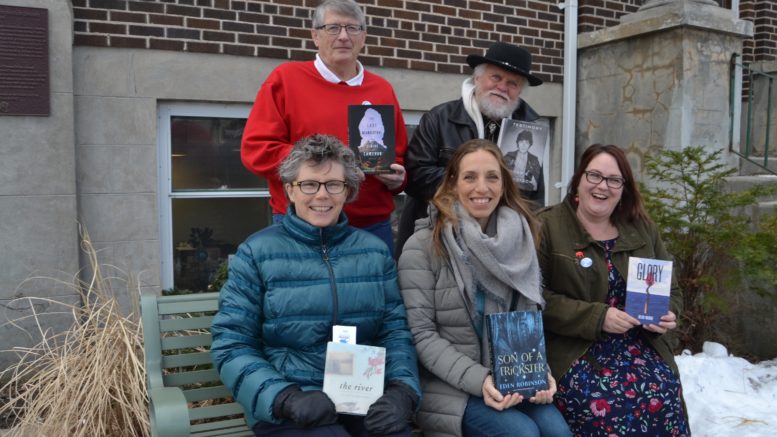 A fresh slate of champions and five new books to discuss were rolled out at the Wellington Branch of the Prince Edward County Library as the 2018 County Reads contest was launched Tuesday.

A local take on the CBC’s Canada Reads programme, five local luminaries and their literary selections will be presented to the public on April 19 at Waring Hall where the presenters will have five minutes to sway prospective voters and convince the audience why their choice should be the 2018 County Reads selection.

Local readers Conrad Beaubien, Krista Dalby, Ray Hobson, Sarah Selecky and Shelagh Mathers have made their selections and will be ready to defend their choice to the last breath at 2018 County Reads.

A local columnist, Beaubien has selected Robbie Robertson’s Testimony– an autobiography penned by the Canadian music icon over the span of five years.

“It’s multiple strands,” Beaubien said at Tuesday’s reveal. “Testimony is about the evolution of music and our society.”

Published locally by Invisible Publishing, the selection was described by Dalby as a story about “three fascinating women that are not having an easy time of things.”

Local author and online teacher Sarah Selecky has selected Son of a Trickster by Eden Robinson.

Short-listed for the Giller prize in 2017, Selecky believes the blend of humour and heartbreak was previously robbed of a literary laurel and laughingly counters that winning County Reads will atone for the oversight.

Hobson will dive into Claire Cameron’s The Last Neanderthal and is quite sure the choice will ring with County Reads attendees.

“In presenting the book to the reader, Cameron has introduced a limited vocabulary the neanderthal’s used amongst themselves and that really fascinated me,” Hobson explained. “This book is only a year old and I’m pretty sure it’s going to win.”

Mathers is a local lawyer and was tightlipped about Helen Humphreys’ The River, an examination of place at the author’s homestead on the nearby Napanee river.

The book examines the seasons and intertwines fiction and non-fiction, natural history and pictures and maps to tell the full story.

The annual event which typically draws over 200 people is undergoing some modifications in 2018 when compared to previous editions.

The new County Reads Junior program is a partnership with Saint Gregory Catholic School where one male and one female student from grade seven and eight recorded a short video defending a Canadian title they feel strongly about.

The videos were unveiled Tuesday and voting will happen online at facebook.com/peclibrary until April 18th with the winner’s video shown at intermission at the County Reads event.

This year, County Reads will also be the kickoff for a series of events called ‘The County Reads More’ which takes the place of the former Prince Edward County Authors festival.

The series will bring acclaimed authors to the county and the Friday evening and Saturday afternoon events will support the Picton Library expansion project.

The first event in this series will bring an icon of Canadian literature to the County as Le Cercle Français de Milford presents the first annual ‘Dorothy Spiers-Vincent Rendez-Vous’
where Roch Carrier will read from and discuss his most recent book Demain Matin, J’ai Écris Un Roman on Friday, April 20th at the Picton Town Hall at 3 p.m.

This bilingual presentation will appeal to both English and French Speakers.

Other authors slated to be included in ‘The County Reads More’ are David Frum, Charlotte Gray, Rosemary Sullivan and the Al Purdy A-Frame writer in residence Tim Faulkner among others.