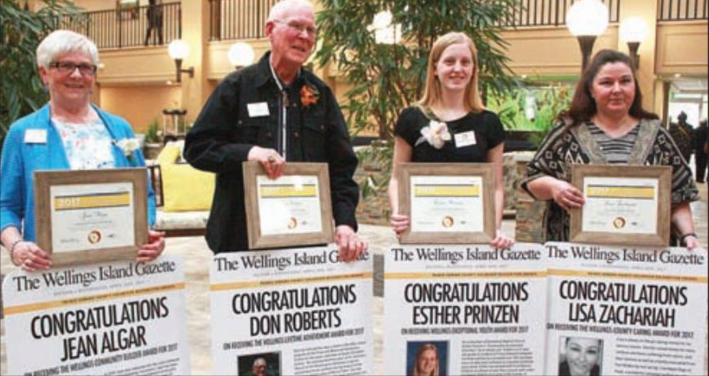 The Wellings of Picton is looking for some volunteers who have made an impact in the county.

“Daily, we see dozens of volunteers working tirelessly within our communities, and our residents have either spent countless hours of their lives in a volunteer role, or continue to do so. It’s not only part of the fabric of this industry, but the fabric of Canadian seniors as well — 42 per cent of the volunteer workforce is in the 55-plus category,” Henry said. “Prince Edward County is a shining example of that selfless commitment where thousands of volunteer hours are spent on countless worthy projects. We want to recognize and celebrate all volunteers during National Volunteer Week.”

To that end, the Wellings is asking members of the community to put forward the name of volunteers who have made a difference. Once again this year, Henry said there will be four categories.

Last year’s winners Algar, Zachariah, and Roberts have volunteered their time to judge.

Continuing with tradition, the winner in each category will be awarded $1,000 to the charity or not-for-profit cause of his or her choice.  Printcraft, SK Bailey Marketing and Design, and the Gazette are sponsoring the event alongside the Wellings.

Nomination forms are available at the Wellings of Picton at 15 Wellings Drive and the Gazette office at 267 Main Street. They’re also available online at www.wellingsofpicton.com. The submission deadline is March 16.

Those interested in joining in the celebration April 18 can purchase luncheon tickets for $25 each by contacting Henry at 613-707-6552.