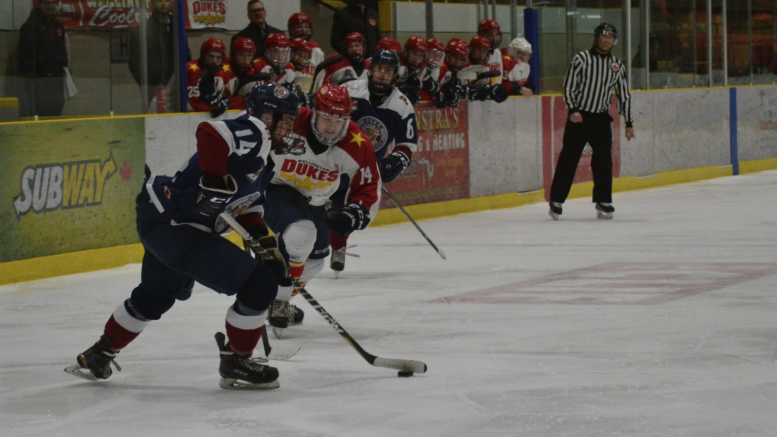 The Pickering Panthers and the Wellington Dukes are going to the limit.

With a chance to clinch the series in Pickering Sunday night, Wellington fell in overtime in Game 6 to the Cats 5-4 setting up a winner-take-all Game 7 at Essroc Arena Tuesday night.

If the second-seeded Dukes are to thwart the upstart seventh seeded Panthers and punch their ticket to the second round of the Buckland Cup playoffs, they will have to do it without their leading scorer and their No. 1 netminder.

Dukes forward Mitch Martan has been lost to the club since he speared a Pickering Panther on the way to the penalty box late in Game 3.

With under a minute to go in Game 5 and Wellington clinging to a one- goal lead, netminder Jonah Capriotti boiled over and started swinging his blocking glove at Panther Andrew Poulias after a collision in the Dukes crease.

Capriotti was assessed a match penalty attempt to injure misconduct and handed a four-game suspension.

This Wellington Dukes team never seems to take the easy route does it?

With Wellington up 4-2 in the late stages of the contest, Pickering bench boss David Demarinis pulled starter Ethan Langevin somewhat early and Wellington’s Mitch Mendonca was able to slip the puck into the yawning cage with just under three minutes to play and make it a three goal lead.

Normal top-seeded teams that don’t have to answer every face wash, shot after the whistle, and chirp probably would have let a frustrated Panthers defenceman Mitchell Doyle take a minor penalty after the Mendonca goal and finish off the game on the power play.

It would be Wellington taking the extra minor penalty and set up a wild finish that led to their starting netminder getting suspended.

Despite the power play, the game could have been sealed off in Wellington’s favour just 30 seconds later when Andrew Rinaldi opted to pass up a vacated Pickering net and a sure goal in favour of a cross ice feed to Teddy McGeen.

The puck was quickly intercepted as Pickering would march down the ice and score, Andrew Hughes putting one through Capriotti at 17:43 to make it 5-3.

Wellington would stave off Pickering until 34 seconds left when a scramble in front of the Wellington net lead to Dukes defenceman Geoff Lawson burying Poulias into Capriotti.

Jacob Roach would grab the loose puck and fire it over a prone Wellington netminder, leading to the boil over and suspension of Capriotti.

A Dukes fan that believes in action and consequence would harken back to Rinaldi’s decision not to put the puck into an ocean of net just a few minutes earlier to see how quickly a downward spiral can descend.

A Dukes fan that believes great Junior A hockey teams should maintain composure and discipline especially when winning by three goals with under three minutes would point to Ben Evans and Colin Doyle taking minors after Doyle blew his stack after the Mendonca empty-netter would say Wellington might have lost a war while winning a battle.

Wellington would hold on to take Game 5 but the die was already cast for Game 6 as the Dukes- win or lose-would finish the series with backup goaltender Tyler Richardson.

On Sunday in Pickering, Wellington gave up the game’s first goal and that was an ominous sign as the team scoring first in this series has not only won every contest but has never trailed in a game.

However, Wellington was able to buck one trend as Jackson Arcan tied the contest in the final minute of the frame and Mendonca was able to push the Dukes ahead at 1:36 of the second stanza.

The Dukes played most of the second up a goal but Pickering defenceman Dustyn McFaul would provide an equalizer with under three minutes to play in the second to make it 3-3.

After being outshot heavily in the first two periods, the Dukes would blast away on Langevin, firing 21 volleys the rookie’s way in the last period.

Wellington held most of the play through overtime as well but a bad line change by the Dukes lead to a two-on-one rush that Poulias would wind up capitalizing on at 11:52 of the extra frame.

Richardson made 38 saves in picking up his second overtime loss of the series after he was also victimized in overtime in Game Four.

Puck drop for Game 7 will be 8 p.m. Tuesday night as the 2017-2018 East Division regular season champions try to keep the Pickering Panthers from winning their first playoff series in a decade.