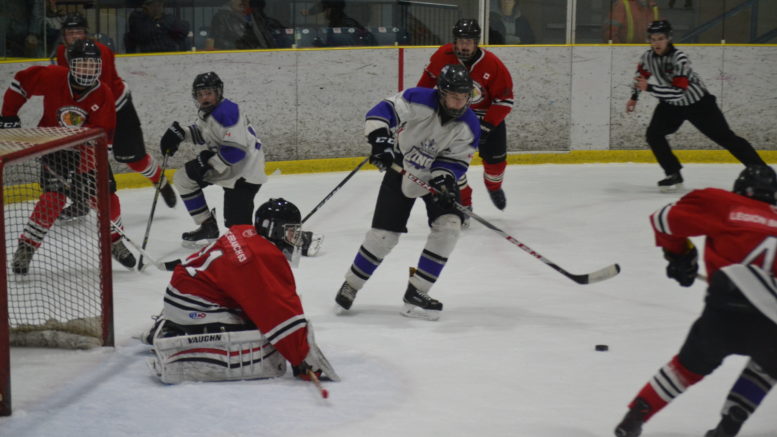 Turning points in an athletic contest aren’t always recognized when they happen.

For some, post-game dissection is required to identify when a game might have hinged and swung in the opposite direction. For the Lehigh Cement Group Bantam BB Kings in Game 6 of their Ontario Minor Hockey Association Semi-Final series, that moment was relatively easy to identify Monday night by all viewers.

In front of a supportive crowd of over 500 local fans at Essroc Arena, the Kings did battle with the visiting Collingwood Blackhawks for the right to play the Dorchester Dragons in the All Ontario Finals.

It was a perfect start for the locals as they came out of the gate with quick legs and puck smarts.

The Kings fed off the home crowd, keeping the Hawks penned in their zone for good stretches of time until the locals finally took a 1-0 lead late in the first period on a delayed Collingwood penalty.

Kings winger Kacey Cocklin made a nice feed to the point where Cole Lavender was able to rip one of his patented slap shots.

Austin Bryans was able to collect a rebound and move the puck to Hayden Legere who slipped it through Collingwood netminder Aidan Hull for the game’s first lead.

The Kings continued to press early into the second frame and were awarded a lengthy 5-on-3 opportunity.

Pressing the attack, Aa Kings forward found himself alone in front of the Collingwood net and was able to deke Hull, getting the netminder moving to the far post.

With an ocean of net to find, the puck seemed destined to find a home in the back of the cage only to see Hull make a desperation swipe with a trapper and snare a sure goal off the line.

It says here there couldn’t have been five nicer saves in OMHA play this season-at the bantam level or any other.

The Hull heroics spurred his Collingwood club on and the sequence was undeniably that aforementioned turning point.

Collingwood’s best skater Jaeden French would take advantage of some sloppy play in the Kings end and beat Kings net minder Nolan Lane to tie the game at the 10:28 mark and it was clear to anyone watching the Hull save had gone straight to the Blackhawks legs.

Just under five minutes later, Ethan Grainger would feed Dylan Fish after a prolonged sequence in the Kings end to give the Blackhawks a 2-1 lead they would carry to intermission.

The Kings would have a few nice opportunities in the third that kept Hull busy but were never able to replicate the sustained offensive zone pressure they started the game with- less a few promising forays the Collingwood netminder had to be rock steady on.

French would seal the game and the series with an empty netter with 14 seconds left to make it a 3-1 final in favour of the visitors. For the Bantam Kings, the Prince Edward County Minor Hockey Association club that went farthest into the 2018 playdowns, it was a season of growth and development and head coach Mike Pero lauded his club for making great strides this season to play and compete with the best BB centres in the province.

“This group came a long way from the beginning of the season. From where we started and what we encountered from the early part of the season and how they rose up to meet the challenges of play-down hockey from a physical and compete standpoint…They can keep their chins up nice and high and the pride they should have in their effort is something they will always remember,”Pero told the Gazette Tuesday.

With the series having gone to a rare Game 6 with the teams tied at five points a piece, it was clear that there wasn’t much to pick from between the two squads.

From this observer’s standpoint, Collingwood’s slight edge in top-end skill from the likes of French and Matt and Jack Larmer (who were coached by their father, former NHLer Jeff Larmer) were countered by the Kings’ overall will to win and the dedication by the entire team to play a structured game in all three zones.

Even in a highly entertaining Game 4 when the Blackhawks tried to exact a physical toll on the locals, the Kings met the challenge head on, answered the bell and took the contest 1-0.

“It was an entertaining series and the players played their hearts out. The goalies on both sides were outstanding. We brought this group from tryouts to the deciding game of the OMHA semi finals and I’m very proud of the way we were able grow and develop and answer the challenges along the way,” Pero added.

The coach also made mention of the supportive Kings fans that appeared en masse Monday night to help rally the local squad.

“We are extremely appreciative for the support from the community and having that great crowd cheering them on is something we will never forget. I can’t say enough about the Prince Edward County Minor Hockey Association, the fans and this parent group for all the support,” Pero added.