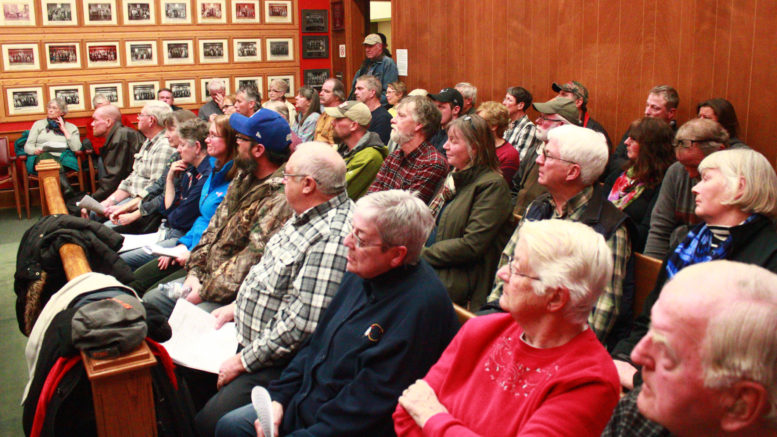 A large crowd looked on as council discussed the issue at Shire Hall on Tuesday. (Chad Ibbotson/Gazette staff)

Council has voted against a reduction to the farm tax ratio, but will form an ad hoc committee with a focus on support for vulnerable farmers.

A packed Shire Hall chamber looked on as council approved the motion setting the 2018 ratio at 25 per cent in a recorded vote of 9-6 with councillors Lenny Epstein, Jamie Forrester, David Harrison, Treat Hull, Janice Maynard, and Brad Nieman voting in opposition.

The motion also calls for an ad hoc committee to be created for the purpose of providing financial assistance to young and new farmers who have been negatively impacted by rising Municipal Property Assessment Corporation (MPAC) values for farmland.

Those who supported the motion said it was a difficult decision.

Councillor Kevin Gale said the discussion was likely one of the most polarizing topics this council has had to deal with. He said he respects that farmers have many hardships, but he couldn’t support putting this one on people who aren’t responsible for it.

“At the end of the day, I can’t shift the tax to another tax group simply because this group’s property went up in value — it’s wrong,” he said.

However, he said he did hear clearly that there are young farmers who do need help. He suggested the ad hoc committee could help address their concerns.

Mayor Robert Quaiff agreed the reduction shouldn’t come at the expense of another tax base.

“It doesn’t matter how you look at it, I’m not convinced that it’s not a tax shift,” he said.

He said there are few other municipalities in eastern Ontario who are considering a reduction in the farm tax ratio.

Quaiff said the motion establishes an ad hoc committee that can help address some of the concerns for young and new farmers. He noted that other such committees established to address development and water and wastewater concerns have been effective in this term of council.

“I want to help them and I want to know how we can do it this year,” he said. “I won’t settle for anything less than a stringent set of terms of reference that address this in a manner that looks after that vulnerability.”

There were councillors who continued to feel a reduction should be made.

Harrison said he could see the value of the ad hoc committee, but said he couldn’t support leaving the ratio at 25 per cent.

“The 20 per cent is basically the minimum amount that they asked for,” he said. “This equates to a 70 per cent increase in their tax bills over this MPAC cycle.”

Maynard said she couldn’t support the motion considering references to the importance of agriculture in many of council’s guiding documents.

“Whether you agree or disagree on who’s paying more or less taxes, how much or at what rate, this [reduction], to me, is a gesture to the farming community to tell them how much we appreciate them,” she said.

She didn’t feel the committee could do much to address concerns.

“I don’t think the ad-hoc committee will shed much light onto this subject,” she said.

Again local farmers had a strong presence at the meeting and they asked for council to lessen the blow of escalating farmland values which rose by an average of 110 per cent in Prince Edward County.

Elizabeth Johnston said the increased assessments mean less money in the pockets of young families who are trying to establish farms. A full-time farmer in the county, Johnston said her assessment rose 150 per cent. She appealed to MPAC, but was unsuccessful.

“This increase alone — after a good year of farming with no drought, no excess rain, good hay and, of course, a lot of luck — represents eight to 10 per cent of my income,” she said.

Johnston questioned whether any tax class should be facing increases of over 100 per cent in any assessment period. She fears more increases are on the way when new assessments are issued in 2020.

“It’s very difficult continuing to work as hard as I do, investing so much money and time in Prince Edward County, if I’m looking at another 10-per-cent reduction in my earnings in just two years,” she said.

Terms of reference for the new ad hoc committee are anticipated to come forward by the end of April.

Chief administrative officer James Hepburn said staff would seek to ensure the terms of reference for the new committee would address the concerns.