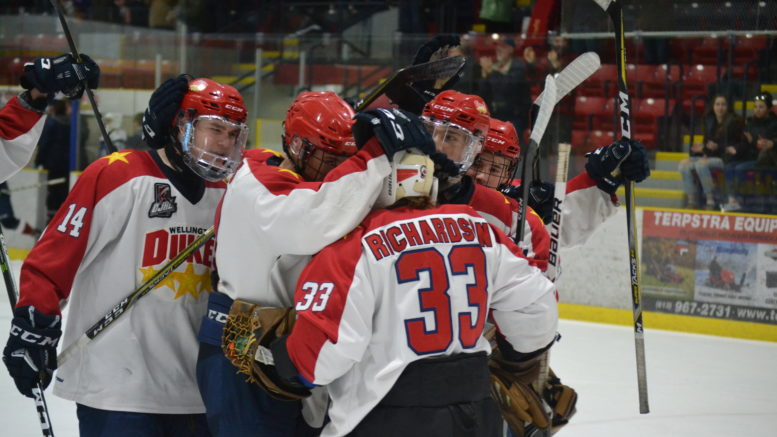 THE MARCH MOVES ON- Wellington Dukes players mob goaltender Tyler Richardson after he made 16 saves and picked up his first win of the post season Tuesday night. Wellington punched their ticket to the second round of the 2018 Buckland Cup playoffs with a 6-2 win over Pickering. (Jason Parks/Gazette Staff)

In a winner-take-all scenario in the Ontario Junior Hockey League Northeast Conference Quarterfinal series between the Pickering Panthers and the local Jr. A outfit, it was Wellington coming out on top 6-2 in the deciding game Monday night.

The Dukes scored early and often and minus a push back in the opening 10 minutes of the second period, never looked in grave danger of not advancing to the second round of the 2018 Buckland Cup playoffs.

The team dealt with both injury and suspensions in the first round and, combined with a plucky Pickering bunch led by their 16-year-old netminder Ethan Langevin, this was as predicted by several pundits-a scary series for the Wellington Dukes.

In need of its best opening of the series, Dukes bench boss John Druce said it was the team’s captain who played a vital role in ensuring the club got off to the best start possible.

“One of the biggest things tonight was right before we were ready to go out for the first period, our captain Colin Doyle rose and said this is where we have to have our best start of the season,” Druce told the Gazette after the win Monday night. “Having a guy like Colin Doyle in the dressing room and addressing his team in the way he did made a difference in the start of this game.”

Just 2:43 into the pressure-packed contest, it was Teddy McGeen and Andrew Rinaldi making a couple of smart passes in the corner before McGeen found Jackson Arcan at the side of the net.

Arcan slipped the puck between Langevin for the key first goal of the game.

Throughout the series, the club who scored the opening goal of any contest won that game.

Wellington hemmed Pickering in their own end for long stretches in the first but wouldn’t double the lead until the final minute of the stanza when Dawson Ellis picked off an Anthony Azzano pass at the Panthers blueline and beat Langevin on the ice to make it 2-0.

In the second, Pickering pushed back and it was Andrew Hughes setting up Andrew Poulias who was able to march in alone and bank a nice shot off the post and past Tyler Richardson just 53 seconds in.

If there was an uh-oh moment for the Wellington Dukes in Game 7, this was it. But Richardson, filling in for the suspended Jonah Capriotti, was solid the rest of the frame, stopping any and all Pickering volleys.

“That’s the reason we brought Richardson in, just in case anything happened to Capriotti,” Druce said of the veteran OJHL netminder. “He came to play hard today.”

After being under fire early in the period, Wellington slowly started to turn the tide.

Late in the second, it was Arcan getting his second of the contest from behind the goal line as he out skated Panthers defenceman Kevin Porter to a loose puck and just threw it on net.

Less than two minutes later, Rinaldi was able to win a battle over Panthers defenceman Dustyn McFaul and walk to the Pickering net, eventually corralling his own rebound and beating Langevin to make it 4-1 Wellington.

The Dukes would again give up an early goal to the Panthers as Hughes was able to lift a puck over Richardson’s shoulder on a nice individual effort but Wellington’s Ben Evans restored the home side’s three goal cushion about five minutes later.

After Graeme McCrory led a nice rush into the Pickering end, he was able to fed the puck back to the slot to Jeff Burridge, who in turn kicked the disc to a lurking Evans who beat Langevin low for Wellington’s fifth goal of the night.

As he has all series, Pickering bench boss David Demarinis lifted Langevin early in favour of the extra attacker and it Wellington Dukes call-up Issac Langdon getting his first of the series to seal it a 6-2.

The game did not end exactly as planned for Wellington however as Noah Lugli took his second head checking penalty of the playoffs and will be suspended for the first two games of the second round.

Game 7 is likely a contest Langevin would like to forget but Druce was quick to tip his cap to the Sarnia Sting commit and what he showed Wellington, especially in Games 3, 4, 5, and 6.

“That’s a great young man in that net and he’s got a bright future ahead of him. I think he was the biggest difference in this series and really came up big in those overtime games in their building. Doing that at 16-years of age shows what kind of skill and determination he has,” Druce said.

But Wellington was quickly looking ahead as they will host the Newmarket Hurricanes in the Northeast Conference semi-finals starting Friday night in Wellington.

The Canes was well instructed by bench boss Tom Milne and were one of the best OJHL clubs in the second half of the regular season thanks to sound positional play in all three zones of the rink.

In order to be successful, Druce knows what his club will have to do.

“We are going to have to match that structure and play as hard as they do, fight through checks and be patient in some situations. Newmarket is not going to give us anything,” Druce said.