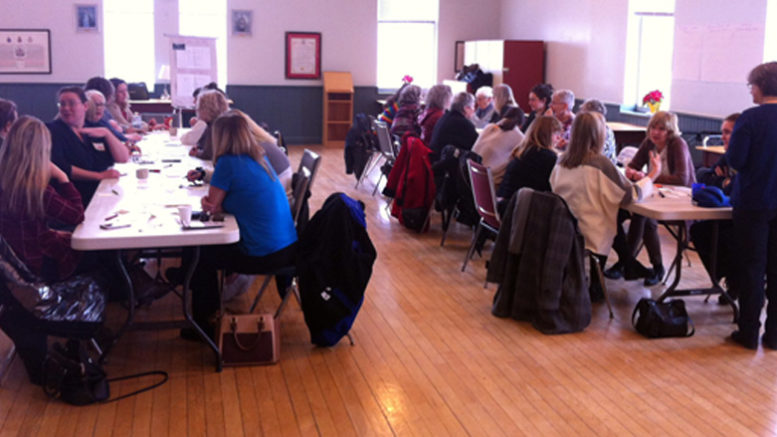 About 30 participants ponder ways they can press for progress

Handed the theme “Press for Progress” for International Women’s Day, March 8, about 30 local women started their push for change by working point by point.

They spent time collectively pondering how to make the world more inclusive for women and for all. Discussion flowed and after a couple hours the tables at the Picton Town Hall were littered with yellow sticky notes marked with ideas.

“It was a brainstorming idea,” said Christine Renaud, the outreach co-ordinator at Alternatives for Women. “The idea was to think of all the ways we might take action individually and collectively to make the theme actually happen.”

Renaud waded through hundreds of sticky notes and some large poster boards where those ideas were categorized.

Many of the themes revolved around education. The women suggested more be done in schools to recognize International Women’s Day, to change outdated perceptions about gender roles and equality, and to teach young men to respect women.

Other suggestions included changing curricula to recognize women in history and to offer more training for those involved in the legal system about violence against women and children. Promotion of female participation in male-dominated fields of study and work was also encouraged.

There was also a component, Renaud said, encouraging society to challenge women’s portrayals in the media and challenge existing power structures and hierarchy.

For one of the suggestions, Alternatives demonstrated it was ahead of the curve.

“One of them that we actually did — we provided child care,” she said. “Whether child care is needed or not, the idea is that child care at all public events should be provided so that women — and men, but it’s mostly women in charge of the family — have opportunity to take part in all civic engagement.

Renaud will take the ideas and organize them into a magazine that could be distributed to schools, libraries, 4-H clubs, and Girl Guide programs. It also may be taken to council and the school board in time.

As the idea behind International Women’s Day is to bring women’s issues to the fore year- round, not just one day in March, Renaud said several participants expressed interest in continuing the discussion more often.

“One of the positive outcomes was that people felt a need to do this more regularly — to get together with other women. Alternatives will be hosting these probably four times a year to six times a year. Some people wanted to do it monthly, so we’re trying to think of what we can do.”