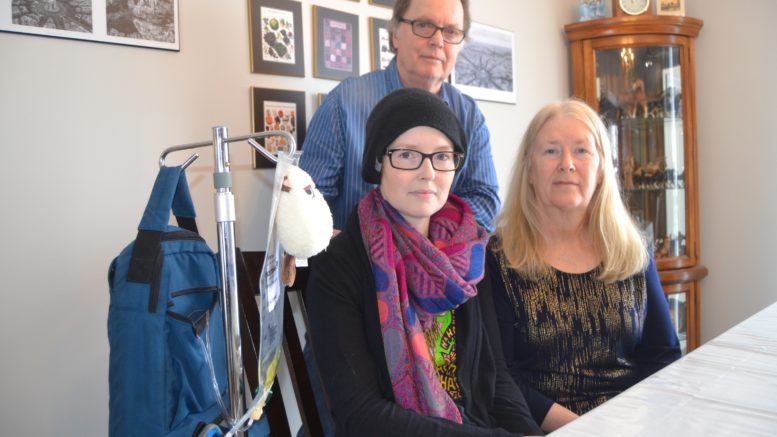 ANXIOUS TIMES- Andrea Taylor and her parents Keith and Valerie last month at their home outside of Picton.(Jason Parks/Gazette Staff)

Editorial Note: A previous version of this story was published prior to the announcement that the Taylor family had reached their fundraising goal. This updated version reflects the goal being reached on Saturday.

The surgery date is set and the goal has been reached.

Thanks to the Rotary Club of Picton and the Matt Stever fund and a crush of donations, a local Prince Edward County woman will be receiving her life-saving operation in the United States next month.

The Matt Stever fund is named in honour of a young Picton native that lost his life in tragic motor scooter accident a decade ago while he was teaching english as a second langue in Taiwan.

While laying critically injured in intensive care in a hospital overseas, this community rallied to raise money to bring Matt Stever back to Canada.

The former Picton Pirate and affable PECI alum would ultimately slip away due to his injuries but the funds raised by his friends and family were funnelled into a fund administered by the Rotary Club of Picton for families that are going through hardships due to child’s injury and disease.

The Taylor family have been trying to $175,000 to cover the cost of Andrea’s gut rehabilitation procedure that’s only available in Cleveland and involves repairing and realignment of the organs in the abdominal cavity.

“The Rotary Club of Picton feels very strongly about their position as a service organization and what better service than to help Andrea and her parents overcome this significant hurdle and bringing Andrea back to health?” Janikowski wondered. “We thought this was a prefect case where we should step up and help a local family whose child is having significant medical issues”

The club had intended on issuing a challenge to the community and were going to match the first $7,000 that is donated to the Rotary Club and the Matt Stever Fund on Andrea’s behalf, meaning that $14,000 could be raised to cover the cost of the eight operation and six week recovery period in the Cleveland Hospital.

But happy news flooded inboxes this weekend as fundraising efforts and the $7,000 pledge had helped eclipsed the total estimated costs of the surgery and thus eliminated the need for a challenge through the local Rotary club.

In total, $5,000 came from the Stever fund while $2,000 came through fundraising efforts between members of  the Rotary Club of Picton and the Wellington Rotary Club.

It hardly seems possible that it just over ten years ago when the Stever family received word there had been a terrible accident involving son Matt.

Mary Stever harkened back to that time when she and Roger flew to Taiwan not knowing what was waiting for them in a small hospital room on the other side of the Pacific Ocean.

“We were so overwhelmed and we really experienced the heart of this community at a very stressful time and because of that, we want to help and give back,” Mary Stever explained.
The fund has helped Prince Edward County families that have children that are undergoing significant medical issues and need treatment at hospitals in Kingston and Toronto and is designed to help defray some of the travel costs.

And while some local families have been able to take advantage of the fund to help them financially through tragic circumstances, the profile of the Matt Stever Fund has dwindled slightly in recent years as more time passes after the accident.

“There’s a lot of people who don’t know about this fund, both families that would need it and people who would contribute even a little bit to it and every bit helps,” Mary Stever added. “The Rotary Club of Picton are working to make it streamlined to donate and to apply and receive help. We really hope more families will be reached.”

A little over a month ago, the Keith and Valerie Taylor were considering selling their home and most if not all their possessions to save their daughter’s life due to a rare condition that has reduced her health to the point of being fed intravenously.

In a little over four weeks, this community has rallied to the point of raising nearly the money needed for the operation and relieved the Taylor’s of the question of whether they would be able to raise the money in time to save Andrea’s life.

It was a similar scenario in 2007 when the Stevers were lifted up by friends, family members and often strangers that heard about this heartbreaking scenario and wanted to help bring Matt home.

It was a shining example of this Loyalist community at its best and Latchford said it’s alway been that way in Prince Edward County-no matter what era was marked by the calendar.

“In the late 1700’s there was a severe drought when the newly established Loyalist homesteads were getting started and it was so bad it killed the trees.There are stories of families passing a beef bone from one home to another to make soup so they could survive the winter,” Latchford explained. “We’ve got a history of caring for one another here and small rural communities need to do that. You see the way this community has rallied to support Andrea and the Taylor’s, that spirit and cooperation that we’ve been raised with rings true even today.”

Keith and Valerie shared stories of supportive businesses and individuals who have stepped forward to help out.

From PECI student Mackenzie Kingma selling bags of popcorn to her classmates to the Quinte Mohawk School organizing a taco night and bake sale, there are hundreds of instances of local people helping in which ever way the can to help the Taylor family reach their goal.

“We are so lucky to live in this community and we are reminded of it everyday. If we lived in a city, this might not have happened,” Keith Taylor said. “In this crisis, we have connected and reconnected with so many people.”

“For so long, we’ve been so stressed and angry at the situation but now, in the last month, it’s like a warm blanket has been pulled around us,” Valerie added.

The Stevers know that feeling well and Roger recalled meeting young people-both from Prince Edward County and from worlds away- that were touched by their son in his short but magnetic lifetime.

“I remember at the time being introduced to so many people that would say ‘I’m good friends with Matt’ and he had such a great sense of community and that’s why these kids really came through ten years ago and did everything they could to support us. We know that this is the type of cause Matt would have believed in and would’ve so wanted to be a part of and that’s why Mary and I really support this,” Roger Stever added.

For more information or to donate to the Matt Stever Fund and support Andrea Taylor, please visit https://portal.clubrunner.ca/1145/SitePage/matt-stever-fund.