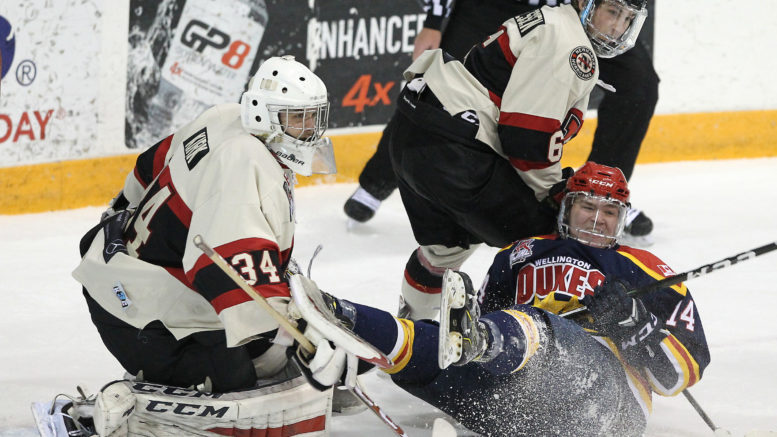 TAKE A SEAT- Wellington Duke Ben Evans drives to the Newmarket net during the first period of Game 3 of the OJHL Northeast Conference Semi Finals as Hurricanes (From left) Fraser Kirk and Cole Thiessen attempt to stop his progress. Newmarket won the contest 8-1and have a 2-0 lead in the series. (Photo by Tim Bates / OJHL Images)

The bad news for Wellington Dukes fans is the home town club has been blown away by the Newmarket Hurricanes through the first two games of the 2018 Ontario Junior Hockey League’s Northeast Conference semi-finals.

The better news for fans of the local Jr. A team is that the club should, barring a rogue lightening bolt shooting of the sky and striking the doors to Essroc Arena, play Game 3 of the seven game set Tuesday night with a full lineup- the first time since Game 3 of the opening round series against Pickering.

That last paragraph might be written in jest but, given the way Wellington Dukes have landed on the OJHL’s naughty list this post season, you can’t blame the club for feeling like they might have dropped a mirror while walking under a ladder as a black cat crossed their path.

Wellington starting netminder Jonah Capriotti will draw back into the crease Tuesday after his four game suspension and hulking defenceman Noah Lugli will also likely be back patrolling the Dukes blueline after being ousted to the stands for Games 1 and 2 of this second round series due to a check-to-the-head penalty late in Game 7 of the previous round.

And those players could certainly be utilized moving forward however it will take more than bodies to turn the tide for the Wellington side in Game 3. GOING ALL OUT- Wellington net minder Tyler Richardson sprawls to make a save during Game 3 of the 2018 OJHL Northeast Conference Semi-Finals between the Dukes and the Newmarket Hurricanes. (Photo by Tim Bates/OJHL Images)

The Hurricanes, almost for the drop of the puck in Game 1, have turned the series into a battle of wills.

Credit Tom Milne’s club for staying patient, consistently being on the right side of the puck in all three zones and waiting for Wellington to lose focus and offer up a scoring opportunity.

In Game 1, that chance presented itself in the first when Dukes netminder Tyler Richardson got a little overzealous in playing the puck near the blueline.

With Richardson well out of the net, Matt Goeree would score the series’ opening goal just over six minutes in.

To be fair, the Dukes had some decent forays into the Newmarket zone in the second period but Fraser Kirk was there every time to smother all eight Wellington volleys.

Late in the frame, Wellington’s Mitch Martan bumped Kirk while driving to the net, picking up a goaltender interference minor.

In the back half of the powerplay at the start of the third stanza, Newmarket capitalized on a break as pesky Newmarket forward Alex Ierullo’s shot banked off Geoff Lawson and straight to Cole Thiessen at the point.

With players looking one way and the puck going another, Thiessen was able to rip the puck past Richardson just 53 seconds in the third to double the Hurricane lead at 2-0.

Wellington again had a few moments where they verged on the cusp of getting back into the hockey game but the teeth of the Newmarket trap and the netminding of Kirk kept the volume low on a Dukes comeback bid.

The Canes wound up adding an empty-netter to make it a 3-0 final.

On Sunday in Newmarket, Wellington was in the game in the first period but really never matched the hosts less an early game tying goal off the stick of Declan Carlile at the 5:08 mark of the opening period.

The Canes found the net early and often in an 8-1 blowout.

In addition to getting Capriotti and Lugli back into the lineup, some interesting options might provide some lineup wrinkles for Dukes head coach John Druce should they become available by Tuesday night.

A point-producing centreman, Pucci had nearly two points per game for the Canucks this season while Barbeau had 47 points in 50 Jr. B games.

The Canucks face elimination at the hands of the Caledonia Pro-Fit Corvairs tonight in the Sutherland Cup playoffs although its unclear whether they would be available in time for Game 3 and if Druce would consider dropping new players into the Wellington lineup on the day of a playoff game.

Round The ‘Roc: Carlile and Zach Uens were named to the OJHL’s Top Prospect second team earlier this month. The teams are comprised of 2000 and 2001 birth-year prospects and is selected by the OJHL general managers, as well as an awards committee comprised of one media member in each OJHL market…Vice-President of Hockey Operations Randy Uens held a town hall meeting for the public prior to Game 1 and provided an update on a number of fronts while also listening to concerns from fans. Among the many topics discussed, Uens said the ownership group was exploring the possibility of purchasing the Picton Pirates Provincial Junior Hockey League team and operating it as a farm club for the Jr. A outfit. Uens also said the club would be focussing on attracting players that were looking at going the NCAA route as opposed to Major Junior prospects and the organization would likely host an off-season prospects camp in the Detroit area later this year.