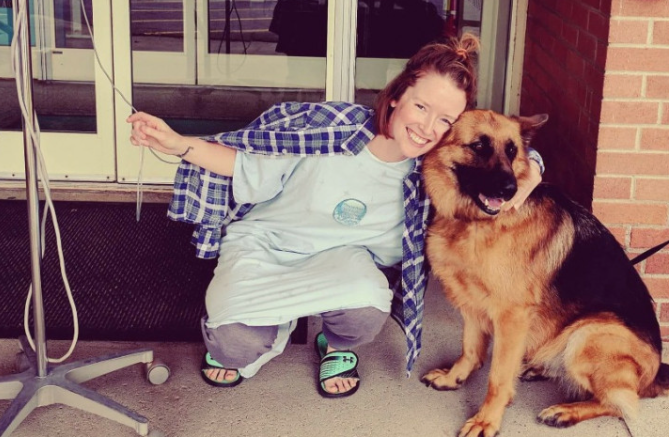 WITH A HEARTY THANKS- Picton's Andrea Taylor is thankful after the community raised $175,000 in a little over a month to cover the cost of her life-saving surgery in Cleveland April 4th. (Submitted Photo)

The following is a letter issued by Prince Edward County native Andrea Taylor to the Gazette Monday. This weekend, the Taylor family announced that fundraising efforts to raise the $175,000 for Andrea’s life-saving surgery in Cleveland had succeeded.

A few months ago, my intestinal malrotation journey seemed to be a never-ending and daunting fight. Never in a million years did I think I would have to brainstorm with my family about how we would pay for a surgery. This was a concept totally foreign to me as a Canadian.

Desperate, we made the decision to go public with my health situation. Immediately, people began to rally around us and the support came flying in. I can’t even begin to describe the stress this has taken off our family.

We travelled to Cleveland at the end of February for pre-op appointments. I met with two other members of the surgical team. It is an incredible feeling meeting with an expert in your rare condition. It’s almost like meeting someone who speaks your own language in a world where most won’t even acknowledge it.

With all the community support, my spirits are incredibly high. Knowing how many people I have in my corner really helps. I still struggle with my physical health on a regular basis so I am anxiously awaiting my surgery date that will be at the beginning of April.

Last week, we surpassed our goal on the GoFundMe page. The support has really been overwhelming. The span of places the campaign has reached is amazing – Alberta, British Columbia, the Northwest Territories, the United States, Japan, Peru, Belgium, Switzerland and Denmark.

To the community members, families, business owners, churches, clubs and organizations from Prince Edward County, Tyendinaga Mohawk Territory and Belleville- Thank you so much for your support, donations, shares, and displaying posters. I feel so proud to call this area home.

We are so thrilled with how wildly successful the fundraisers have been. The music fundraiser at the Brittany Brant Music Centre led the way with a wonderful night with great music. The Taco Fundraiser/Silent Auction at Quinte Mohawk School was another wonderful evening – it is always special for my mom when she gets to connect with former students and their families. Ian Sorbie and Michel Berube held a fundraising dinner catered by their Il Fornello restaurants in Toronto. Both my mom and my partner Chris had a lot of fun that evening and the food was excellent. Chris and Nora Rodgers hosted a fundraiser at the Waring House. Thank you so much Chris, Nora, Mark Despault, Janet Marissen, John Whyte, Waring House staff and the Wellington Lions club for putting on such a great evening. Michael Hymus held a fundraiser at his Angry Bird’s restaurant that was a huge success. I still can’t believe the amount of chicken they sold.

I also wanted to say a huge thank you to every single person who came out to support these fundraising events – you made these fundraisers fun and successful!

A grade nine student at PECI, Mackenzie Kingma, contacted me asking if she could organize a popcorn fundraiser at her school. I was and still am so impressed with her maturity and initiative – we are very lucky to have youth like her in the County.

I really want to thank the agricultural communities in this area for their support as well. The horse community has held fundraisers at various barns. Harper Run Stables and Jump4Joy Training Centre held a Pony Ride/Bake sale and raffle. Riders and boarders at Owlstone Equestrian Centre held a Horse and Pet photo shoot. It means so much having the support of my fellow equestrians and motivates me to get back in the saddle.

The farming community in Prince Edward County has been amazingly supportive. From the local individual farms to the Prince Edward Cattlemens Association – we are so lucky to have you as friends and neighbours.

My focus right now is to try and stay as relaxed and healthy before surgery. I will make sure someone puts an update on our GoFundMe page with how the surgery went. As for my plans after, it will be a long road of recovery but I am so ready to get started on that portion of my journey.