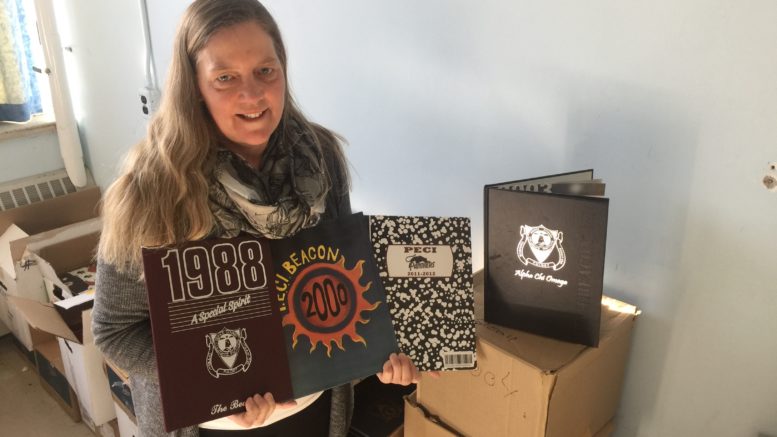 IT SHINES THROUGHOUT THE YEARS- PECI teacher Hilary Anne Clarke is hoping to sell older editions of the PECI Yearbook 'The Beacon' to alumni that may have lost or misplaced their copy. (Jason Parks/Gazette Staff)

But that flame will soon be extinguished.

The local secondary school is making room in order to transition to a Kindergarten to Grade 12 facility next fall and, as such, it’s time to do a little spring cleaning.

That includes stacks of yearbooks from days gone by that need a new home.

Co-Operative Education teacher and Beacon editor for the last 15 years Hilary-Anne Clarke explained the school has been holding on to a number of old Beacons, some dating back to 1972, and those are now available to some lucky Panther that might be missing an edition or two and want to remember those high school days.

The hair styles, the clothing, the trends and the Prince Edward County vernacular of the time are all captured in each edition.

“We’ve got a stockpile of yearbooks from previous years and, because space is at a premium come September in this school, it’s time to clear them out,” Clarke said. “We are selling them off individually or in bunches.”

As well, there are copies of a 25th anniversary book that celebrates PECI’s silver anniversary with a good cross section of historical photos and stories.

More recent years that have extra copies waiting to be sold to interested alumni include Beacons from 2002-2012.

All of these copies will be available to be purchased at the school Thursday evening when PECI hosts it’s second semester meet-the-teacher night starting at 6:30 p.m.

When asked how the school comes into possession of extra yearbooks, Clarke explained that while there are pre-orders made, the school would typically order some extras for students that neglected to commit to buying a copy.

In other cases, students moved on, graduated and never returned to pick up their book of memories.

“If those people are on the list or have a receipt, they can certainly touch base and come back and pick them up without any additional costs,” Clarke added.

At one time, the Beacon was a must-have item amongst PECI Panthers whose student population was typically over 1,000 annualy

Now, in the digital age with social media and low enrolment, a hard copy yearbook isn’t as popular as it once was.

“We find it’s the adults and the parents that appreciate the yearbooks more than the students,” Clarke mused. “This generation, their lives are so full of photos they really don’t get in 10 years they won’t be able to find these photos anymore because their phone died or they were never saved. People are able to reconnect to those memories through a published hard copy.”

As the school transitions, Clarke is unsure what will happen with the Beacon next fall.

“This may be the last Beacon we do was a Secondary School under the PECI name…who really knows what the future holds and how to take it from here,” Clarke said.

As such, she and the Yearbook club are looking for submissions of past PECI alum that may have a funny anecdote, rare picture of a PECI happening or story of the school from years gone by.

To submit to the 2018 Beacon or to purchase a previous edition, contact Clarke at haclarke@hpedsb.on.ca.

The following is the master list of yearbooks available for purchase and price:

Package deals with the purchase of this year’s yearbook: