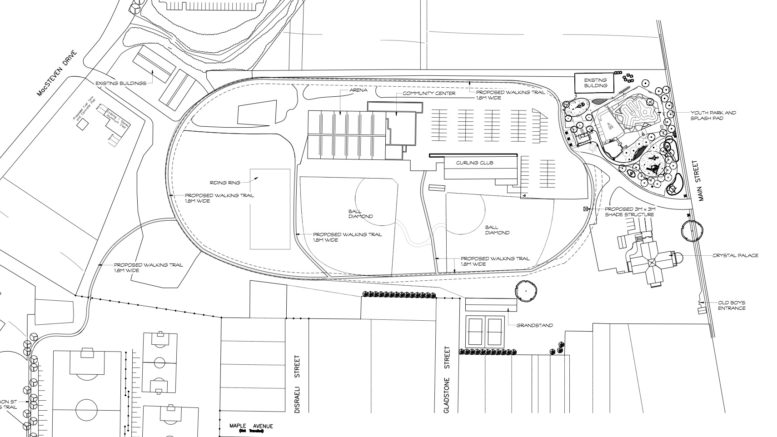 A rendering of the proposed walking track. (Submitted photo)

Councillors seemed receptive to the Picton recreation committee’s plans for a walking track around the Prince Edward Community Centre.

Recreation committee member Julie Miller presented the plan to councillors at last week’s committee-of-the-whole meeting. The proposal was referred to staff for a report.

The 1.8-metre-wide track would encircle the entire fairgrounds and is anticipated to have one-kilometre and 400-metre loops. An estimate pegged the cost of the project at about $70,000. Miller told councillors the recreation committee has committed $10,000 to the project while a local business has verbally offered a $50,000-donation.

The idea for the project arose out of Miller’s use of the Wellington walking track. She told councillors it was during one of those trips last year that she realized Picton may have a suitable space for something similar. She recalled the former horse race track at the Picton Fairgrounds and decided to check it out with an eye toward repurposing it.

“My first step was to walk the track and it quickly became clear why it isn’t used more — it’s muddy and rutted and there are huge trip hazards,” she said. “It’s quite unsafe, but clearly there is potential for it to be a great space to walk or run.”

While she noted that the Millennium Trail is currently receiving upgrades, she felt a dedicated walking trail would offer a safer environment for those looking to exercise.

“If you have headphones on and you have a Ski-Doo coming up behind you or a four-wheeler, it’s just scary,” she said. “I wanted something that had a better surface that was safer and easier to walk on.”

The positive impact of exercise is well-known, Miller said, and the County’s corporate strategic plan suggests the municipality should be promoting healthy and active living.

“Developing a walking track is a really great step toward this with the added benefit of fresh air,” she said.

Miller said it was important that one of the track’s loops be 400 metres.

“If we make it 400 metres that’s the industry standard for track and field activities,” she said. “When you think about how close it is to the high school, if we could make it so that it was a prescribed distance, there’s no reason we couldn’t have some kind of partnership.”

Miller has been working with local landscaper Scott Wentworth on plans for the track.

“Scott Wentworth stepped up as he often does in the community,” Miller said. “He had some fantastic ideas, he made suggestions regarding the surface, the compacting, and the grading of the track.”

With the right material and proper drainage, the track could be used almost year round.

“It’s a great idea and I know Relay for Life would have loved that,” he said.

Gale questioned whether the Picton Fair activities might have an impact on track.

Miller suggested that any damage caused to the track during the fair would be covered through a contingency fund that would be set up to cover ongoing maintenance.

“If it gets torn up a little bit, we’ll fix it — it’s part of the cost of doing business,” she said. “We’re not going to say to the fair ‘you can’t use that space.’”

She said the track would likely close during ticketed events like the fair.

Councillor Bill Roberts was also enthusiastic about the project.

“I’m especially interested because PECI doesn’t have a 400-metre track,” said Roberts. “This is great and I think you’re right on the money in terms of the outdoors and fresh air.”

Councillor Roy Pennell said the project makes sense considering how well-received the Wellington track has been.

Miller said if the project is approved, she’ll move to strike a new committee that would raise funds and oversee the project.