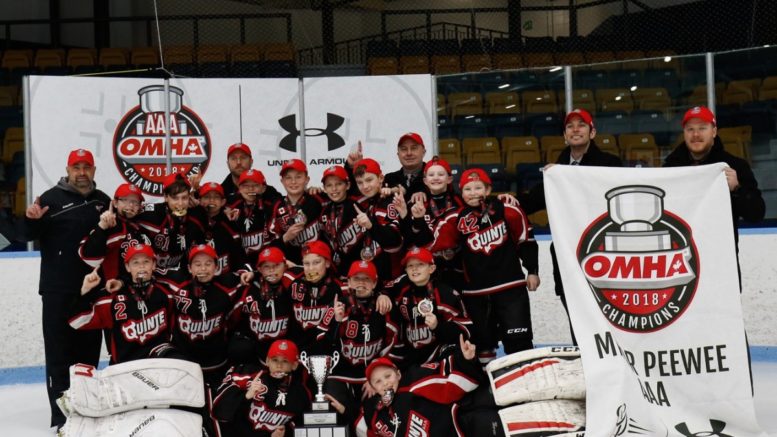 While the Prince Edward County Kings minor hockey teams fell just short of playing for Ontario Minor Hockey Association supremacy this spring, there are a couple of local players that are sporting the red caps that are emblematic of an All Ontario crown. Both forwards on the AAA squad, Philip scored the game’s opening goal and Partridge was on the ice and stationed in front of the Waxers net when Quinte would score late in overtime to take the All Ontario AAA title 3-2.

It was a matter of the Red Devils turning the tables on the Waxers who ousted the regional squad in the in the 2017 OMHA Major Atom final.

“The group got hungrier and set out some internal goals this season,” Quinte coach Matt Langdon told the Gazette. “We wanted to be tougher to play against and have that desire and determination. Everybody bought in and that was the key-they all wanted something so badly.”

Quinte compiled a 29-2-5 record to lead the Eastern AAA Hockey League’s East Division and went 3-1 in the round robin portion of last weekend’s tournament before avenging their only loss to the Waxers in the Gold Medal game.

Philip and Partridge are PECMHA grads that Langdon has coached as part of the Red Devil program for the last three seasons.

The bench boss said both players made positive impacts for the team- off and on the ice.

“They are both a pleasure to coach and are good character kids in our dressing room.

They made huge contributions to our success and are nice personalities to have on our team. They round us out very well.”

Philip earned player of the game twice this weekend in the Red Devils’ drive to an OMHA title.

“Liam was an MVP in one of the games and was selected as MVP in another game,” Langdon said.

The award, which was selected by tournament officials, came with an Under Armour gym bag.

“The second time he won, he gave the bag to a teammate and that was a really classy move on his part,” the coach added.

The team, comprised of 2006-birth-year players, will get to host the 2019 OMHA Major Pee Wee Finals in the Quinte area next spring.