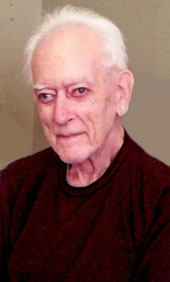 Ivan Eugene Baverstock
Died peacefully at Prince Edward County Memorial Hospital on Saturday March 17th, 2018. Ivan Baverstock, of Manor on Loyalist, formerly of Log Cabin Point, the Outlet, at the age of 93. Beloved husband of the late Ruth. He will be missed by his nieces and nephews and their families.  Remembered by his lifelong friend Murney Johnson and the gang at MLP. Ivan was quietly proud to serve his country with the Hastings and Prince Edward Regiment during WWII. He continued the family commercial fishing business that was first established in 1898 which is still operated by the Baverstock family today. Mr. Baverstock rested at the Hicks Funeral Home, 2 Centre Street, Picton, 613-476-5571.  Funeral Service was held in the chapel on Wednesday March 21st at 2 p.m. The Reverend Kevin Stenhouse officiated. Interment to follow at Cherry Valley Cemetery.  If desired, donations to the Prince Edward County Memorial Hospital Foundation would be appreciated by the family. The family received friends on Wednesday afternoon from 1 p.m. until service time. www.hicksfuneralhome.ca