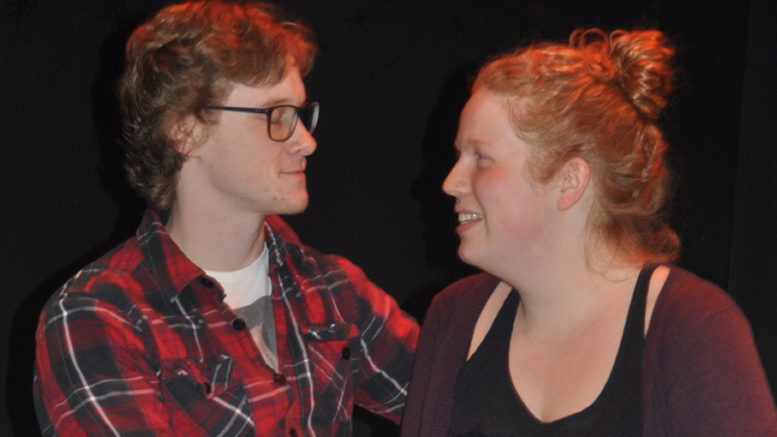 It has been said that for every single action, there is a reaction.

But how many people actually take the time to think about how every little minute decision affects the bigger picture?

This weekend, Shatterbox Theatre is urging audiences at the Regent Theatre to explore that thought with its debut production, Constellations. The acclaimed Nick Payne script introduces its audience to beekeeper Roland (Riley Blakely) and an astrophysicist Marianne (Fiona Dodsworth) whose world views make them seem like an unlikely couple. On stage, they live out varying forms of their relationship, all dependent on the choices made at the time. Maybe it will be happily ever after. Maybe it won’t.

Over 36 different scenes, the story unfolds with the characters replaying their experiences in parallel worlds. In some worlds the stories go on, in others they hit an abrupt end. Dodsworth said the goal is to get people thinking. 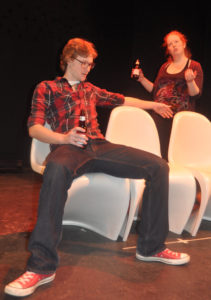 “I don’t know that there’s a definite conclusion to take away from it. I think it’s an emotional experience. We want someone to take away not so much a plot as a feeling,” she said. “If you feel things and have questions, that’s the best possible outcome. That means you paid attention and gave a damn.”

Blakely said the story of the relationship is a journey, both for cast members that have to change emotions quickly and for audience members following along.

“It’s a very emotionally charged piece. There’s scenes that go straight from elation to the most gut-wrenching very sad emotion and there’s no way it gets better. We just take that audience on that journey,” he said. “It’s got some happy, some sad, some angry, and some leaving something to be desired.”

Calling herself an “emotional sponge” Dodsworth said the roller coaster of emotion always strikes her. In readings, she’s found herself crying then laughing in a short time span. While the playwright’s writing style is somewhat abstract, the story is grounded in well-written, relatable characters.

“Roland is a very grounded individual. A lot of what he does is kind of playing by the numbers and playing safely. I kind of relate to that,” Blakely said. “He’s very passionate about what he does and he gets right into it. Beekeeping  is his life.”

While Dodsworth said she doesn’t come from a scientific background like Marianne, she can draw on her own nature of being very passionate, sometimes having her head in the clouds, and relying on her convictions.

“I appreciate Marianne is always standing up for her convictions. Sometimes she puts her foot in her mouth, and that’s OK. They’re real people.”

Dodsworth also said most people in their lives have dealt with some of the life situations thrown at Roland and Marianne like a devastating break-up, a cancer diagnosis, or simply difficulty relating with others. Even with strong actors in their roles, the idea of multiple worlds and open ended themes can be a bit much to process. Knowing that, director Georgia Papanicolaou and technical director Samantha Branderhorst recognized other elements will have to work in harmony with the onstage storytelling.

Music, interspersed with the dialogue and action on stage does much to convey setting and mood.

Musical director Tony Forbes wrote the score he performs live throughout the piece. He said he’s drawn on years of writing and working as a performer to add an additional layer to the experience. “My wife read through the script and bawled her eyes out. It’s pretty heavy,” he said. “I took as much life experience as I had and put it in there — everything but having kids. They don’t have a kid, but these two people experience everything else in life. Anything that can happen does happen in this play.”

In reading the script himself, Forbes said he felt like there were times he had to inject himself into the scenes.

“I feel like I need to be the third cast member. I represent the love and the emotion and stuff that’s circling around it,” he said. “There’s a lot of love in this and a lot of darkness in this. I had this catalogue and I got to use stuff I’ve been writing for 15 years. I call it my opus.”

Dodsworth credited Forbes for making his music feel “naturalistic and integrated,” adding it just seems to pour out of him.

Lighting also offers guidance for the audience to make sense of the story and designer Branderhorst and technician Pete Robinson have worked to create a range of experiences. “There’s five or six specific worlds based on the different moods of the scenes,” Branderhorst said. “It’s been pieced together between my ideas, Georgia’s ideas and what the actors have brought to the stage. “There’s a cold world with no emotion. A jealousy and anger world. A passionate world,” she said. “It very much helps, I think, to piece a linear picture together and help the audience follow what is happening.”

Papanicolaou added there’s a psychological effect created by different colours and sounds that will be at play.

Set designer Jessica Irma Perrone also has had a chance to create as Payne’s script offers no details about the set. She’s used special ultra-violet paint that will look different depending on the lighting and the worlds.

“It’s difficult. Every scene is in a different place,” she said. “What I like is not the main love story, but what the story is trying to tell. There are different possibilities. Every decision you make leads to something else. That’s what I tried to do with my set. What is there now (at the opening curtain) is nothing compared to what it is going to be.”

That set has a round design, allowing it to feel both intimate and expansive all at once — what else for a play that prides itself on conundrums? Papanicolaou admitted the choice of play was ambitious and it challenges the entire cast and crew to push boundaries, but she sees that as a core of Shatterbox.

“I always dreamed of doing theatre and not having boundaries — letting people reach for the stars and everyone in this group has done that,” she said. “Everyone can create from scratch without someone dictating what needs to be done. This is the hardest working team I’ve ever worked with.”

“I think this is a very ambitious play, not something like I’ve ever tried before,” she said. “It’s an experimental playwrighting style and it’s kind of like what we’re trying to do here. We’re trying something different, something non-traditional, and maybe something not everyone will love. We hope they do.”

Papanicolaou said while everyone had their own licence to create, come production metings the group dynamic shone through.

“We’re all on the same page. To actually see this come to life, I can’t believe it’s happening,” she said. “We work hard, we play hard, and I think people are going to be pleasantly surprised.”

The show will run at the Regent Theatre this Friday, Saturday, and Sunday. The Friday and Saturday performances will be at 8 p.m. while Sunday will be a 4 p.m. matinee. Tickets for all three shows are $20 each and are available through the Regent Theatre box office or online at www.shatterboxtheatre.com.