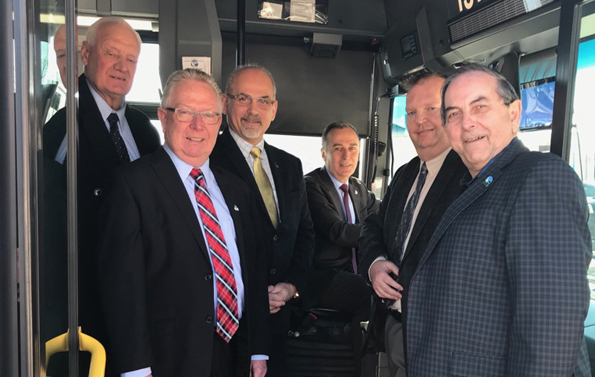 Prince Edward County will receive up to $131,203 over the next 10 years for public transit as part of a new $11.8-billion joint infrastructure program between the federal and provincial governments.

Bay of Quinte MP Neil Ellis announced the allocation in Belleville Friday as the Investing in Canada plan was rolled out on behalf of federal minister of infrastructure and communities Amarjeet Sohi and the provincial infrastructure minister Bob Chiarelli.

The investment, which was calculated based on transit ridership includes $761,892.65 from the federal government and $59,311 from the provincial government.

Ellis indicated the money will help to build communities. “Long-term investments in infrastructure are key to building a strong Canada — connecting people, creating good jobs for the middle class, and building our economy and our communities for the future,” he said. “Canadians living, working, and raising families in our community will be able to enjoy increased opportunities and a more sustainable economic future.”

The County could also benefit from an allocation the Town of Deseronto received Friday as the Deseronto Transit system is one of two operating here, along with the Quinte Access specialized transit service. Hastings-Lennox and Addington MP Mike Bossio was in Deseronto Friday morning to announce a commitment of $281,000 in dedicated funding.

He credited Deseronto for being forward thinking in creating a transit system that now serves five different communities.

“You’ve got a lot bigger communities right now that don’t necessarily see the value (of investing in transit). Deseronto did and now they’re seeing the benefit,” he said. Bossio said he’s spent time advocating on Parliament Hill for transit systems in smaller rural areas because sometimes even MPs and bureaucrats don’t make the connection that rural people require transit connections. “It’s vitally important for rural sustainability that we have this connectivity,” he said.

Bossio added that people use transit for work, education, and medical appointments and transit has been proven to remove barriers for people.