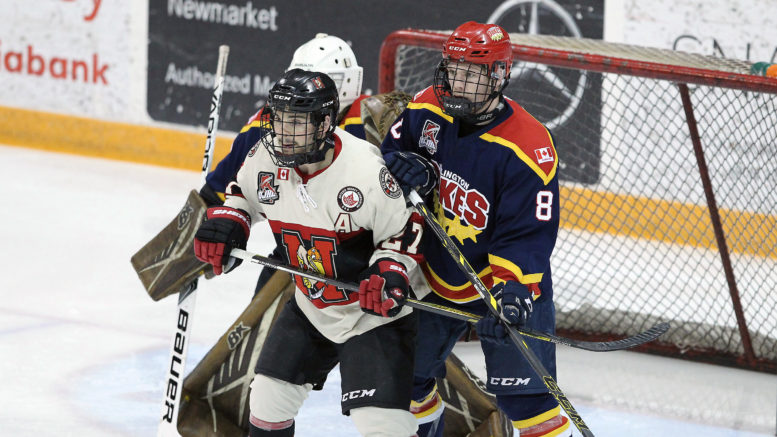 It took until Game 3 of the second round of the 2018 Buckland Cup playoffs but the Wellington Dukes learned they can play with and beat the Newmarket Hurricanes.

Down 2-0 in the series, the Dukes finally turned the tide Tuesday night as they shaded the visiting Canes 2-1 in a key victory for the local Jr. A squad.

Key in that the win not only allowed Wellington up off the mat in the best-of-seven set with Newmarket but that, for the first time this series, the Dukes showed they could bust through the disciplined defensive scheme employed by the Canes.

A relieved John Druce was happy with his club’s response after losing Game 1 3-0 and getting embarrassed 8-1 in Game 2.

“The guys knew their backs were against the wall being down 2-0 and that if they didn’t respond, things were going to go way south. They came out mentally prepared to play and did all the little things we’ve asked them to do and it paid off,” the coach told the Gazette Wednesday morning.

Druce said Tuesday night Wellington made smart decisions with the puck and didn’t allow Newmarket to feast on turnovers.

“We executed what we wanted to by doing all those little things right,” Druce said.

Playing the right way and getting on the board first were vital elements to Wellington’s game.

In order for the Dukes to be successful this post season, it appears the club is going to have to score the first goal of the game.

They were never able to win a contest in the previous series against Pickering without lighting the lamp first and it was the case through the first two contests against Newmarket.

However, the club hasn’t lost when scoring the first goal of a playoff game and that trend rang true Tuesday as the Dukes drew first blood in Game 3.

Just inside five minutes into the opening frame, Mitch Martan found time and space from the slot to put a puck through Newmarket Hurricanes netminder Fraser Kirk and make it 1-0 in favour of the home side.

The goal was setup thanks to a sharp point shot hulking defenceman Noah Lugli was able to deliver and that Kirk could only block and not smother for a whistle.

The Dukes would take a 1-0 lead through the first period and would double that margin in the second. 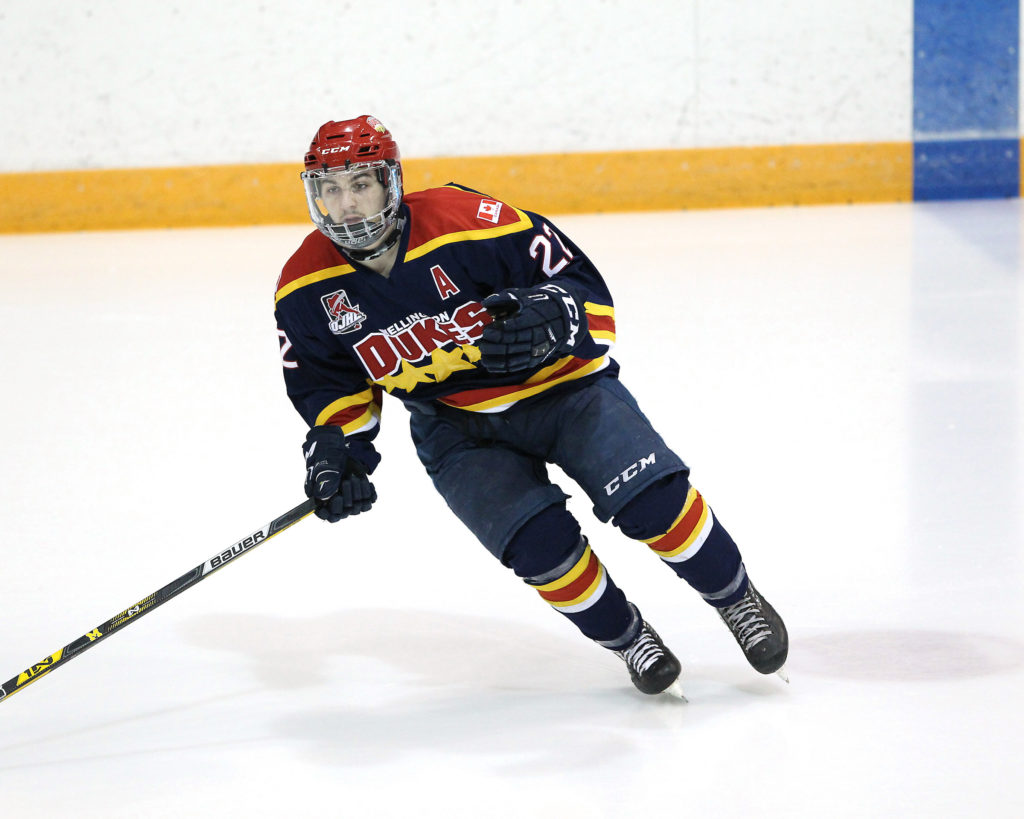 BACK IN STRIDE- Wellington Duke Mitch Martan scored an early goal in Game 3 to help his team win 2-1 and get the locals back into the series against the Newmarket Hurricanes. (Photo by Tim Bates/OJHL Images)

After Mitchell Mendonca took a minor for checking from behind as well as a game misconduct, the Dukes were tasked with killing their third penalty of the game.

But the second frame was owned by Wellington and a single play was somewhat indicative of that trend.

Geoff Lawson was able to spring Teddy McGeen on a partial breakaway at 5:42 and the Windsor native made no mistake, ripping a laser beam over the glove of Kirk for a beautiful shorthanded goal.

The Dukes would outshoot the Canes 15-4 in the second and three of those four Newmarket shots came in the first five minutes of the frame.

Despite not scoring, Wellington had a plethora of chances in the middle stanza and the puck very rarely left the Hurricane zone for more than a few seconds as the Dukes ground Newmarket down in the second.

Druce agreed with the assessment the second period of Game 3 was Wellington’s best frame in the 2018 Buckland Cup finals.

“We were getting pucks deep, moving the puck with authority and moving our feet. If we are not doing those things, we are easy to play against and it’s a night and day difference,” Druce added.

The third might have looked like a different kettle of fish if judging from the box score.

Newmarket would get back in the game at 4:17 after Zach Uens fell at the blueline and allowed Alex Ierullo to break in alone.

Dukes starter Jonah Capriotti made the save but Dukes winger Jackson Arcan failed to pick up Lyam Cripps who was able to collect a loose puck and put it up and over Capriotti’s shoulder to make it a 2-1 score.

The Canes had 17 shots in the frame to Wellington’s three but the Dukes still managed a few dangerous rushes in the third and looked ready to restore their two goal margin no less then a handful of times.

Most of the Newmarket volleys came from the perimeter and, minus a few heart stopping chances and loose pucks in the slot, Wellington came away unscathed.

The most tense sequence for Wellington came in the final 11 seconds as Lawson was tasked with making a diving deflection to interrupt a potential Newmarket equalizer.

A moment later a shot was delivered through a maze of legs but Capriotti was there with his right pad to deflect the puck harmlessly away and preserve the 2-1 win.

After getting humiliated 8-1 in Game 2, Druce thought the East Division champs might have had a point to prove going into Game 3.

“You hope so,” Druce said. “Athletes always want to compete and be the best but that was pretty embarrassing, as a team, to go down like that. I thought this group showed a lot of guts and courage to come back in Game 3 and it’s a great indicator that we have the ability to go out and play a 60 minute game.”

While Wellington has done well to well to avoid the injury bug this season, they can’t seem to stay out of trouble with regards to suspensions.

Sparkplug Dawson Ellis was the latest player to incur an OJHL-mandated sit-down as he was suspended for four games due to a major penalty for checking-from-behind in Game 2.

And it’s not only Wellington that’s faced stiff discipline.

A quick count Wednesday showed that a total of 49 games had been lost due to supplemental discipline through the OJHL and the Ontario Hockey Association.

Perhaps the worst case thus far in the post season was when Jack McBain, an OJHL superstar that could be drafted in the first round of the upcoming NHL cattle call was given a two game suspension in the first round.

Without the (at the time) leading post season points producer in the lineup, the McBain-less Jr. Canadiens were eliminated in six games in the opening round at the hands of the Oakville Blades.

While there needs to be enforcement of the rules on the ice, the rash of suspensions the OJHL has increased and left some of the league’s top talent sitting in the stands.

Last post season, a total of 43 games were handed out in suspensions, meaning this year’s total has eclipsed last years with two and half rounds still to play.

“It’s very unfortunate that it’s happening. You never want to see anybody in a vulnerable position and hits from behind need to be monitored but it’s very unusual to see this many league wide,” Druce said.

Wellington will travel to Newmarket on Thursday night with evening the series in mind.

Game 5 will be played at Essroc Arena on Friday starting at 7:30 p.m.