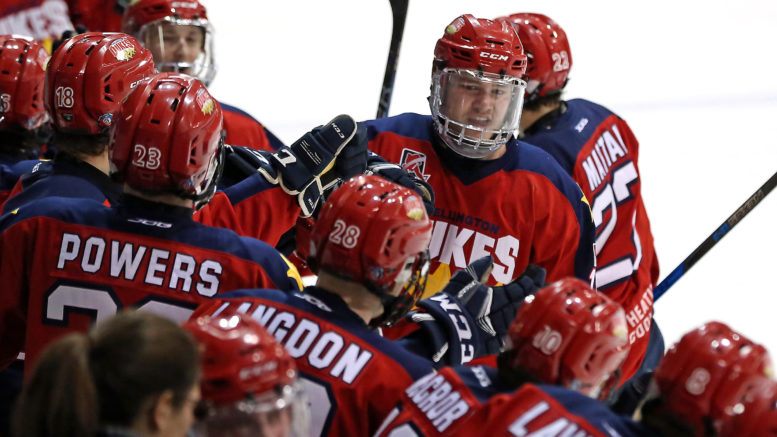 For the second time in the 2018 Buckland Cup playoffs, the Wellington Dukes will be playing in a Game 7.

The locals have come back on the Newmarket Hurricanes after trailing 3-1 in the series to win Games 5 and 6 to force a deciding contest Tuesday night at Essroc Arena.

A pair of gritty 3-2 victories at Essroc on Friday and in Newmarket on Sunday have set the stage for winner-take-all scenario with a trip to the 2018 Northeast Conference Finals against the awaiting Aurora Tigers on the line.

While it was just eight days ago that Wellington fell 8-1 in Game 2, it seems like many moons since the Canes were able to blowout Wellington on home ice.

According to Wellington bench boss John Druce, a couple of factors have played a role in getting his club back into the series and the cusp of moving onto the Buckland Cup semi-finals.

“Game 2 was definitely a wake up call and we didn’t give a very good game,” Druce confirmed. 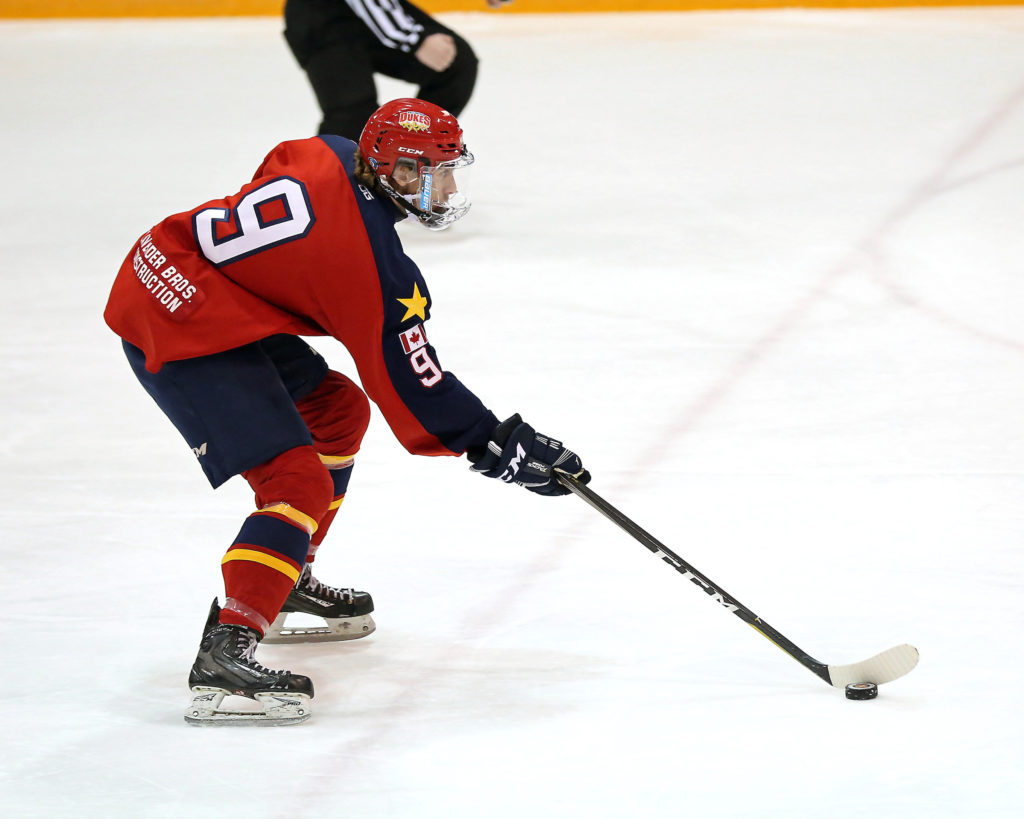 The other aspect has been the addition of call ups from the Greater Ontario Junior Hockey League that have given Wellington a new dimension in the middle of a playoff series.

Former Wellington Duke Josh Supryka became a current Wellington Duke when his Chatham Maroons were eliminated from Sutherland Cup play at the hands of the London Nationals.

Along with Supryka, former OHL forward and Whitby native Bryce Yetman has come aboard the Wellington playoff train from Chatham.

Also drawing into the Wellington lineup are a pair of Niagara Falls Canucks in Frank Pucci and Andrew Barbeau.

Both Sault Ste. Marie natives, Pucci had 85 points in 45 games this season as an elite pivot in the GOJHL while Barbeau provided offence from the blueline, picking up 45 assists with two tallies in 50 games serving as Canucks captain.

“Having the new guys come in and provide some talent and some depth has been great,” Druce said. “When you have internal competition, guys compete harder and push and that’s what we have going on here now.”

There was some speculation that bringing in outsiders at such a critical time in Wellington’s post season drive might be a distraction but Druce said the influx of elite talent was a welcome sight for a team that’s been dealing with injuries and suspensions.

Barbeau fortified the blueline while Yetman has provided instant offence.

During his hockey journey after he left Wellington at the end of 2015, Supryka has learned where the corners of the hockey rink are and is a welcome physical presence.

Of the four, Pucci might have been the slowest to start but looked ready to break out at any moment on Sunday.

“We needed the bodies to be quite honest,” Druce said. “They are older, more mature and understand how to compete at this time of year. They are excited to be here and want to be playing in the Wellington uniform. And it’s contagious, everyone has elevated their game and are competing. It’s really been exciting in the dressing room the last couple of days.”

With players ready to roll off the suspension list and rehabbing from hockey maladies, Druce might need to become an expert juggler to craft a lineup sheet going forward.

“I think tomorrow there will be some harder decisions before Game 7 and it’s not a bad thing, it pushes players to be at their best,” Druce said.

At their best is an accurate description of the Dukes in Games 5 and 6.

Coming off a 3-2 loss on Thursday evening and their playoff hopes in the balance, Wellington fell early to the Newmarket Hurricanes in Game 5 when defenceman Dimitri Mikrogiannakis sprang from the penalty box and deposited a breakaway goal behind Dukes starter Jonah Capriotti just under five minutes into the frame.

The goal looked to be a bad omen for Wellington who had yet to win in the playoffs after allowing the opposing team to score first.

With time winding down in the second in a period they outshot the Canes 14-8, the Dukes finally hit pay dirt in the final minute as Yetman rolled out of the corner and snapped a puck past Newmarket starter Fraser Kirk to tie the game 1-1. 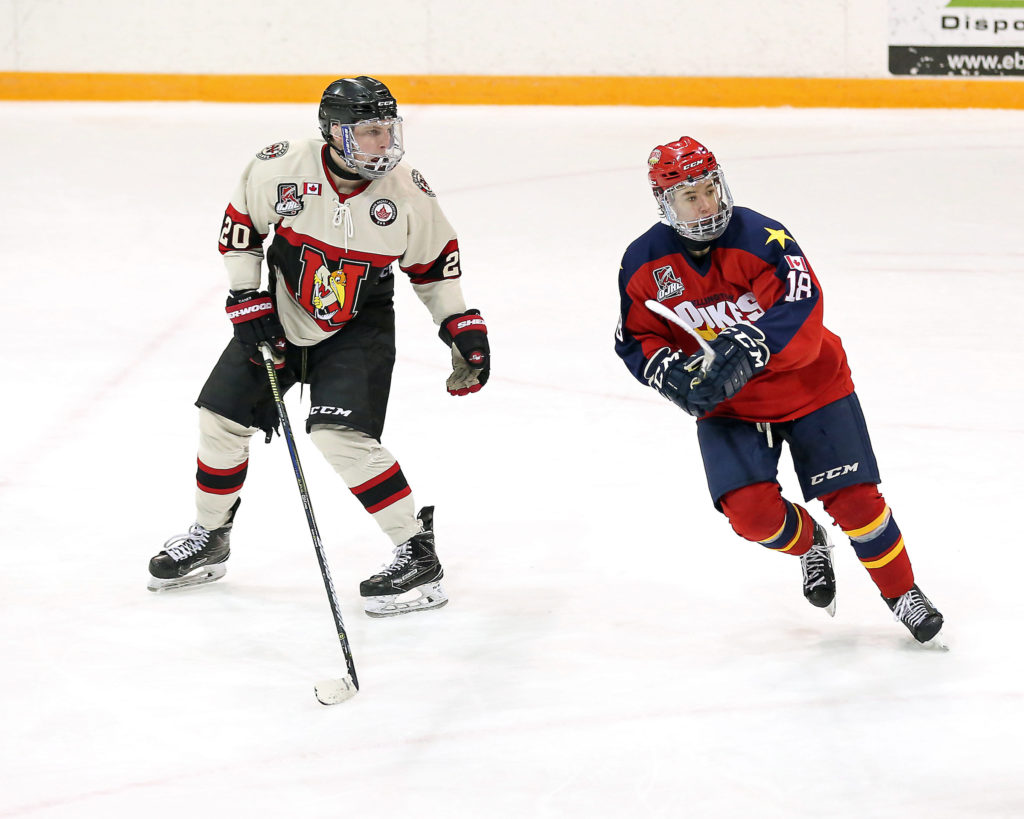 Wellington would move ahead in the third when Zach Uens faked out a checker with a nice move and then used a Newmarket defenceman as a screen, catching Kirk high on the glove side to make it 2-1.

Just over five minutes later and with the Dukes killing a penalty, momentum in the series shifted.

Andrew Rinaldi was able to feed a streaking Teddy McGeen to start a 2-on-1 rush.

Inside the Canes zone, McGeen was able to deliver the puck to Rinaldi who was going to the net and the Montreal native tapped in a backhander on a glorious move before cartwheeling into Kirk and spilling the Newmarket goalie to the ice.

Kirk would have to be lifted from the game and replaced by Kristian Hufsky.

Tempers would flare as the game neared its conclusion and Newmarket’s Christian Cella roughed up an OHA linesman who was breaking up a wrestling match, drawing a seven game suspension in the process.

Adam Trotman would score a powerplay goal with less than two seconds of the clock to finalize the scoring at 3-2 but Wellington skated off with the win.

On Sunday, Wellington was able to get out to a 3-0 lead early in the contest but was forced to hang on as Newmarket responded with a pair in the second.

Wellington opened the scoring off a fortuitous bounce in the Canes end and it was Teddy McGeen collecting a loose puck and feeding Ben Evans in the slot with just over two minutes to play.

Newmarket had a chance to tie it in the dying moments as Alex Ierullo drew a penalty shot with 17 seconds left in the stanza but it was Capriotti standing tall and staring down the speedy Newmarket forward.

In the second, Colin Doyle drove to the Newmarket net and would slip it underneath Kirk exactly 60 seconds in to make it 2-0.

Later in the frame, a Uens point blast while Wellington was enjoying a 5-on-3 man advantage got the spread to three goals but the Canes marched back.

Ryan Hunt batted home a power play goal just a over a minute after Uens had scored.

Yetman had a chance to to bury a shorthanded marker on a breakaway but just missed and then Newmarket quickly turned the puck back up ice and it was Eric Eremita beating Capriotti to make it 3-2.

In the third, Wellington had a pair of great chances to increase the lead including Evans putting the puck through the blue paint and out the other side of the crease while staring at an open net and Yetman being foiled on a penalty shot attempt.

Capriotti was solid in the Wellington net down the stretch and weathered any storm the Hurricanes might have started in the Dukes end.

The win sets up Tuesday night’s Game 7 match and Druce likes the fact his club was able to respond well in a similar situation in the opening round against Pickering.

“You have to battle to win series like these and I think the players are developing a mentality of doing whatever it takes to persevere,”Druce said. “We’ve made some key adjustments and that and the experience it’s going to be of value to us Tuesday night, no question.”