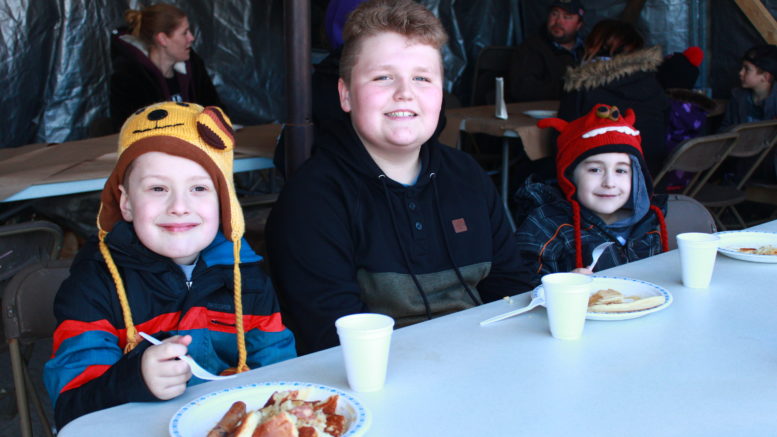 Even after 17 years, Maple in the County continues to expand its reach to new audiences.

The annual celebration of all things maple annually attracts between 10,000 and 15,000 visitors. Among those who sampled the offerings of some of the 12 participating sugarbushes were Toronto area friends Vera Ingham and Dianne McGregor. Neither had visited Prince Edward County prior to last weekend’s event.

The pair began their maple adventures at Three Dog Winery & Sugarbush before stopping at Roblin’s Maple Syrup. After getting a tour of the operation, Ingham said she came away shocked with how sophisticated the process has become.

“I’m actually very impressed with the way they make maple syrup now, I had no idea,” she said. “We took the little tour in the back and saw how they do the reverse osmosis to remove 70 per cent of the water, I did not know that. From what I remember, you boil it down until you get the maple syrup, but this is so much more concentrated — it’s incredible.”

McGregor agreed, saying it was nice to learn more about the process.

“They really put more education into it now and more science to it,” she said. “When I was a kid it was like ‘there you go’ and here it’s colour, sugar content — it’s almost a winery version of maple syrup.”

Both agreed they’d overlooked Prince Edward County as a destination.

McGregor said she and Ingham know the Niagara wine region well, but both were surprised to find so many wineries in the county.

“It was like ‘wow’, I didn’t do enough homework up here is all I can say, it’s all such a shock,” she said. “It’s definitely a destination place now for us.We originally came here thinking, ‘we’re here from Friday until Monday, are we going to have enough stuff to do?’ Yeah, I think so.”

While both the crowds and the runs were steady this year, some producers noted the sugar content of the sap seemed to be down.

“An average year for sugar content is two per cent and we’ve only hit one day where the sap has been two per cent,” said Phil Roblin of Roblin’s Maple Syrup.

Regardless, he said he expected to generate about a litre of syrup per tap for the season.

Since getting his start in the maple industry at eight years old with a couple of buckets, Roblin’s operation has grown to 1,100 taps in two sugarbushes. It was the operation’s second year participating in Maple in the County and Roblin said it was fun to see the people out enjoying the season.

“It’s great to see your local community out and people from the surrounding area,” he said.

Over at Justin’s Maple Syrup, Justin Williams said he was happy with the steady stream of visitors winding their way to the County Rd. 32 sugarbush. He said it could be a good maple season for the 500-tap operation if the weather holds out.

“We’ve been doing syrup for about a month so far this year and I’m at about half of a normal year’s production,” he said. “Some years one month is the whole season, so it’s looking like we have another two weeks at least left looking at the long-term forecast … if we get the good weather to keep up the sap runs, it could be a really good year.”

Williams said one of the best parts about Maple in the County is the opportunity it presents to educate members of the public about the product.

“I love talking to people and explaining to them how syrup is produced,” he said. “There’s a lot of people that buy syrup, but they don’t know the process behind it.”

Also in his second year participating in Maple in the County, Williams said the event has helped him increase exposure for his business. He’s had visitors from Toronto, Ottawa and beyond.

“They travel specifically for this event,” he said. “It’s not just county people coming out, we’re reaching provincewide.”

On the western side of the county, Strictly Maple’s Justin VanNiejenhuis said Maple production got off to a slow start this season, but had picked up in the last week before the event, he said.

“We had a bit of a rough start so we didn’t produce a lot right off, but the last week or so has been pretty good,” he said.

Even so, he said it had been a very busy weekend and seemed like it was the operation’s best year yet since joining Maple in the County four years ago.