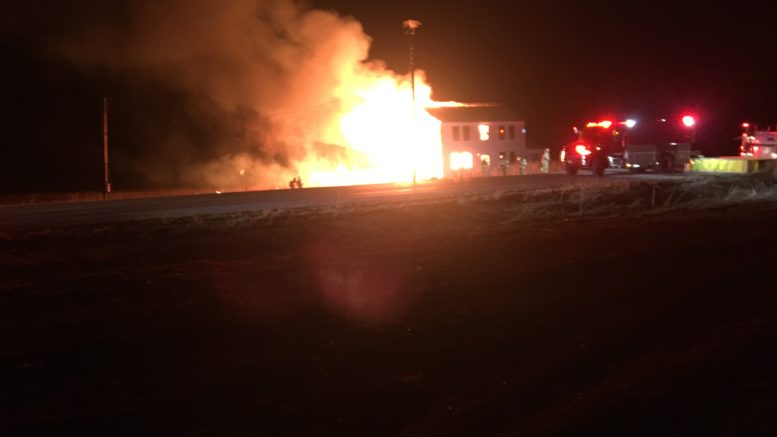 Prince Edward County firefighters have been kept busy over the past week combatting a number of blazes including a fire at an unoccupied home in Sophiasburgh.

Deputy Fire Chief Robert Rutter confirmed to the Gazette Wednesday that the Ontario Fire Marshall’s Office and the Ontario Provincial Police are investigating a fire at an unoccupied home on 787 County rd. 15 near Northport

At around 9:30 p.m. Monday night, firefighters from station four responded to an unoccupied farm house and battled a pesky blaze for several hours.

Rutter was unable to assign a value to the house in terms of damage and directed all inquiries concerning its origin to either the OFMC or the OPP.

Thankfully the fire was kept under control as its proximity to the Big Island Marsh could have lead to an extremely dangerous situation.

“The marsh was a big concern for us because of the strong winds out of the south,” Rutter said. “The embers were drifting to the marsh and we had firefighters lined up with equipment at the marsh making sure nothing started there.”

In the early hours Monday morning, a home on Sunrise drive in Ameliasburgh burned up, causing $400,000 in damages.

“It was a complete loss,” Rutter confirmed. “The cause is undetermined at this time but is believed to be electrical and not suspicious.”

About two dozen firefighters from Stations 5,8 and 9 responded to the fire and the group had water support from Station 6.

“The home owners were in the house at the time and they were awakened and able to reach safety,” Rutter added.

Despite a recent rain shower, its expected the burn ban that was issued by Prince Edward County Fire and Rescue earlier this week will continue.

“We still need a lot of rain and we will continue to monitor it but the ban will remain in place for the time being.

To illustrate his point, Rutter said County firefighters attended three different locations in the span of 90 minutes Monday afternoon and dealt with blazes that started outside.