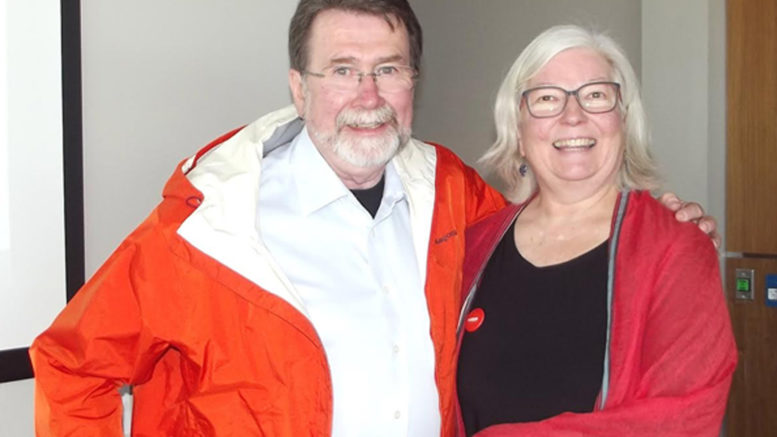 Team orange - Joanne Belanger, right, of Quinte West will represent the NDP in the Bay of Quinte riding in the June provincial election. Joining her here is riding association president Merrill Stewart during a nomination meeting at the Trent Port Marina Sunday. (Terry McNamee/For The Gazette)

A life devoted to achieving social justice and helping those in need has led to Joanne Belanger becoming the newly-chosen provincial candidate of the New Democratic Party for the Bay of Quinte riding.

The Quinte West resident was the unanimous choice at the riding association nomination meeting on Sunday, March 25, at the Trent Port Marina in Trenton. The meeting was attended by about 20 people.

“Our candidate search started in January 2017, “Stewart said. “We had serious conversations with 13 people.”

However, he said, all those approached decided that the commitment would have too great an impact on their jobs and families. Then in late January of this year, Belanger’s name came up.

“She said yes on Feb. 3,” Steward said. “It took a week to fill out the paperwork, and we filed the paperwork on Feb. 8.”

Party approval was received in early March. The deadline for applying to be a candidate was March 15, but no other vetted and approved candidates come forward. Stewart said that the vetting process has become a serious issue for all political parties to ensure that there is nothing in a candidate’s history to cause problems for the party down the road. As well, he said, it is crucial to find candidates with the necessary qualifications and ability to handle the job if elected to the legislature.

That should not be a problem for Belanger, who has extensive experience in the public sector. She served as a trustee on the Hastings and Prince Edward Roman Catholic School board from 1994 to 1997, has spent 26 years as a counsellor in many different settings, including working with military families and veterans with PTSD and has been a high school chaplain for the past 12 years at Nicholson Catholic College in Belleville.

She is a member of the Canadian Catholic Development and Peace Leadership Team for the Archdiocese of Kingston, an active member of her parish, St. James the Minor in Stirling and is a poet and member of the League of Canadian Poets and the Quinte Arts Council.

Belanger said she joined the NDP while still in university, and has been very active in social issues her entire adult life, both in her own right and as the spouse of former federal NDP candidate Terry Cassidy, who also served on Quinte West council for two decades.

She is very concerned about the increasing gap between the haves and have-nots in society.

“There is no lack of issues,” she said. “Everything’s a bit broken and it will take awhile to fix it.”

Some of her biggest concerns are the need for universal pharmacare, dental care and vision care, improving hospital wait times, keeping local hospitals open and sustainable with adequate funding and ensuring that both home care and nursing homes are effective and safe for those who need it.

“We do have an issue with poverty here,” Belanger said. Overall in Ontario, “The wealthy get wealthier, and the (poor) get deeper and deeper in debt.”

Province-wide, she said, Ontario needs to make access to water a basic human right and not permit water resources to be sold to bottled water companies at the expense of local communities. She said the province needs to invest in basic infrastructure and not build toll roads that are then sold to foreign entities, and that Hydro One should be returned to public ownership.

“I think that an NDP government in is the only path,” Belanger said.