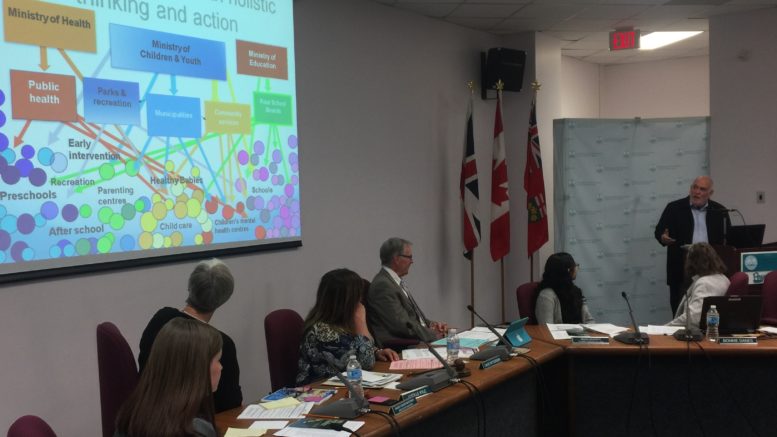 A heavyweight in the field of education in the province of Ontario and a Sophiasburgh resident is urging the Hastings and Prince Edward District School Board to support a community hub concept at Sophiasburgh Central School.

Dr. Charles Pascal, co-creator of the Ministry of Education’s full-day kindergarten initiative and professor of applied psychology & human development at University of Toronto delivered an impassioned presentation to Board trustees and senior staff members Monday night.

In his remarks to the Board, the former Deputy Minister of Education made it very clear there it was his firm belief there was political will to make the community hub at Sophiasburgh a reality.

A group of dedicated individuals in the northeast Prince Edward County ward have been working hard after the elementary school was given a one-year reprieve by trustees last summer when the Sophiasburgh Central was slated to be consolidated and students bussed to Picton in the fall of 2017.

With the reprieve came a number of Board-instituted caveats that the school would maintain a certain threshold of students.

The County Food Hub steering group has been working behind the scenes to meet and/exceed these thresholds by way of creating a shared commercial kitchen that would not only be a revenue generator for the school but would also allow educators to craft a culinary-based curriculum for students and become a centre of excellence for the booming argi-business and agri-tourism trade in Prince Edward County.

The first phase of the project which includes converting excess classroom space to kitchen space, creating new entrances and storage is expected to cost $905,000 and the deadline for the steering committee to have all the pieces in place is April 30.

Pascal said the group was closing in on $400,000 with just over a month remaining but wanted to illustrate that there are funds available through Premier Kathleen Wynne’s Community Hub Framework Advisory Group.

To illustrate this point, Pascal presented correspondence from Special Advisor Karen Pitre that the Ministry of Education has provided $50 million to school boards to support the expansion of community hub use in schools which will benefit both students and the local community through retrofits from surplus classroom into community hub space.

“Trustees, how grateful i am and how grateful dozens of community leaders are that you kept a particular school open to see what is possible and the the response has been remarkable,” Pascal said. “I’m hear to tell you the Provincial government is ready to catch this Board doing something quite remarkable and something right together with community partners.”

As a member of the steering committee, Pascal has been privy to the back and forth dialogues between the group and Board staffers and has noted there has been good rapport.

“Sometimes you see something that could be an obstacle but I’m hear to say to you as based on my knowledge as someone that knows how things are done, my sense is how this project is developing, there is absolutely no obstacle that can’t be overcome for this to become a remarkable project,
Pascal said, again alluding to the political will to make a hub at SCS a reality

Southeast Hastings Trustee Justin Bray said from the outset that he hopes all the pieces can come together for the County Food Hub project to be realized but remains concerns that there are no guidelines on partnerships between Boards of Education and community partners when it comes to this type of initiative.

“It’s frustating for us because in the first place, we are in the predicament we are in because school funding got cut left and right and all of sudden we get offered partnerships and we get offered all kinds of money,” Bray said.

In Bray’s experience, the average length of ownership for a project involving parents at a school is four years and after that, new partners may or may not appear.

“It’s like sailing a ship in the dark and if it does great, that’s great and if doesn’t, it ultimately winds up hurting the students,” Bray said.

Pascal said sustainability was a good talking point and explained that 60 to 70 per cent of the partners don’t have students involved or attending SCS.

Pascal said the the partnerships that are in place are very strong and harkened back to his time in the provincial government’s social services branch when projects were trotted out before him.

“I know what good projects look like and I know what bad ones look like. I understand sustainability and this is not a long shot-my kid needs to got to that school-type project. This a medium to long range winner because of the partnerships that are being built and exist currently in the community.

Pascal concluded his presentation telling trustees they have been presented an opportunity to be innovative and creative as well as providing a path for youth to return to the community.

“What do we do about inviting a better future so our kids stay in school, graduate PECI, go elsewhere for post secondary and then come back here in droves?” Pascal wondered rhetorically.