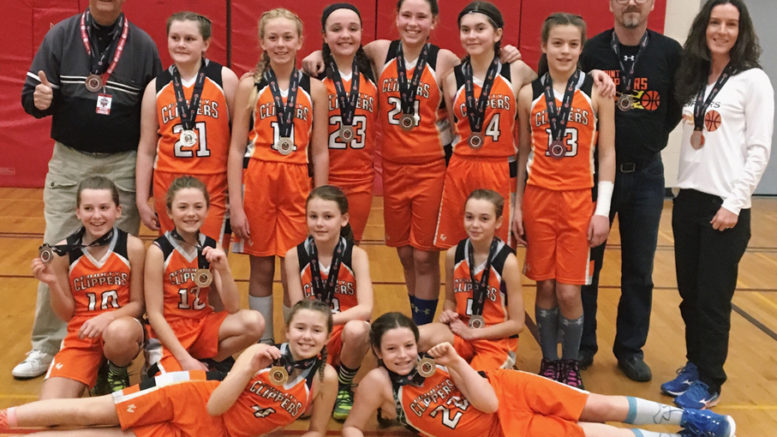 Locals sweep through pool play before falling to Valhalla in final

The Under-12 County Clippers girls nearly finished their OBA rep season with gold at the Ontario Cup provincial championship tournament.

Facing similarly seeded teams from across the province in Newmarket last weekend, the Clippers opened against a very familiar foe in the Belleville Spirits. The orange-clad squad started strong and held on for a 21-16 win.

In Game 2, the Clippers met a close match from St. Thomas. The game went back-and-forth right to the final buzzer. When it sounded, the Clippers led by a single point 26-25.

The adrenaline carried over to the final game of pool play when the Clippers took the court against Gloucester. With confidence and determination, the Clippers punched their tickets to the gold-medal game with a 20-16 decision.

The final saw the Clippers face a tough team from Valhalla that had also won all of its games in the tournament. Despite their best efforts, their foes were too strong as the Clippers settled for silver medals in a 32-17 loss.

Bill Latchford, who coached in the County Clippers system for the first time this season, said he was incredibly proud and impressed by his team throughout their 10-10 season.

“Coming out of retirement after 40 years of coaching to teach these enthusiastic girls how to play a game and acquire new friends and skills in the process has been super rewarding for me,” he said. “My coaching style can be a little ‘in your face’ but tempered with many kudos when they get it right. These girls never wavered and showed true togetherness, win or los. Supported by terrific parents, the growth in individual and team dynamics has been phenomenal.”

The Clippers went through the season with goals of not only winning but expanding their knowledge, skills, and strength both individually and as a team. Latchford expressed his gratitude to assistant coach Phil Bender and manager Laurie Spencer for their dedication to the team.

Under-16 boys lose four in Toronto

It was a tough weekend for the Pretsell Davies Thompson Benton Law Under-16 County Clippers in Toronto as the team dropped four games.

First, the Clippers fell to Cambridge 54-36 after being outscored 21-8 in the fourth quarter.

Next, they struggled to execute against South Simcoe in a 68-36 setback.

The team’s third tip had a similar story line to the first as they were outscored 25-7 in the final quarter in a 60-43 loss to the London Ramblers.

The Clippers saved their best for last, coming up just short to the Orillia Lakers 72-70. Cam Pero had four three-pointers and 21 points overall. The Clippers are in Kingston tonight for an 6 p.m. exhibition against the Impact at Frontenac Secondary School.