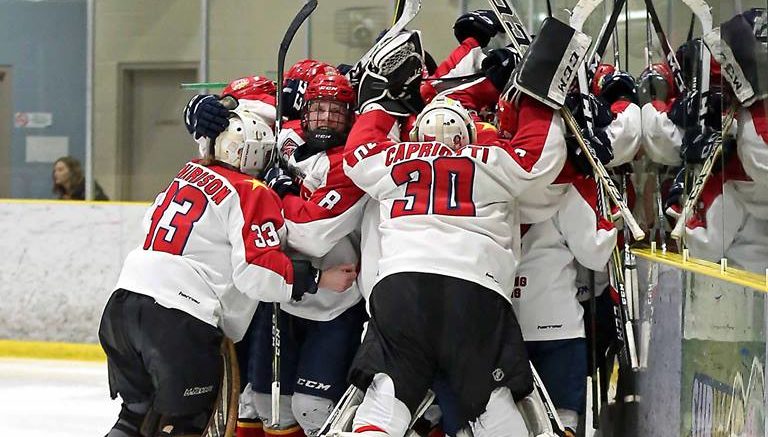 At times of high tension involving the Wellington Dukes, your humble scribe often thinks back to the old Dukedome and wonders how a particular high stakes game might have played out inside a jammed band box instead of the cavernous Essroc Arena.

After all, the frozen bath tub on Niles st. was the setting for almost all the Wellington Duke triumphs- the 2011 Buckland Cup championship being the lone notable exception.

Yes, the Wellington Dukes haven’t been able to stock their new(er) digs with very many high drama memories since making the move to the ‘Roc in early 2011.

But the on Tuesday in front of over 1,000 fans, the locals made it a late March night to remember with a dramatic Game 7 3-2 win over the Newmarket Hurricanes in overtime.

The Game 7 win in round two was Wellington’s second ultimate victory game in the playoffs after needing seven to vanquish the Pickering Panthers a round earlier.

The team that always seems to do things the hard way did just that, giving up a game tying goal with 0.6 seconds left on the clock before winning it on their first shot in the extra session.

How’s that for making an ever-lasting memory?

It was captain Colin Doyle who seemed to be at the centre of everything Tuesday night.

Playing in what could have been his final junior hockey game, the Campbellford native was everything for the Dukes.

After a scoreless first period, Wellington found themselves down a goal early as Owen Ramsay’s harmless looking shot from the half wall handcuffed Dukes starter Jonah Capriotti at 1:48 of the middle stanza.

Wellington would respond at 7:19 as craft veteran Teddy McGeen used a Newmarket defender as a screen and beat Fraser Kirk from well out on the powerplay to equalize the score at 1-1.

The OJHL’s best penalty killing unit in the playoffs was tested again a few minutes later and it was one of those cause-and effect moments that are hauntingly traceable.

Mitch Martan saw this and attacked the Hurricanes net knowing that Dedonato wouldn’t be able to strip him of the puck. 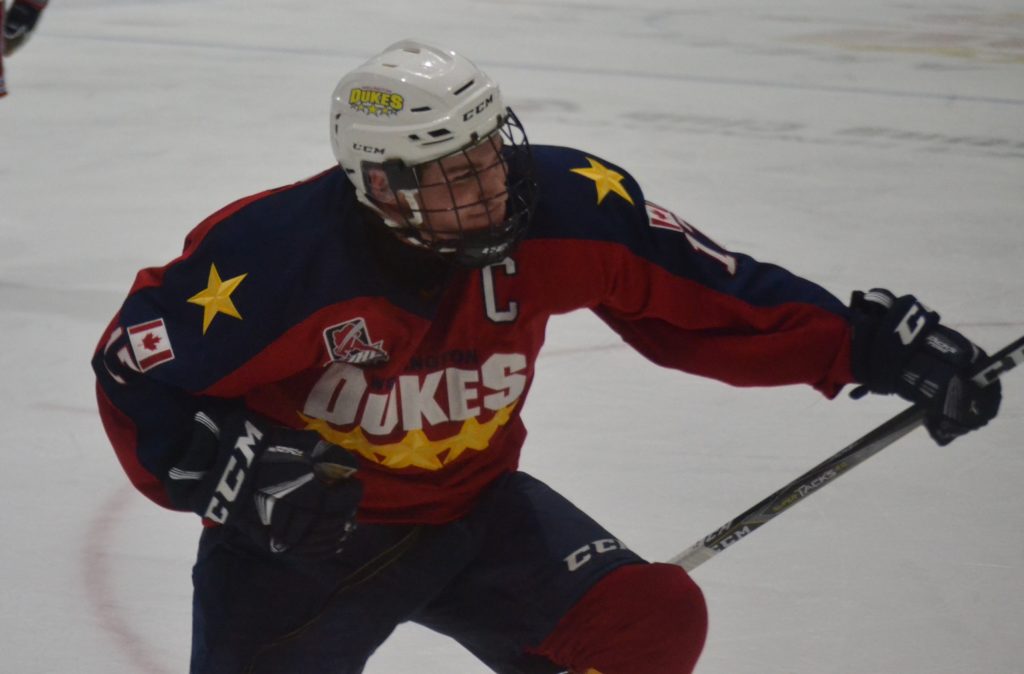 Eventually, the puck deflected off Kirk and right to Doyle at the side of the net and the captain was quick with an accurate release, putting the locals ahead 2-1 with just over seven minutes left in the frame.

The score stayed that way as Wellington tried to grind down the Hurricanes and it seemed, as the game waned, to be a good strategy.

But playing in their first elimination game of the playoffs, Newmarket wasn’t ready to say goodbye to the 2018 playoffs.

A scramble in front of Capriotti lead to Doyle wrapping his arm around the head of Cole Thiessen with under five seconds left and giving Newmarket a brief powerplay opportunity.

Dukes centre Ben Evans had a few options on how to play the crucial faceoff to Capriotti’s left and chose to drive ahead when the puck dropped.

It turned out bad as it Dedonato was able to somehow gather the loose disc, flip a back hand pass from the side of the net and give Thiessen just enough time to score an equalizer and stun a raucous hometown crowd that were ready to salute their team for punching Wellington’s first ticket to the Buckland Cup Semi-Finals since 2011.

There would be a lot of hand wringing in the stands and the Essroc Arena concourse during intermission but a refocused Wellington team emerged for it’s first overtime session since the opening round of the playoffs.

After Newmarket dumped the puck into the Wellington zone off the opening face off, Martan would lug the biscuit out of the Dukes zone and eventually make a neat pass to Doyle to set up an abbreviated 2-on-1 with McGeen.

Doyle stalked closer to Kirk and then beat the Newmarket goalie with a shot to the far post, setting off bedlam inside the Essroc Arena as the fans were awash with a sense of relief.

And that relief spread to Doyle who might have been playing a little guilty after taking the penalty late that lead to the equalizer.

“Sitting in the box I admit I was pretty nervous and then they scored but in the intermission, we were able to regroup and we decided that we weren’t going to let something like that end our season,” Doyle told the Gazette after the game. “We got focused in the dressing room and wanted to have a good start to overtime.”

The captain praised Martan’s vision to spring the short two-on-one that setup the short side overtime winner.

“It was a great pass by Marty and he’s always able to find me with time and space like that. I got closer, decided to shoot and luckily, it went in,” Doyle said.

The fourth straight 3-2 game of the series which Wellington won three of indicates how close this series was after an 8-1 blowout in Game 2.

Wellington will open on the road for the first time in the 2018 Buckland Cup playoffs as they travel to Aurora on Thursday.

The Dukes will play a rare Saturday night game at Essroc Arena for Game 2.