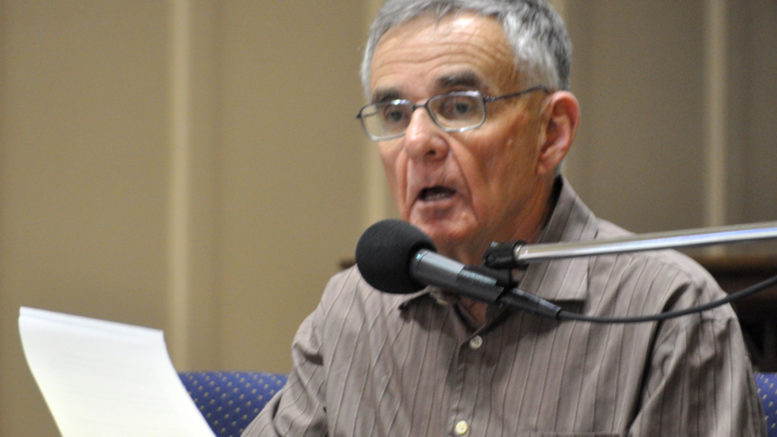 Promoting wellness - W.H. Williamson Insurance president Frank Wright speaks about his experiences overcoming depression during Mental Health: Yours...Mine at St. Andrew’s Church Thursday. By speaking out about his experiences, Wright hoped to help others with their own mental health. (Adam Bramburger/Gazette staff)

Some 39 years ago, the face of a pillar of longevity in Picton’s business community was struggling to fight his demons and to find reason to continue on. On Thursday, he opened up about his dark days in hopes that he might help others.

“In the summer of 1979, I was having trouble eating, I could not sleep, my mind was racing a million miles an hour and I was having great difficulties with the routine of daily life,” W.H. Williamson Insurance & Co. president Frank Wright recalled. “I was tested for many medical problems, which all came back negative. I thought if I did not get help, life was not worth living.” 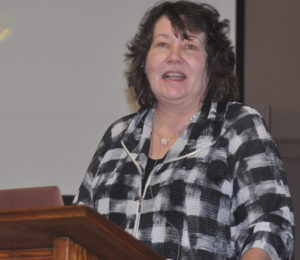 Wright was one of two featured speakers at St. Andrew’s for Mental Health: Yours… Mine, alongside Dr. Heather Stuart, the Bell Canada mental health and anti-stigma research chair at Queen’s University. He laid out his truth, shaking at times as he read.

Wright said he eventually convinced his family doctor to send him to a mental health clinic before spending a year as a patient at Belleville General Hospital doing relaxation therapy. He felt well again and went back to his regular routine, but just six years later, he fell into a deeper state of depression and was re-admitted to the hospital for seven weeks. Wright was treated on the same floor as people suffering addiction to alcohol and drugs — an experience that greatly changed his outlook on those afflictions. He also wondered why he was there.

“I wanted to know why I was struggling with depression. I don’t smoke, drink alcohol or take street drugs. Both my grandmother and my mother had a very serious mental health problem, so I guess I inherited the gene, but there’s more to it than that. I discovered I was a workaholic and a volunteer-aholic. I guess my body was trying to tell me I was tired and I needed a break,” he said.

Some 10 years later, his depression came back again. That time, Wright was fortunate to have a friend refer him to a psychiatrist that found the right medicine to keep his dripping depression away. He learned to be more open than ever before and he also learned to say “No.”

Wright said in his experience, mental health is a difficult subject to grasp because it isn’t easily defined and there’s no one-size-fits-all treatment. Also, there’s a shame and stigma — mostly self-inflicted — that seems to go hand-in-hand with it.

“Depression is like cancer. There are many types, some easier to treat than others and it can kill. I assure you, it is very rare for someone with mental depression to go out and shoot people but that (perception) is likely why people hide it,” he said. “You’re more likely to hurt yourself than somebody else. It’s also important to know you don’t get into a deep depression overnight, nor do you get out of it overnight. The recovery is slow and it’s very hard mental work.”

To illustrate the difficulty, Wright said his wife Arlene is a cancer survivor but she felt it was more difficult for her to deal with his depression than her own cancer. That’s also an illustration that a struggle with mental health issues impacts not only the survivor but a wide circle around him.

“You don’t live in a vacuum,” Arlene said. “There was such an impact on everyone else and maybe that whole stigma arises because there isn’t a lot of support. I was never really encouraged to be involved in the recovery or even to understand it. Unless I did my own research or was intuitive about it, how could I help?”

Arlene backed up her husband’s assertion about cancer, stating she didn’t want to be flippant about it, but “really it was a piece of cake dealing with that, my own issue, as opposed to understanding what Frank was going through and being able to help him” particularly as he didn’t quite understand himself what was ailing him. She said the people around her husband were crucial to his well-being.

“I think a very, very key part to this whole scenario of dealing with mental health is to have supports out there and have the family be a part of the solution and not a part of the problem,” she said.

Arlene said the people in the Williamson office learned how to be allies and advocates and they learned how to manage the office without him at times and rally to keep their day-to-day routines at work and at home in tact.

Frank agreed with that assessment and said the ordeal has helped shape his life.

“My experience with depression is I would not sell it for $1 million, nor would I take $1 million to go through it again. It has not hurt my business, friendships, or the organizations I belong to. I can talk about it and suggest the real help has to come from the medical field.”

His story proved to be cathartic as members of the audience discussed their own personal situations for well over an hour, whether they were dealing with their own mental illness, or speaking as caregivers or peers to those who have lived with the spectrum of mental illness.

Brian Gillespie described himself as a caregiver of a person who has dealt with depression. He stated from experience the medical journey people dealing with mental illness take is an “absolute fright” that takes a lot of courage.

“I admire anyone who goes on that and does it. Just taking that first step, you have to admit so much,” he said. “The person that I care for has been on that walk in finding the appropriate treatment. It took a long, long time with bad times and dark times. To encourage you, I would say it will be a fight, but if you persevere, ask the right questions, and find the right support, you will find what works… It’s a journey you may have to go on and it may not be easy but you don’t have to do it alone.”

Several people spoke about fear in telling their employers, family, and friends that they’re going through mental health. Stuart said much of that comes down to stigma, which makes people feel that they’re somehow lesser figures in society.

“There are really a number of different components to stigma. It’s how we think about people who have mental health problems, how we devalue them and think they’re somehow less than normal or less than human. It’s the way we feel about them. We attach stereotypes — they’re angry. They’re unpredictable. They’re lazy. There’s emotions attached and we don’t like them or want to be around them. Once that prejudice sets in, we distance ourselves from them and they become quite marginalized.”

Stuart added that self-stigma is often the worst type as it triggers mental baggage and withdrawal, which often compounds problems. Sometimes it can overshadow everything else in a person’s life, including other health problems. Stuart indicated research has determined that people who have severe mental illness die 15-20 years earlier than those who don’t encounter mental illness. She shared that in her experience, the system doesn’t set a priority on mental health issues. There’s also chronic underfunding.

“Families realize how bad the system is broken once they have a family member that needs care. They don’t know how to navigate, they don’t know where to go. They realize waiting lists are long and the system is not easily accessible. We need to think about fixing those cracks and that only happens when we talk about them.”

Stuart said there are some simple ways all people can promote a culture of change. One way is finding language that doesn’t stigmatize conditions, talking about people with a mental health diagnosis, rather than divisive words like crazy or mental. Another is educating the general public about conditions like depression and anxiety so they understand signs of illness. Simply offering acts of kindness and being open to just listen and be supportive are also effective. Lastly, talking and normalizing mental health is a must to stopping stigma.

From a medical perspective, Stuart said she’d like to see fewer silos among doctors treating mental health, physical health, and addictions. She also indicated that the more doctors and nurses who have basic competencies with mental health the better.

Suzanne White, a guidance counsellor at PECI, welcomed the chance to further the conversation in her community. She spoke about her own experience having a miscarriage and how colleagues knew about that very private deal offered her comfort as they shared their own stories and those of friends and family. While she said mental health afflictions impact people over a longer time and are more complex, that gave her a chance to understand the stigma they face.

“(With support) you don’t feel so alone. We feel like we’re the only one and we don’t share about it. We don’t feel there’s other people going through what we’re going through. We hide it from our bosses, we hide if from our family members,” she said. “We don’t really know how to help people because we haven’t really been educated.”

“As a high school person, we have a substantial number of students at our school who are experiencing a wide variety of concerns and issues. In Prince Edward County, we don’t have the supports we need to be able to support teenagers and adults,” she said. “We can go through this discussion and as a community, we need to be pushing to have way more supports in place for adolescents to go. They’re turning to find help, but a lot of us don’t have the right training or credentials. It’s a long process and we need those supports here in our community.”

The discussion will continue.

Gillespie reminded the audience St. Andrew’s will be hosting at session with the Recreation Outreach Centre and Children’s Mental Health Services at 7 p.m. Wednesday with a focus on youth and mental wellbeing. Given the robust discussion Thursday, Gillespie said he hopes that meeting will be one part of an ongoing community discussion.

“These are obviously very current and needed issues to talk about,” he said. “We really appreciate that you’ve showed up here this afternoon and taken the courage to share. Thank you for coming. We’d like to do this again.”