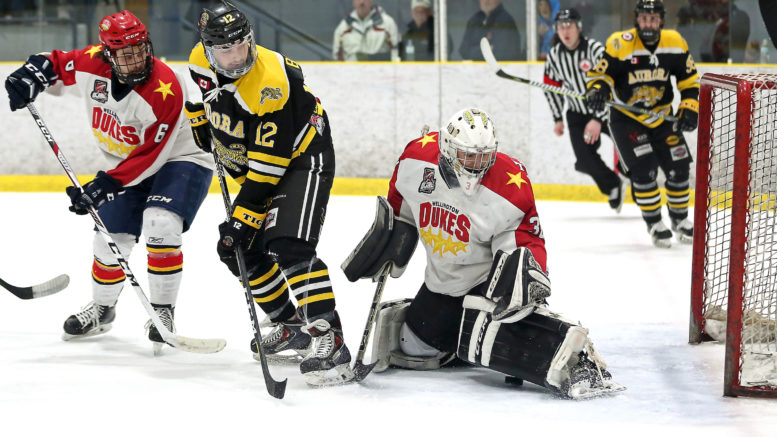 The Wellington Dukes have started their 2018 Buckland Cup Semi-finals series off on the right foot.

Playing this late into the Ontario Junior Hockey League playoffs for the first time in seven springs, the Wellington outfit won Games 1 and 2 to open their series with the Aurora Tigers, stealing home ice advantage and putting their opponents in an early hole.

The Tigers host Game 3 Tuesday night and will likely be desperate to avoid falling behind the hard-charging Dukes three games to none.

Wellington was able to skate away from the Aurora Community Centre bandbox on Thursday with a 2-1 win and then double down on their lead with decisive 6-2 victory in front of just over 900 at Essroc Arena on a rare Saturday night game in Dukesland.

Wellington is coming off a second straight seven game set after taking the Newmarket Hurricanes in the maximum number of games in the previous round.

Meanwhile, the Tigers dumped the Cobourg Cougars in five games and were tasked with waiting around for the winner of the Canes-Dukes set.

Wellington Benchboss John Druce said that coming off the dramatic series against Newmarket just two nights earlier meant his troops were fresh from a fight and that might have helped Wellington get a jump on the Tabbies in the opener.

“I think coming off that series and coming right back into next round might have made a difference,” Druce told the Gazette Monday. “(Aurora) had a week off and I think we started the game exceptionally well.”

Wellington was ready to play from the opening puck drop.

Mitchell Mendonca made a nice block on a point shot that set up a partial breakaway on which he drew a penalty shot. Mendonca would be stoned by Tigers Game 1 starter Bradley von Schubert on the attempt but Wellington would strike first just over two minutes later off an offensive zone faceoff.

Colin Doyle won a draw back to the blueline where Mason Snell was quick to fire it back to the Tiger net, catching Doyle as he deflected the point volley into the Aurora cage at 3:49.

Later in the frame, Frank Pucci got in on the act as Bryce Yetman found the Sault Ste. Marie native on the doorstep for another tip in and a 2-0 lead at the 11:50 mark of the first.

Aurora would solve Wellington starter Jonah Capriotti near the end of the frame as Austin Eastman was able to take a loose puck at the side of the net after the Duke netminder made three stops off a 3-on-1 rush and the Tigers finally pounced on a rebound.

That would do it for the scoring as Capriotti stopped all 18 Tigers shots through the second and third periods.

The coach said both teams had chances in the rest of the game but he really liked the way his goaltender withstood the pressure.

“Capriotti was really good down the stretch,” Druce said.

After stealing Game 1, Druce and the Dukes had to know Aurora would be trying to steal home ice advantage back in Game 2 but Wellington rose to the challenge and simply out-skated the veteran Tigers squad.

Even after a giveaway led to an early Tigers goal off the stick of Elijah Gonsalves in the opening two minutes, Wellington was as calm and collected as they have been at any point in this 2018 playoff run.

Facing Aurora netminder Jack Irvine for the first time in the series, Wellington got to the younger Tigers goaler early as Mitch Martan found Teddy McGeen on the doorstep at 3:45 for an equalizing powerplay marker early in the period.

Later in the frame, it became the Yetman show as the Whitby native struck for a pair and a 3-1 lead. Snell found Yetman creeping in from the point and the former OHLer showed that Major Junior release, picking the corner on Irvine at 10:13.

Later in the period, it would be Josh Supryka making a shot block at the blueline with the puck dribbling to Pucci.

Yetman had already blown the Wellington zone and Pucci made a nice head-man feed for Yetman who had all day to deke Irvine and make it a two goal spread in favour of the hosts with 2:30 left in the stanza.

Despite leading 3-1 after one, Wellington was about to play their best period of hockey in the second frame as their speed was too much for Aurora to handle.

“I thought we came out and we didn’t play like we had a two goal lead, we played like we wanted to keep the hammer down and nothing was going to change,” Druce said “We executed every shift and really showed we wanted to stay in the position we were in.”

Wellington out shot the Tigers 15-8 and outscored them 1-0 in the period after Mendonca was able to shovel home a loose puck with under five minutes to play in the frame after a 4-on-2 rush failed to click just seconds earlier.

Predictably, Wellington had to survive a push back from the Tigers at the start of the third and Capriotti needed to be sharp for the first five minutes of the frame until Wellington got their legs moving again.

Tigers coach Vince Bellissimo would lift Irvine early and the gambit paid off as Tiger Zach Wilkie was able to bang home a goal on the door step with 3:57 left in the contest.

But before Wellington had a chance to sense the collars on their jerseys tighten and sense those familiar feelings of panic, it was the leadership of Yetman and his fellow Jr. B call ups that sealed the deal for the hosts.

Just 23 seconds after Wilkie made it 4-2, Pucci and Yetman would combine on a nice 2-on-1 rush with Pucci feeding Yetman for a hat trick goal and a restored three goal lead.

Supryka added his second helper of the game in setting up the odd man rush and the line has really taken over some of the heavy offensive lifting for the Dukes in this playoff run.

“The depth is huge but the presence of Yetman, Supryka and Pucci have both inspired our guys and pushed the entire team to be better,” Druce said.

On the backend, Andrew Barbeau, through steady physical play, has solidified and bolstered a blueline that was a little green coming into the second season. “There’s an experience factor and all the call up players that have come in can help their teammates by leading on and off the ice and doing all the little things that it takes to win hockey games,” Druce added.

Aurora will no doubt be a hungry and desperate hockey club that will try to exact a physical toll on Wellington at the Aurora bandbox Tuesday night.

Druce and the Dukes know this.

“The key is be ready for (the physical push back) and understand that’s what’s coming but also don’t worry about them too much and just focus on what we can control and how we can respond within our own game,” Druce said on how Wellington will approach Game 3.

‘Round the ‘Roc: Supryka’s two points in Game 2 was the most he’s had in a Wellington uniform since Feb. 17, 2015 when he had two goals and an assist against a team called the Hamilton Jr. Red Wings…Former Wellington Duke player and coach Todd Reid was formally named the club’s General Manager prior to the start of the third round…Wellington’s attendance has ballooned in the later stages of the playoffs. The club drew over 1,000 for Game 7 of the Newmarket series… Some longtime Dukes observers noted that Saturday night’s contest might have been the first Saturday night playoff game in the history of the franchise and certainly the first since the move from the old Dukedome to Essroc Arena. Wellington did play in the 2014 Dudley Hewitt Cup final game on Saturday, May 3, a 2-1 loss to the DHC Champion Toronto Patriots…Over in the 2018 Southwest Conference finals, the Pats and the Georgetown Raiders find themselves tied 1-1 going into tonight’s Game 3.