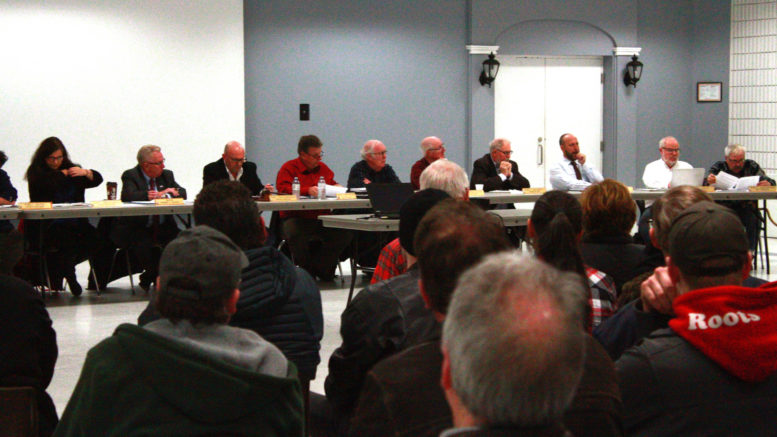 Council listens to public comments on the farm tax ratio on March 1. A new committee will look at ways to provide financial assistance to young and new farmers. (Chad Ibbotson/Gazette staff)

Terms of reference for a new ad hoc committee focused on assisting young farmers will appear before councillors next week.

The new committee will be tasked with examining ways in which the municipality can provide financial support for young and new farmers who could be negatively impacted by rising farmland values.

At their March 13 meeting, following discussion on the farm tax ratio, council voted to create the new committee to identify ways to mitigate the increasing costs. There was some urgency as councillors looked to have the measures in place before the end of 2018.

“A healthy and vibrant agriculture sector in Prince Edward County must include young farmers and producers,” Mayor Robert Quaiff says in a news release from the municipality. “Council recognizes some farmers — especially those just starting out — face challenges due to the increase in assessed values of farm properties. The ad hoc committee will work quickly to identify tangible ways to address these issues.”

The committee will include members from a variety of stakeholder groups and will examine ways to support young farmers. They’ll specifically be looking at a grant program.

County staff will be presenting the committee’s draft terms of reference to councillors at their April 12 committee-of-the-whole meeting. Members of the agricultural community as well as the broader public will have a chance to offer feedback on the committee’s proposed scope of work.

While council ultimately voted to keep the farm tax ratio at 25 per cent following last month’s discussion and public consultation, councillors did want to try to mitigate some of the barriers to those just starting out in the sector. Quaiff said after weighing the options, council decided the best approach was to maintain the ratio and explore other ways to support those working in agriculture.

“When looking at setting the tax ratios for 2018, council had to make a tough decision,” Quaiff says. “We tried to strike a balance between fairness for all ratepayers and a desire to support and strengthen a key economic sector for our area.”

The news release says the municipality has committed to promoting and supporting traditional agriculture, value-added agriculture, and agri-tourism. The release also offered some examples of measures already underway to support local farmers such as participation in regional agri-asset inventory with the Ontario East Economic Development Commission, and active workforce development and matching for farm labour through the Prince Edward County Job Fair. Additionally, traditional farm structures are exempt from development charges.