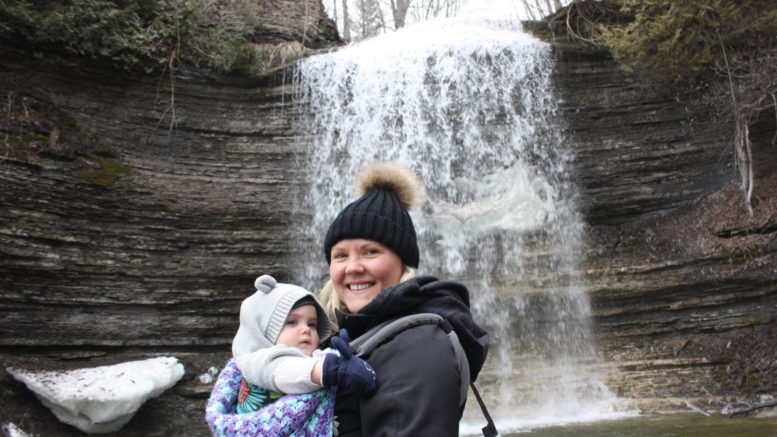 It was another record-breaking weekend for organizers of the annual Rotary Club of Picton’s waterfalls tour.

Over 4,200 people took the opportunity to support clean water initiatives in developing countries and enjoy the splendour of rushing water cascading from high locales at a pair of locations in North and South Marysburgh wards.

Jackson’s Falls, just outside of Milford, and Cape Vesey, east of Waupoos, were once again popular destinations for families looking to work off some of that Easter ham and maybe snap a picture of the ‘rarely seen’ natural beauty although that common descriptor might need to be retired as it seems the crowds get larger with each passing year.

Picton club member and tour organizer Jim Hughes was thrilled to report that 2018 was the best year yet in terms of both dollars and donors.

“We hosted a record number of people and took in a record amount of donations,” Hughes told the Gazette.

As part of their mission to provide service to others, Rotary International believes clean water and sanitation is a human right and when people, especially children, have access to clean water, sanitation, and hygiene, they lead healthier and more successful lives.

Last year, the $7,300 raised by the Picton club through the 2017 tour assisted the construction of a water sanitation project in India and a new water filtration plant in rural Mexico.

The record amount that was raised this weekend will be designated to future projects later this summer and it was Hughes’ hope that the Picton Club would be able to partner a fellow club so that “We really leverage the amount of money we’ve raised and maximize our efforts through grants.”

As for the falls, Hughes said a mid-week rain shower and then a Saturday night down pour increased water volume at both locations.

“They looked great and the comparison to last year indicates the flow was better in 2018,” Hughes said.

The tour is courtesy of the landowners who permit usage of their property each Easter weekend for the Picton club to fundraise for a good cause.

“We really thank the landowners. We are so dependant on them,” Hughes said. “They are so welcoming to invite visitors on their property and offer the opportunity to share the this spectacular view of nature. I know they appreciate having their waterfalls support other water projects in other places in the world.”

The crowds of people attending each site were a mix of first-time visitors to Prince Edward County, regular attendees and even long time local residents that were taking the opportunity to visit the falls for the first time.

“It’s amazing the the cross-section of people that attend,” Hughes said. “We had a family from Mexico and visitors from Vancouver sign into our ledger this year.”