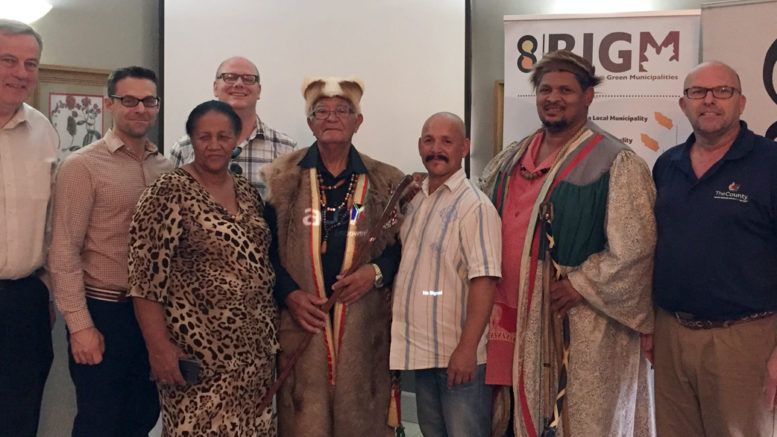 County representatives believe there’s plenty to be shared and gained through a partnership with a South African municipality.

FCM delivers the program, which is funded by the Canadian government through Global Affairs Canada.

The County’s participation in the program was approved by council for a three-year term in June 2017 and representatives from Kouga first visited Prince Edward County last October.

Carbone said while there has only been one trip and the partnership is just getting established, it has been a great experience so far. Having taken part in council’s previous partnership with FCM, the Caribbean Local Economic Development program, Carbone said the programs can provide valuable experience in several areas. Those include navigating challenging political situations and understanding how other municipalities deal with similar issues.

“All of it is of the sort that’s difficult to get that intensely through courses or conferences or things like that,” he said. “Considering that FCM and the Canadian Government pay for the cost of the program, and really it’s just our in-kind contribution, our time to participate, the value is significant.”

While the program was envisioned to focus on climate change, capacity building, and asset management, the focus shifted to local economic development following discussions between the partners.

Carbone said much of the initial visit was devoted to learning. The County delegation met with Kouga’s Business Forum, the local equivalent of a chamber of commerce, as well as other stakeholders to get a better understanding of local issues.

“We met business owners and entrepreneurs and sole proprietors, and heard some feedback from them,” said Carbone. “Really, we started to focus on what the priorities should be.”

That municipality is also going through some reorganization, something Carbone believes aligns well with the FCM project. Since Kouga is bringing new staff on board and doesn’t yet have a formal strategy in place, the County has begun working with them at an opportune time.

“We’re not having to work against any existing structures or systems which may not be totally appropriate or may have been old, they can really start from scratch,” he said. “This (trip) was really about consultation, data collection, meeting all of the players.”

Now that the initial trip is over, the work is beginning to ramp up. Local representatives communicate with their counterparts in Kouga every few weeks. They’ll be working out plans for the partnership moving forward and defining areas where the municipality could best provide assistance.

“Usually after this type of mission, you develop those type of things within the next two or three weeks afterward,” said Carbone. “We’ll be doing some back and forth with them on that shortly.”

On March 29 the County delegation gathered with local representatives in Kouga to sign a memorandum of understanding for the partnership. While both municipalities had already signed on, Carbone said the signing was a ceremonial reaffirmation of their pledge to work together on local economic development issues.

That’s one area, he said, where the County has plenty of knowledge to impart.

Kouga and Prince Edward County are similar in a lot of ways. Both are located on water. Both have a strong tourism economy and both face the challenges that come with the seasonality of that economy.

There are also key differences. Where the County faces a lack of workforce for the available jobs, Kouga has the opposite problem — high unemployment and few open positions. Carbone said he believes the municipality can help.

“We’ve seen the growth of the economy in Prince Edward County over the last 10 to 15 years,” he said. “We have some ideas of how jobs can be created, so that’s a good fit with them.”

Kouga has its own blend of unique issues; housing and land ownership challenges are very different. Carbone said many decisions in Prince Edward County benefit from a lot of public engagement and work with stakeholders, and that’s another piece of advice the County could offer their partners.

“Organizations work very closely with one another and that’s something where there seems to be some room for growth in Kouga,” he said. “That will help inform some of their strategies and decisions.”

The partnership won’t be about installing County solutions in Kouga. Rather, it will be about helping representatives there identify the best way forward.

“It’s not always about trying to transplant the same kind of program that you run here but it’s the best means of arriving at the program and what it looks like,” he said. “We’re really strong in working with our partners to figure out the best way to address things. We’ll be helping them to go about things that way as well.”

The County can also learn from Kouga and that outside perspective has already had some impact, said Carbone. While visiting Prince Edward County in October, Kouga representatives remarked on an apparent lack of youth representation.

“That is something that is very strong in Kouga,” he said. “They have a lot more youth, a lot more young families and they engage them more than we did.”

Since that time the municipality has taken some steps to address the issue, adding a youth representative to the local Community and Economic Development Commission and working more closely with the Recreation Outreach Centre. While those measures weren’t necessarily spurred by the visit, the comments were taken seriously.

“To have someone come from outside the country and point out that they don’t see as much youth involvement as they themselves have in their own community was an eye-opener for us,” Carbone said. “That was just on the very first mission and it was something we really took to heart and we immediately tried to address with some more involvement, consultation, and partnership, working closely with agencies like the ROC.”

He said that’s just one early example of how a different perspective can help the municipality recognize issues.

In terms of the impact on work flow at home, Carbone said much of the work on the Kouga project takes place outside of regular work hours and wherever else staff can fit it in.

“Obviously, when they had a mission here, we were taking time because they were here during the day, during the week, but otherwise a lot of that work just happens on your own time,” he said. “You put in time outside of the regular work hours and we stay in contact via email on important issues and things that are going on.”

While federal funding covers the travel and accommodations costs, municipal staff receive their regular wage during the trip. Carbone said some of the return on that investment comes in the form of professional development for staff.

“It’s actually a value to the County because we’re not spending dollars here to send somebody away to a conference or a training course,” he said. “As valuable as those things are, as important as they are, it doesn’t provide the intense learning experience this kind of hands-on mission would when people are working on that — there’s a lot of value.”

“The value comes from understanding each other’s problems and applying how we address those problems and sharing that information with each other — that’s pretty valuable,” he said.

He said it was an intense experience. During the weeklong visit, the County delegation attended several council meetings, workshops, and roundtables. Days typically began at 7 a.m. and ended around 7 p.m.

“There was an extraordinary amount of time spent on this,” he said.

While he acknowledged some may criticize the expense in staff time, Ferguson said the trip was extremely worthwhile and didn’t impact County operations.

“Because of the Internet, the various issues that staff may have had to address in person here were addressed remotely and I know they were because I saw them being done and we talked about them,” said Ferguson. “Yes, there was the absence of three people from the municipality, but I don’t think there was any loss in their capability or diligence in dealing with issues at home.”

A report with more information about the visit is expected to come to council at a future meeting.