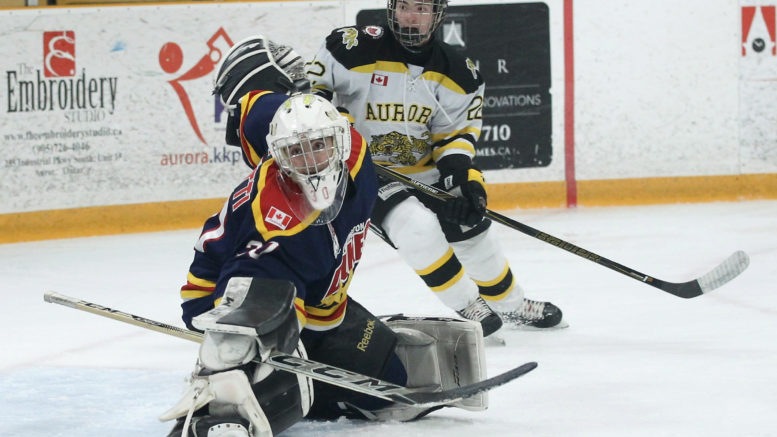 UNDER FIRE- Wellington Dukes netminder Jonah Capriotti was under pressure Tuesday night as the Aurora Tigers had 11 power play opportunities in Game 3. Wellington fell to Rizvan Mansurov and the Tigers 6-2. (OJHL Images/Tim Bates)

After falling behind 2-0 in games, the Aurora Tigers clawed back Tuesday night as the veteran club downed the visiting Wellington Dukes at the Aurora Community Centre.

Wellington, up a pair of games in the 2018 Buckland Cup Semi-Finals thanks to wins in Games 1 and 2, fell behind 4-1 after two periods thanks in part to some undisciplined play and a Tigers power play unit that struck for four times on 11 opportunities.

Aurora’s James Thomson and Brock Welsh both got man-advantage goals to open the scoring before Wellington countered with a Teddy McGeen goal near the end of the opening frame to make it 2-1 after one.

In the second, it was a continuos march to the sin bin for Wellington as the club incurred the wrath of the officials, taking four minor penalties resulting in power plays for Aurora.

Elijah Gonsalves scored on the power play at 11:47 of the second and then Even Bidenti added a rare even strength goal at 15:05 to make it a three goal spread in favour of the hosts at the second intermission.

In the third, Luca Esposito killed whatever doubt anyone might have had of a late Aurora collapse at 9:20 to make it 5-1 Tigers.

Later, the Tigers once again roared on the power play as veteran OJHLer Austin Eastman bagged his second of the series.

Wellington would manage a late power play goal of their own as Bryce Yetman picked up his fourth goal of the best-of-seven set to make it a 6-2 final.

In his second straight start for the Tabbies, Jack Irvine stopped 21 Dukes volleys while Jonah Capriotti had 19 saves on 25 Tigers attempts.

The Dukes will look to push back on Friday night as they host the Tigers for Game 4 at Essroc Arena.