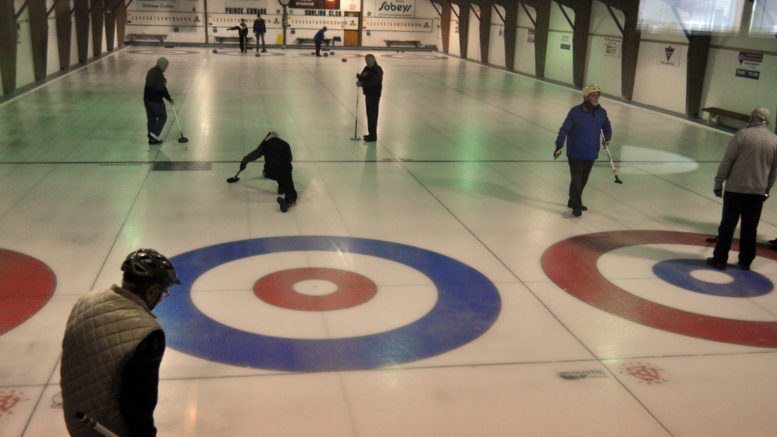 With support from an Ontario Trillium Foundation (OTF) grant announced today, the membership of the Prince Edward Curling Club is about to put itself on new footing for the first time in 55 years. 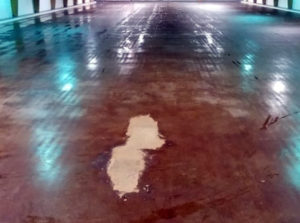 Uneven – The original floor at the Prince Edward Curling Club shows signs of uneven wear. The club’s members have been working for the past two years on a plan to install a new surface above it. Following word of a successful Ontario Trillium Foundation grant, the work will begin this month. (Submitted photo)

The club received word it has been approved for $39,800 toward a $100,000 project to install a new insulated and level floor atop the original surface that dates back to 1963.

President Ron Stakes said the club knew it needed to improve the floor for some time. Wear over the years, coupled with changing technology made it a pressing issue for the future of the not-for-profit organization.

“Over the years, we’ve had some sediment blockages in some of the (refrigeration) lines, we’ve had some leaks, and we’ve had some settling because they didn’t have the technology back when it was first put in to do these kinds of things. The connection back to the ice plant needs some work too,” Stakes said.

That uneven floor can be tricky for ice makers because it forces them to have ice of varying thickness, which means a different surface temperature depending on location. In a sport where competitors are looking for consistency to know what weight to put on their shots and how hard to sweep, it can be problematic.

“It can affect the running of the rocks and how long the pebble lasts before it breaks down. It makes a huge difference,” Stakes said.

Operational efficiency is also affected by a lack of proper insulation. Stakes said when ice makers start preparing for the curling season, they need to create permafrost below the surface before it can freeze. That’s difficult on the ice plant. It also typically means four or five weeks of lost curling that could be gained back with a modernized system.

About two years ago members started seriously planning to rebuild the floor. Stakes noted they had no experts on refrigeration or insulation among their midst, so they simply asked potential suppliers a lot of questions and picked up leads along the way. Life member Bob Evans was instrumental in sourcing new technology and materials. He actually found a cost-effective insulation that’s often been used in basements of houses with radiant heat that was a byproduct of insulated garage doors and sidewalls.

“It’s stronger than regular styrofoam, has a better R-value, and is half the cost.”

After evaluating materials and honing their understanding of the job at hand, the membership found their project could be done within the $100,000 budget they initially estimated and they also discovered they could add new LED lights that would help save 60-per-cent of their lighting costs in a given year. Part of the trick for their budget was sweat equity.

“We’re doing all the preparation work to get ready for the concrete. I’ve estimated about 1,000 hours the members will donate to be able to pour the concrete on May 23,” Stakes said.

Another part of the plan was a demonstration that a small, volunteer-run club could raise the necessary funds. Over the past year, members donated $35,000 for the project. The club held a benefit dance last summer to raise funds, where they were given an additional $10,000 from the Prince Edward County Cattlemen’s Association. The Rotary clubs in Wellington and Picton also helped.

The last piece was the OTF application, which the club applied for in October after demonstrating its fundraising commitment. Stakes put together the application and said his challenge was a typical Trillium request to have three contractors quote a capital job. Instead, the club had to collect prices for the components and materials it needed to install.  In early March, word came that the OTF had supported the club for a third time in its history. Past projects included a replacement kitchen range hood and a set of little rocks that encouraged young curlers to participate in the sport.

With funding in place and leagues ending this week, work will commence immediately to be ready for the installation.

“We finish curling Friday night. We’re going to turn the ice plant off and turn the heat on. As soon as we get rid of the ice, we’ll get rid of some permafrost,” Stakes said. “On April 23, we’re going to come in with some volunteers and start preparing for the concrete. We have to remove all the side boards and end boards. We’re going to put down insulation and then we’re going to set the concrete forms. Once that’s done, there will be the puzzle of putting in the pipe chairs, pipe, rebar, and wire mesh.”

Stakes said he is hopeful the new floor will last at least 40 years, providing for regular physical activities not only for members, the broader community. The club hosts elementary and secondary school curlers and Special Olympians on a weekly basis. During the summer months,  a number of community shows and events are staged on its floor. That will continue in the future.

Efficiencies created by the project will be directed back into the club facility for future improvements including a kitchen renovation.

The OTF grant was one of 225 across the province released as part of a $37-million commitment this morning. It was the only one from Prince Edward County among the 16 approved in the Quinte, Kingston, and Rideau funding region. OTF board chair Tim Jackson indicated the granting program offers wide-ranging benefits.

“At the Ontario Trillium Foundation, we understand that the projects we fund are as diverse as Ontario’s population. We are committed to ensuring that we reach all of Ontario and we are inspired and encouraged by the innovative projects that will improve the wellbeing of all Ontarians,” he said in a release.