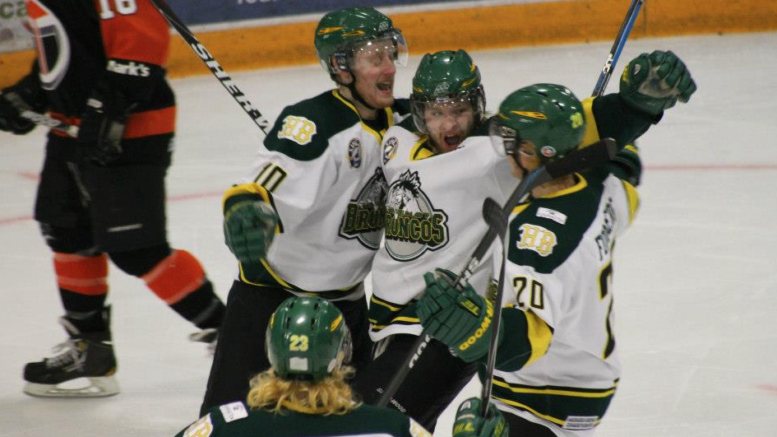 The hockey community was shaken this weekend at the news of the Humboldt Broncos bus tragedy, but the grim spectre of the sudden loss of 14 members of a Junior A hockey team on a road in north central Saskatchewan fell a little closer for a Prince Edward County native.

Joey Davies, a Demorestville resident in the off-season, is a Humboldt Bronco alumnus, having played out his junior hockey career with one of the Saskatchewan Junior Hockey League’s flagship organizations from 2011 to 2013.

In two seasons, Davies suited up 132 times for the Broncs including post season play and parlayed his time in Humboldt into an opportunity to play NCAA hockey in the United States. 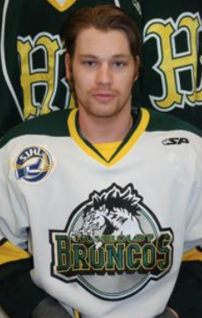 Even though the bench staff has changed and there were no longer any direct playing connections in terms of teammates, Davies told the Gazette he was emotional when he learned about the accident that claimed the lives of 10 Broncos players, two coaches, a team volunteer, a broadcaster as well as the bus driver.

Finishing up his first pro hockey season in Germany, it was Davies’ sister who actually tried to reach her brother on the other side of the world to tell him what had transpired at an intersection just 20 km south of Nipawin, Sask. where the Broncos and Hawks were to play Game 5 of the 2018 SJHL semifinals.

“I found out the next morning due to the time change here in Germany. Megan actually had tried to call and had texted me. She works at the hospital in Saskatoon where some of the players were brought in. She had received a call and then tried to contact me,” Davies told the Gazette via e-mail. “ My reaction was one of disbelief. It was tough to come to terms with what had happened. I really was at a loss for words for a while and definitely shed a tear or two.”

Davies had been playing closer to home having suited up for the Trenton Golden Hawks in 2010-2011 but wanted to experience hockey and culture in Western Canada after graduating PECI.

“I felt a change was needed for my career and for myself to get better. Humboldt was interested and as they were hosting the RBC Cup it was an easy choice for me to go there. The deal was done and I was very excited to start a new adventure,” Davies explained.

Living away from home in the first time in a small and remote community might have fazed some Junior hockey players but having a deep connection to a rural community like Prince Edward County helped Davies get over any preliminary pangs of homesickness.

Much like the case in Wellington and Prince Edward County, everyone knows about its junior hockey organization and it serves a sense of civic pride in the cold, brutal winters.

“The community there was incredible. It really gave you a proud feeling when you put on that jersey. People in the town knew who we were and always supported our team. They gave us a very home-like feeling. I am happy to call Humboldt home and have made connections that will last a lifetime,” Davies said.

In a bit of a twist, it was the Broncos franchise that eliminated the Wellington Dukes at the 2003 RBC Cup in Charlottetown, PEI and the Broncos would wind up hosting the 2012 RBC so Davies was able to experience Canada’s national Junior A championship.

He said the town and organization had a substantial impact on his hockey career and credits former head coach Dean Brockman in moulding the Prince Edward County product into a complete hockey player.

“He helped me adjust to the western style of play and really improved my game. I’ll never forget the cold nights and the long trips. Winning a championship with them in 2011-2012 over the Portage Terriers in seven games will always be a special memory as well. Losing in the finals the next year to Yorkton also taught me how to be a better player,” Davies said. “I will never forget the people from that community and my billet family. They were so great to me during the two years. I still keep in contact with them.”

Since the accident Friday evening, people from all over the globe have been reaching out and embracing the community of 5,000 which Davies likens to Picton in the way that everyone knows everyone and it is very close-knit.

Hockey teams from the National Hockey League to the Provincial Junior Hockey League have had moments of silence and turned games into fundraisers for Humboldt and the organization and a virtual “hockey hug” in the form of vigils at rinks across Canada have shown solidarity with the small agricultural community.

“I’m very surprised at all of the support. It has been amazing for this community as they need it the most. The Broncos are a family, you felt like a family there, and it really goes to show how amazing the hockey world is. I’ve had people here in Germany send me messages regarding the accident and it’s overwhelming. We are all a big hockey family, no matter where you live. I’m thankful for the support and if it was another community, I’m sure Humboldt would be doing the exact same, if not more,” Davies explained.

As for his own season, Davies’ Limburg Rockets wound up falling in the 2018 Eishockeysport championships but the speedy forward was second in league scoring with 93 points in 29 games.

“Pro hockey here is definitely different. More guys are working and have part-time jobs, so most of the time is spent at the arena and in the gym trying to get better. I watched a lot of Netflix shows (laughs) and also travelled a little when we get the chance,” Davies said “My future goal is to keep playing and move up, hoping something will come up where I can play in a better league and do well for myself there.”

For more information on the Gofundme fundraising effort that was launched immediately after the crash by members of the Humboldt community, please visit https://www.gofundme.com/funds-for-humboldt-broncos