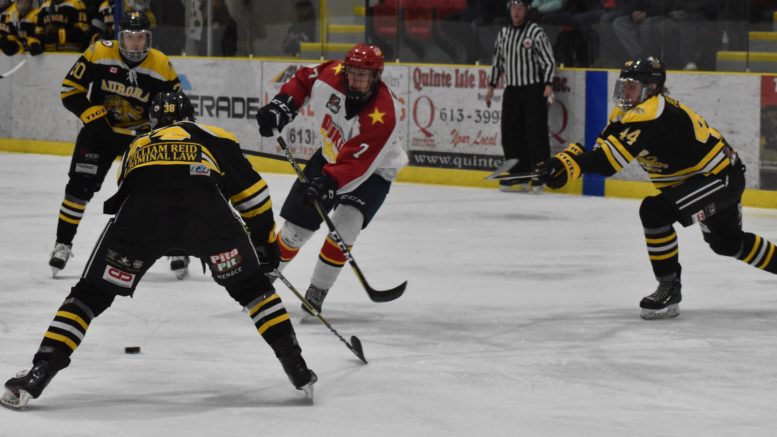 It’s back to the Buckland for the Wellington Dukes!

The club clinched its fifth conference title in team history Sunday night when they vanquished the host Aurora Tigers in double overtime in the fifth game of the 2018 Ontario Junior Hockey League’s Northeast Conference finals.

Wellington last played for the Buckland Cup Championship, emblematic of OJHL post-season supremacy, in 2011 when they beat the Oakville Blades in five games. 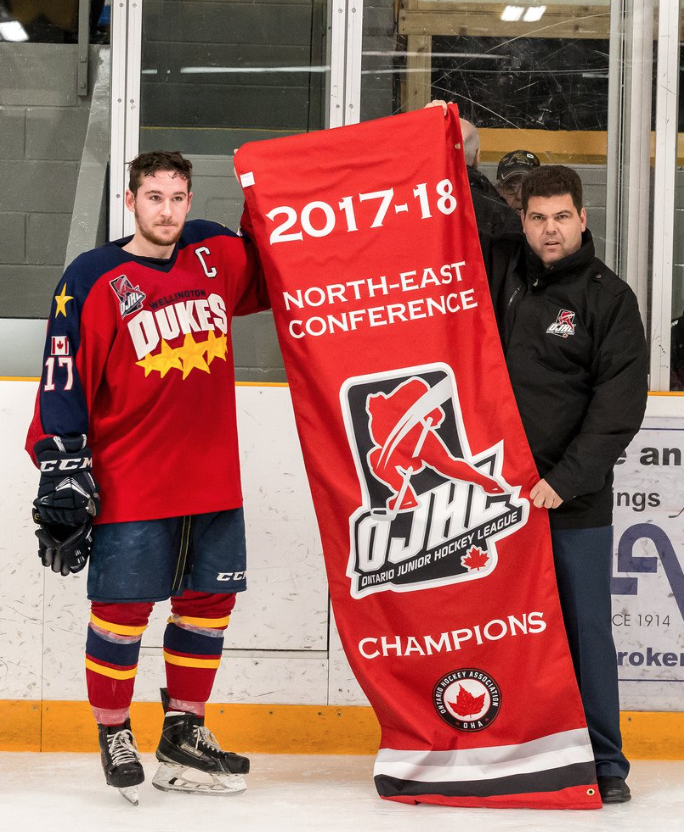 Playing with a chance to punch their ticket to the OJHL Finals, the managed to do couple of things Sunday night they had failed to do thus far into the 2018 post season.

That is win an overtime game on the road and, more importantly, eliminate an opposing team prior to Game 7.

With their 3-2 double overtime win, Wellington will now wait for the winner of the seventh game of the 2018 Southwest Conference finals series between the Georgetown Raiders and the Toronto Patriots.

For Wellington and their fans, including scores that made the trek to the Aurora Community Centre Sunday, it was an unforgettable night in a post season run that’s seen the locals stave off both the Pickering Panthers and the Newmarket Hurricanes in thrilling seven game sets.

The teams traded goals in the first and the second and played a scoreless third to set up the extra sessions.

Wellington opened the scoring with just over five minutes left in the opening stanza as Teddy McGeen made a nice pass to Mitch Martan near the hashmarks for a 1-0 lead.

But Aurora would tie it with a powerplay goal as Austin Eastman beat Jonah Capriotti off a rebound with under two minutes left in the frame.

In the second, it was the Tigers gaining their first margin of the contest when Eastman drove to the Wellington net and then spotted Zach Wilkie cruising to the slot at 6:21 for another Aurora powerplay marker.

The lead lasted less than a minute however as Josh Supryka placed a beautiful backhand effort over Tigers Game 5 starter Bradley Van Schubert to knot it at 2-2.

There the score stayed thanks to the heroics of Van Schubert and Wellington starter Jonah Capriotti.

Finally, after both teams had tested the netmidners and the goal posts to their limits, Wellington got the break they needed to push by the Tigers.

“It’s not something we encourage regularly but if the opportunity  is there, you have to take the them and when you see that loose puck laying there and you think you can get to it first, you have to go,” Wellington bench boss John Druce told the Gazette Monday.

That golden opportunity that put the Dukes ahead to stay Druce spoke of came off somewhat disjointed 2-on-1 rush between Supryka and Bryce Yetman.

Yetman was able to collect a flip pass just inside the Aurora zone and deliver it to the net towards a streaking Supryka.

Supryka’s tip shot would be handled be Van Schubert but the puck squirted free and seemed to lay between the netminder and Zach Uens who was following up on the play for eons.

The rookie Dukes blueliner could never be accused of playing it conservatively at any point this season and the hockey club is thankful for that on Monday.

Uens jumped the play and managed to lift the puck over a prone Van Schubert for the series winner 89 seconds into the second overtime.

“There’s a lot of pressure and nervous energy going on in a game like that and sometimes you might find yourself in situations where you shouldn’t or wouldn’t be but it was a huge goal for Zach and for the team,” Druce said.

A huge goal that ended a tough and bitterly physical series where Wellington held the edge in terms of speed and cohesiveness and the Tigers were a punishing force at the comfy confines of the ACC.

This was evident in Game 4 in which Wellington was able to skate away from the Tigers at Essroc Arena in a 3-0 whitewash.

The larger ice surface suited Wellington better as Yetman counted twice and Uens defence partner Declan Carlile created an odd man rush from a loose puck in the Wellington crease and ripped a snap shot over the shoulder of Tigers starter Jack Irvine. 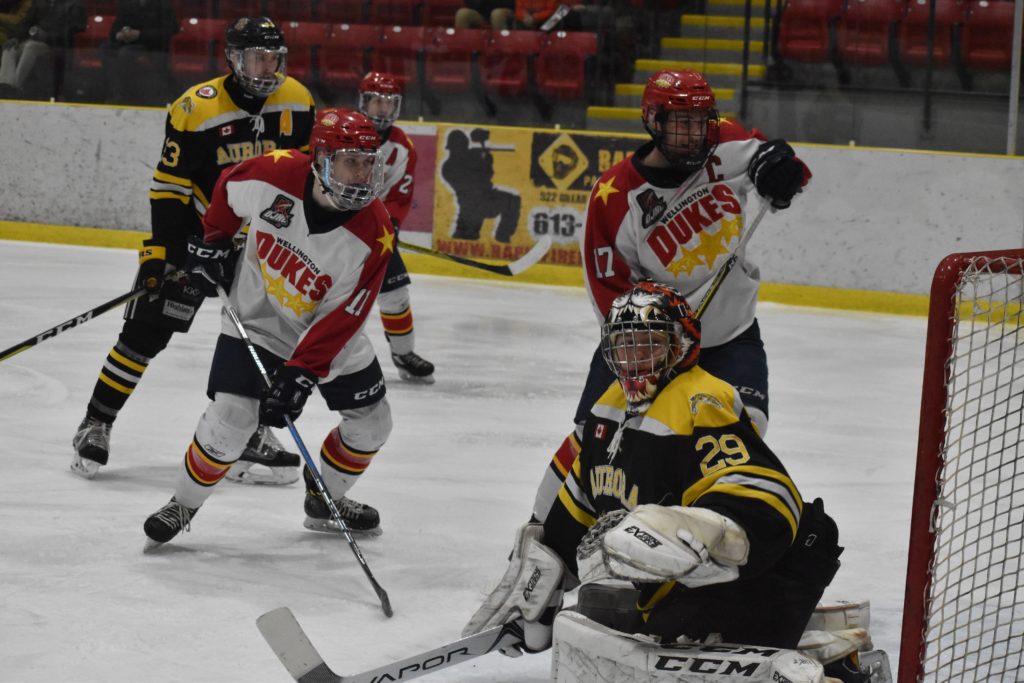 Capriotti made 30 stops for his first OJHL post season shutout and Wellington certainly have developed some stinginess at an opportune time.

Wellington has surrendered two goals or less in six of their lest seven games with a 6-2 loss in Game 3 of the Conference finals where Aurora was handed 11 powerplay opportunities and scored on four being the lone exception.

When asked to point out how Wellington was able to defeat Aurora in five games while it took his squad seven for Pickering and Aurora, Druce said the Dukes defensive structure is getting better.

“In all reality we are getting better defensively as the playoffs go on,” Druce said. “Getting the experience and starting to believe in yourself and believe in each other is another aspect and that’s been a huge part of this run. You can’t replace experience and these players have faced and battled adversity and they’ve really come together as a team and really want it for one another.”

After playing 19 games in 39 days, the hockey club was staying away from the Dukedome on Monday.

“The guys have been going hard for a long time and it’s an opportunity to get the bodies rested and then get ready for the next round,” Druce said.

Now matter who comes out of the Southwest conference, Wellington will be facing a well coached and experienced hockey team.

“We are going to prepare the best we can by watching some games and have a couple of sharp practices and get ready,” Druce said.

‘Round the ‘Roc: Both clubs honoured the Humboldt Broncos organization prior to puck drop with both teams intermingling around the centre faceoff circle…Capriotti might not have had to make as many 10-bell saves his counterpart in Game 5 did but still managed a full night’s work, making 26 saves…Over 1,100 packed Dukedome Friday night and the 50/50 was announced at over $1,400…Wellington played both the Patriots and Raiders once this season on the road and lost both times…Doyle is Wellington’s leading playoff point getter with 22 in 19 games. Yetman has eight goals in nine games…Supryka’s goal in the second period of the Game 5 was his first in a Dukes uniform in 1134 days…Fan busses made the trek to the ACC for Games 3 and 5. With Wellington likely to open on the road on Friday, a fan bus for Game 1 is being organized. For more information, contact Ed McPherson at 613-848-0056 or through the Wellington Dukes Facebook page…Head-to-head, Wellington now holds a 3-1 edge all time against Aurora, besting the Tabbies for the Ontario championship in 2003 and losing to the Tigers in 2007 finals. Wellington also beat out Aurora in the opening round of 2016 OJHL playoffs.