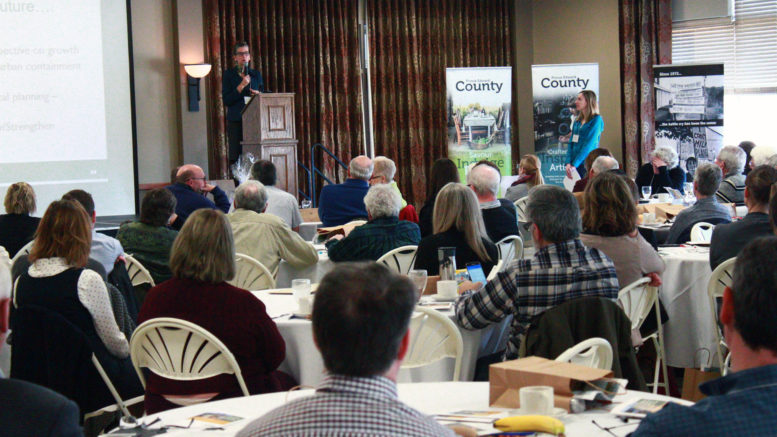 There were several important takeaways from last week’s Farmland Forum.

The 2018 incarnation marked the 14th anniversary of the Ontario Farmland Trust-helmed event and discussions focused on the theme of “Building Farmland Viability in Ontario.”

Dennis Dick, a director with the Prince Edward Federation of Agriculture, said there was good representation from local farmers and felt there was a great deal of local interest. For him, the forum really hammered home the importance of protecting farmland.

“There are 175 acres, and it might be more than that, taken out of agriculture every day of every year,” he said. “If we want to have food in this country, we have to slow that down — there’s such intense speculation pressure.”

Even though there’s been a lot of talk about protecting farmland through the years, Dick said not enough is being done.

“We don’t do a good enough job and the importance of that is based on a deep respect for preceding generations that have been on the farms,” he said. “I can only imagine the hardship they went through to try and keep their land working — illness, blood, sweat, and tears.”

One way of protecting that land, which many may not know, is through the Ontario Farmland Trust itself. The organization works with farmers and other farmland owners to protect agricultural land through tools like farmland easement agreements. The process is entirely voluntary and reserves the land for farming in perpetuity.

“If I was retiring and I wanted to save that farmland I can have that stipulated in the deed and it goes into this trust and it’s saved for food production,” Dick said.

With farmers often too busy to consider larger matters of policy and farmland protection, Dick said the measure is a simple and effective way to ensure their land remains in agriculture.

Councillor Bill Roberts attended the forum and provided some opening remarks on behalf of the municipality’s Community and Economic Development Commission (CEDC). He said the forum was a good chance for local agri-business and agri-tourism leaders to interact with more than 100 farmers and other stakeholders from across Ontario. He said he came away impressed with the number of farmers who attended.

“It was a good networking opportunity that I thought was very timely given the challenges and opportunities for agriculture in the county,” he told the Gazette.

Among the locally significant topics broached during the forum, Roberts said, was Demarchi-Meyers’ discussion on agricultural advisory committees. He said that presentation, in particular, was enlightening.

“We are looking to give more heft to our own Prince Edward County agricultural advisory committee,” Roberts said.

The presentation dealt with how Halton Region has accomplished that. Roberts said Halton’s policies could offer a road map for officials in the county.

“We don’t have to reinvent the wheel per se now, we can sort of look at Halton Region who has looked at this and done some very innovative things very successfully and that’s a bit of encouragement from us here,” he said.

Manley’s presentation on community improvement plans, land use regulations, and processes to support rural business was also timely, Roberts said, as the CEDC is contemplating a focus on agriculture, agri-business, and agri-tourism over the next year.

“In terms of rural economic development and the core role played by agriculture, I thought again it was very useful information to have,” he said.

Roberts too noted the Ontario Farmland Trust’s work to preserve agricultural land. He said there are likely farmers in the county who could benefit from the program.

“This Ontario Farmland Trust is just one voluntary option that may be available to them,” he said. “I don’t think folks were generally aware of that until we had this forum.”

Roberts said the idea of protecting farmland is very relevant to the county. The land use policies and tools discussed throughout the day could provide some keys to effective stewardship of prime agricultural land while striking a balance with population growth and development.

Overall, he said he believes council and the municipality should investigate ways to improve in that respect.

“Just speaking for myself, we could do a better job integrating agriculture, agri-business, into our overall plans for development in Prince Edward County,” he said.

He noted that agriculture is referenced extensively in the County’s draft official plan, however, the municipality’s agricultural advisory committee doesn’t receive as much attention as other advisory bodies.

“We can do a better job in terms of empowerment of our agricultural advisory committee and also integrating it into the larger processes that come before council such as commission activities, heritage activities, development activities et cetera,” he said.

Other presentations came from Ontario Ministry of Agriculture, Food and Rural Affairs (OMAFRA) policy advisor Helma Geerts. She discussed how provincial policy and guidelines on permitted uses in prime agricultural areas help maintain and support the agriculture industry and how farms are diversifying and new agricultural system policies.

Local business owners Caroline Granger of The Grange of Prince Edward Estate Vineyard and Winery, Colin Campbell of The Campbell’s Orchards, and Matt Rabbie of Sunset Farms and Cabins shared success stories and discussed how planning positively impacted their businesses.

Finally, University of Guelph PhD candidate and sessional lecturer Sara Epp discussed how farmland has evolved over time and how it might change moving forward.