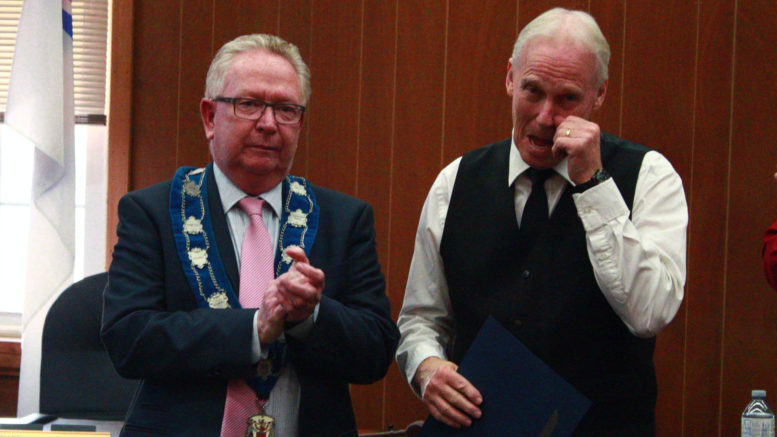 Mike Bond was just a member of the band.

On that mid-December night Bond, a 46-year veteran paramedic and drummer for The Reasons, was at Wellings of Picton playing music for an evening dinner. He thought it was just another gig but, when there was a call for help, his instincts as a first responder took over.

It was Dec. 15, 2017 at about 7 p.m. Norene Pulver and her husband Walter were enjoying dinner when she began to choke. Bond and his wife Brenda were nearby getting food. Bond rushed to Norene’s aid while others called 911. After several tense minutes Bond — with help from Brenda — was able to clear Norene’s airway and resuscitate her while a crowd of shocked guests looked on.

On Tuesday, those actions were recognized as Bond received a civic recognition award from the County.

“Prince Edward County council is proud to recognize you for demonstrating true heroism,” he said. “Your quick action and extraordinary skill were instrumental in assisting Norene Pulver in her time of crisis.”

Bond, who now teaches first aid and CPR, said he was in the right place at the right time.

Bond said he was about to get a plate of food when he heard his name being called. He found Pulver on the floor, her face blue-purple. She was unconscious.

“It was obvious she hadn’t had oxygen for a while,” he said.

Since Pulver was on her back and unconscious, it was impossible to employ the Heimlich maneuver. Calling upon his training, Bond proceeded with chest compressions. After more than two dozen compressions, he began to see some air moving from her mouth. He turned Norene on her side and with three slaps on the back was able to dislodge the blockage.

“My wife, Brenda, was right there with me from the time I was down on my knees supporting the airway,” he said. “It certainly looked like we had lost her but suddenly, after the slaps on the back, Brenda could hear some air movement. We asked everyone to be quiet so we could listen and, sure enough, she started to breathe.”

Less than a minute later, Norene was awake and recognized Bond.

Brenda said it was as if Norene had passed and come back.

“It was like a miracle happening right in front of you,” she said.

Bond said it was wonderful to be recognized but totally unnecessary — he was just doing what he thought was right. He said the best thing is that Norene is alive.

“I’ve been involved with lots of saves as a paramedic, but I was just there as a drummer in the band,” he said. “It was just through the roof good, I’m still high as a kite from the fact that she’s still here. I thank God, for all of us, that we’re all just lucky.”

Norene was on hand to watch Bond receive the award on Tuesday evening. They shared an embrace while a crowd of those who witnessed the heroic actions provided a standing ovation.

Bond was anonymously nominated for the award. The nomination form notes that it was apparent Norene would not be alive today had it not been for Bond.